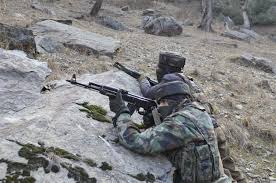 The efforts of a few forces inimical to the interest of the people of Kashmir led to a situation of turmoil in the Kashmir Valley recently. The issues at NIT and the Handwara incident were stage managed, engineered and exploited by such vested interests to cause disruption and dissension within the region.

Security forces were particularly targeted in these incidents. They were subject to humiliating stone pelting to which they responded with appreciable restraint. When this strategy to provoke them did not work the local captive media of the disruptive forces, including the social media, went into overdrive with concocted stories to keep the propaganda going.

Not noticed by many is the fact that despite such physical stress and emotional trauma, security forces remained steadfast in their pursuit to clear the Kashmir valley of the remnants of terrorism.

The month of April, as the earlier months in this year, has witnessed the launch of surgical counter terrorist operations jointly by the Indian Army and the Jammu Kashmir Police with excellent results.

A counter terrorist operation in the Putshai area of Lolab, Kupwara, North Kashmir, on April, 27, witnessed the gunning down of yet another terrorist. His weapon, an AK-47 rifle, has been recovered.

A joint operation in this area, on the basis of specific information about the presence of terrorists, was launched by a combined force of the Indian Army and Jammu Kashmir police on April 21. The operation met with great success with three terrorists eliminated in the initial stages.

The operation has been going on relentlessly over so many days because the security forces wish to ensure avoid collateral damage while not allowing a single terrorist to get away. Their response has been calibrated in view of the presence of civilians in and around the encounter site.

The precise nature of the operation conducted with utmost patience over many days has resulted in the elimination of one more terrorist taking the overall count to four.

That the terrorists killed were heavily armed is evident from the recovery of four AK-47 rifles and grenade launchers besides other military equipment.

Earlier, in beginning of April, four terrorists were killed in two separate operations. Of particular significance was the operation on April 7 in which security forces had, in a well coordinated surgical strike, gunned down two top terrorists of the Hizb-ul- Mujahedeen in Shopian, South Kashmir.

One of the terrorists, Naseer Ah Pandit, had been a Special Police Officer with a minister of the Peoples Democratic Party who had decamped with two weapons in March 2015. He did not live long after having taken this foolhardy step.

A spike in terrorist activity at this time of the year is along expected lines in view of the opening up of the weather and melting of snow in the higher reaches. Terrorists operating in the Kashmir Valley would be under pressure from their masters across the border to produce results and also facilitate infiltration of fresh cadre.

Infiltration attempts are likely to see an increase in the coming days for which reason cross border firing will also be resorted to leading to ceasefire violations. In this context facilitating infiltration in the higher reaches of Lolab gains significance since the area is a traditional infiltration point due to a terrain that assists such an activity.

Terrorism in Kashmir, over the years, has been sustained by ISI mainly through terrorists of foreign origin with the local cadre playing a subservient role. Today, there is a situation where the number of foreign terrorist operating in the valley is less than forty percent of the total estimated strength of operative terrorists, which is estimated to be 180 to 230.

The dwindling strength of the foreign cadre, coupled with inability to infiltrate reinforcements, is posing a big challenge to the ISI towards maintaining the desired threshold of terrorism and violence in the Kashmir valley.

The proactive response by the Indian Army is putting paid to all attempts being made by the ISI and its stooges in this direction.

The problems of the terrorist organisations are going to increase in the coming summer months. With the kind of human and technological intelligence now available with the security forces this would be the right time to track them down and systematically eliminate them. The pressure that has been built and the psychological advantage that has been gained by the successful counter terrorist operations in recent times should not be lost.

The situation in Kashmir now is clearly advantage security forces. All effort, therefore, needs to be directed towards exploiting the visible chinks in the Armour of the terrorists.

Relentless operations of the type carried out in Lolab and Shopian would pay heavy dividends; politically it has to be ensured that the recruitment of local terrorists is curtailed. A well thought out synergetic strategy will accrue excellent results.

During a recent secretary-level meeting between India and Pakistan, India had once again reiterated the need for Pakistan to act against terror groups operating from its soil instead of being in “denial” about terrorism.

Pakistan has not given much credence to the Indian demand as is visible from the ongoing terrorist activity in the state. It, therefore, stands to reason that the support to terrorist activity in the state is not going to reduce any time soon and security forces will need to keep the pressure going. The notable point here is that the terror mongers across the border are not succeeding in their evil agenda.

A result oriented approach, therefore, would be not to look towards Pakistan to reduce its activities but to ensure that spread of terrorism is made so expensive in terms of finances, loss of life and credibility that it becomes an unviable option for Pakistan. It can be said that in this regard, India is moving in the right direction.

(Dr, Simrit Kahlon is an academician and a columnist)