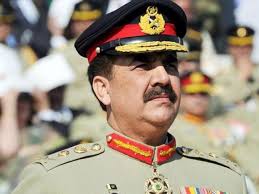 The sacking of six army personnel on charges of corruption by Pakistan Army Chief, General Raheel Sharif is eliciting all the right noises in the political, media and social circles of the country. Here is a man, his sycophants are saying, who has not stopped at even punishing his own to give a righteous message to the nation. He is being heralded as the ultimate nationalist!

A slightly deeper look into the whole incident, however, raises a relevant question. After being sacked or dismissed from service, why were these corrupt soldiers not arrested and subject to judicial scrutiny? The manner in which this incident has played out reinforces the perception that Pakistani soldiers get preferential treatment to the extent of being above the law of the country.

It is also quite evident that the high and mighty in Pakistan can maintain their position only by singing paeans of the all powerful General.

While this political posturing on corruption in underway, one is reminded of the book, Military Inc, written almost a decade back by the Pakistani author, Dr Ayesha Siddiqa. The brave lady risked her life to expose the Pakistan army as being more oriented to business than soldiering.

Dr, Siddiqa, laid the estimate of the Pakistan Army business enterprises at a whopping USD 10 Billion at a time when the entire country was in the fold of an economic crisis. She spoke of retired and serving officers running industrial conglomerates that manufacture almost everything from cement to cornflakes and even run, hold your breath, beauty parlours. She estimated that for this enterprise the Pakistan army has about 12 million acres of public land available.

The book was literally banned in Pakistan, but today her stand has been vindicated; officers of the Pakistan army are corrupt and self serving to a horrendous level as the latest purge has elicited.

One wonders as to why the officers caught in this tangle carried out such blatant acts of corruption when the system of governance in the country has been programmed to provide to them every conceivable luxury for life. The Lieutenant General sacked for corrupt practices comes across as a avaricious to an alarming degree.

The second and more likely option is that the Lieutenant General and his junior cronies, right down to a junior commission officer, were merely doing what everybody in the Pakistan Army does all the time but were unfortunate enough to become scapegoats in a larger game plan played out by their chief.

General Raheel Sharif now wishes to send out a message that would instantly convert him into a national icon and at the same time accrue some political benefits in undermining Prime Minister Nawaz Sharif, already under a scanner due to the revelations of the Panama papers.

General Raheel Sharif was not being diplomatic or patriotic when he said, in the aftermath of the sacking of the army personnel, that, “across the board accountability is necessary for the solidarity, integrity and prosperity of Pakistan.” He was simply referring to a need to bring about accountability in the political dispensation with special reference to the prime minister of the country.

It is quite amazing that an army general in a democracy can get away with an explosive statement of this nature but then, this is Pakistan for you!!

The generals and all others who have been sacked were serving on deputation in the Frontier Corps in Baluchistan, an auxiliary force responsible for maintaining law and order in the trouble torn province.

This sacking reinforces the common perception that Baluchistan is reeling under a corrupt administration. It is said that from 2008 to 2015 Baluchistan has received as much as Pakistan Rupees 1200 Billion as aid from the federal government. Add to this the massive investment that China is making in the region for the China Pakistan Economic Corridor (CPEC) and in the ambitious Gawadar port that has been under construction for many years now and we are looking at astronomical amounts of money flowing in the region.

The arrests would leave no doubt in anybody’s mind as to where the money is going, considering that the people continue to be in dire straits, leading a life akin to the medieval ages.

The arrests also leave no doubt in anybody’s mind as to why the people are rising against the authority of the state. They have no option but to fight for the rights that are being denied to them most blatantly.

With what face does Pakistan blame India for stoking fires of insurgency in the restive province when officers of the Pakistan Army, the holy cow of the nation, are involved in siphoning billions meant for the development of the deprived region? Is there any need to instigate such people who are already at the very limit of their patience due to continuous and blatant suppression?

The political dispensation in Pakistan should realise that blaming India or any other factor for the insurgency in Baluchistan serves no purpose whatsoever. The conflict can never be brought to an end as long as there are no meaningful actions against corruption in the province.

Now that the theatrics are over and done with, General Raheel Sharif needs to walk the talk. A good beginning would be to break up the Military Inc and get down to some serious soldiering. Any soldier would vouch for the need of better training and discipline in the Pakistan army to meet the many internal challenges that the country is facing.. The army has never allowed the police and paramilitary forces of the country to develop, so it is now morally obliged to deal with the fragile internal security situation.

It is also absolutely necessary to stop exploitation of the North West Frontier Province, Gilgit-Baltistan, Pakistan Occupied Kashmir and Baluchistan by mercenary elements in the Frontier Corps and the Rangers. The brutality and suppression simply has to stop.