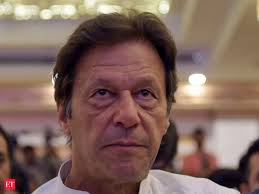 Imran Khan, the Prime Minister of Pakistan,  seems to have taken over the task of spreading despicable anti-India propaganda that has, for decades earlier, been the responsibility of the Pakistan Army’s  Inter Services Intelligence (ISI) and the Inter Service Public Relations (ISPR). He has uploaded a fake video on his Twitter handle accusing the Indian government of deliberately targeting the Muslim of the country “as the world battles Corona Virus.” The video is of an situation of violence between Government forces and some locals in Bangladesh a few years back. This obnoxious propaganda by the prime minister himself has elicited a prompt and very apt response for the Indian Ministry of External Affair (MEA). “The bizarre comments by the Pakistani leadership are an attempt to shift focus from the abysmal handling of their internal affairs,” stated Indian MEA spokesperson Anurag Srivastava.

The situation of Corona Virus combined with the precarious economic condition and political instability has put Pakistan into an existential crisis. The national figures of the virus situation speak of a nationwide tally of 8,418 cases. Of these,, 176 are reported dead and 1970 recovered. These numbers are grossly underreported due to the iron grip that the Pakistan Army has on the media.

A better insight into the actual situation comes from an article by Tufail Ahmed, carried by the Pakistani Newspaper, Express Tribune, on 17 April and titled, “3,265 bodies brought to 30 graveyards of Karachi in 49 days, data reveals.”

as the source of the worrisome body count of 3,265 dead given in the headline of the story itself, the writer has quoted, “official statistics from the city’s top administrative body,” later identified as the Karachi Metropolitan Corporation’s (KMC).  The 49 day time period is from  February 20 and April 9 when the Virus situation had erupted in Pakistan. In the succeeding weeks, the numbers would have increased manifold. The author has gone further to give a cemetery wise data of the Central, West, East and Malir Districts of the city. Earlier, a number of media reports had mentioned a sudden spike in deaths in different Hospitals in Karachi.

The authorities have, as expected, stayed tight lipped. There are no authenticated reports available that could link the cause of death to the Corona Virus since no Hospital has kept any records of tests conducted to ascertain cause of death. This situation is against all medical conventions. Even proper Post Mortems have not been conducted. Quite obviously, this is a blatant attempt to hide the actual figures related to death due to Corona Virus which is very high in numbers.

More critical is the fact that the Pakistan Army, that was forced to come out and enforce the shut down has suffered widespread infection of the Virus. There are reports of many Army specific quarantine and isolation centers operating in places like Pakistan Occupied Kashmir (POK), Gilgit-Baltistan and Balochistan far away from the media glare. The cases have been divided into three categories, positive cases, Category-A cases and Category-B cases. The overall numbers are running in thousands.

A very serious allegation on Pakistan’s role in the spread of the Virus in Islamic nations worldwide has been made by a reputed Pakistani journalist, Kunwar Khuldune Shahid,  who is a correspondent with the Diplomat and other prestigious publications.

In his article titled. “How Pakistan became a Coronavirus super-spreader to the entire Muslim world” carried by the news website Haaretz, the introductory paragraphs state, ” On Sunday, the Gaza strip reported its first two cases of Corona Virus. The two Palestinian men had recently returned from Pakistan. They were among the 250,000 people that gathered in Lahore two weeks ago, to participate in the Tableeghi Ijtema…an Islamic event organised by the local Tableeghi Jamaat.” In addition to Palestine, those from Kyrgyzstan who attended the meeting have also tested positive,

According to the author, by the end of February Pakistan had already reported its first Coronavirus cases. Yet, the Government dilly-dallied in cancellation of the event to be held from March 11 to March 15. On March 12, the organisers were asked to disband the congregation. By then, around 250,000 people from all Islamic countries had already assembled, apart from Pakistanis in large numbers. These participants of the of the event  have become “carriers” of the Virus and are instrumental for a burgeoning catastrophe in the Islamic world.

The Jamaat cited “rainy weather” and not the virus as the reason for the closure which compelled Khuldune Shahid to state in his article, “The Tableeghi Jamaat’s reluctance to cite an infectious virus as cause for the disbandment is rooted in its regressive ideology, whose exponents have ranged from militant jihadists to radical preachers….”

The Government of Pakistan continues to be wary of the Mullahs and is not taking firm steps to stop Mosque congregations even though countries like Saudi Arabia, Iran, Turkey that hold many Muslim holy places have already gone into total shutdown of religious institutions. Imran is following this path because of his Governments weak response to the crisis, it has no money;,  the aid that is to come from outside will not be optimised since it does h not have the requisite infrastructure in place to use it effectively. The government’s priority is to ensure the Islamic clerics that their money making shops will remain open. By doing so, it is looking for support from the clerics once the Corona Balloon goes up. The deep state is attempting to put similar regressive thought in the minds of Indian Muslims. That is the intention behind the twitter post by the puppet Prime Minister Imran Khan. Instead of taking some affirmative action, the prime minister is looking out to stall negative media that, he feels, will damage irretrievably his already tottering political career. He is, therefore, turning media attention towards India.

While the prime minister jumps from one mistake to another, demonstrating total ineptness to deal with the situation Pakistan remains headed towards a crisis of unimaginable proportions. For India, the situation in Pakistan should serve as a demonstration of what not to do under the prevailing circumstances.