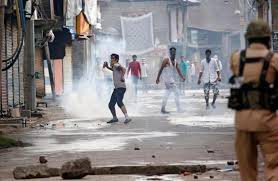 Human Rights violations in Kashmir were the outcome of the advent of terrorism which led to the establishment of a security dragnet to challenge the same. Undoubtedly, the people have suffered immensely in the sad situation thus evolved.  Losing the right to walk on streets without being asked to prove innocence and identity is the biggest violation of human rights. Those who have not experienced it cannot imagine what it is to be constantly watched, suspected or at times even questioned for ‘just being a Kashmiri and being there.’ Vehicle checks make one feel helpless and violated. There is an acute loss of dignity when a person is called upon to stand outside his or her house while a search operation by the security forces is underway.

The All Party Hurriyat Conference (APHC) called for a peaceful protest on World Human Rights day to draw attention of the international community towards HR violations by security forces in Kashmir.

The initiative has its merits, but sadly, due to the subjective stance of the conglomerate on the issue of human rights, the protest ended up being what can be best described by Shakespeare’s famous lines, “full of sound and fury but signifying nothing.”

That something of this nature happened should not come as a surprise for the APHC. Using HR violations as a propaganda tool, as it does, is something that no nation accepts or a responsible political organisation resorts to.

The APHC sees a HR violation when the security forces fire at a mob trying to help an armed militant to escape and kills a youth, but it does not consider the lynching of a Kashmiri police officer by a mob just outside a mosque as a HR violation! When the APHC is openly following double standards on the issue of HR violations then how can it expect the world community to take note of its HR Day protest?

The issue of HR violations by militants has plagued Kashmir ever since militancy started. Even dedicated and highly respected personalities like the devout Mirwaiz Mohammad Farook, separatist leader Abdul Gani Lone and numerous others were not spared by the militants. They were brutally murdered despite being unconditionally committed to the cause of self determination. Surprisingly, the APHC has never criticised the militants for these cold blooded and senseless murders; they have, instead, alleged that these luminaries were killed by Indian security forces and intelligence agencies. If the APHC’s aim was to malign the security forces and the Government of India, then its plan misfired very badly as its allegations were never accepted by the people of Kashmir or the international community.

The common threat binding all the leaders who were murdered by militants was their unwillingness to become puppets of Pakistan. The unnatural eagerness shown by the APHC in giving a clean chit to militants involved in such killings fanned rumours of the same having been planned by Islamabad. The objective of the planned killing was to clear the way for certain separatist leaders with unwavering pro- Pakistan leanings.

This rumour gained greater acceptance when these separatist leaders changed the original aim of the struggle in Kashmir from Azadi (Independence), as envisioned earlier, to Kashmir becoming a part of Pakistan!

Islamabad has also been making a great hue and cry about HR violations in Kashmir. Yet, just like the remonstrations of the APHC, its statements have not made any mentionable impression on the international community. The reason for this being that, like the separatists, Islamabad also sees the situation in Kashmir through prejudice tinted glasses.

It is the ordinary Kashmiri who is suffering the most as he is sandwiched between the security forces, the militants and the sponsored disruptive activities of the separatists. The sad part is that, unlike the security forces who are answerable for their actions, militants are accountable to no one and are law unto themselves. Separatists, on their part,  take full advantage of the democratic credentials of the country to carry forward their agendas unhindered.

The APHC puts each and every action of security forces through minute scrutiny while turning a blind eye to the misdeeds committed by militants which emboldens the latter. It is very prompt in ordering shutdowns to protest against the killing of militants in encounters but it becomes a mute spectator when innocent civilians are killed or injured by militants.

The APHC wants the world to believe that militants are noble souls who are putting their lives at stake for the sake of the oppressed Kashmiri’s. However, the gruesome manner in which militants have been murdering civilians on mere suspicion of being informers and endangering lives of civilians by using cover of crowds to attack security forces belies this claim. The APHC’s repeated attempts to bail out militants harming innocent civilians by shifting blame on the security forces has been done so often and in such a shoddy manner that now no one takes such accusations seriously.

The complete lack of concern that the APHC exhibits whenever militants commit acts of violence against civilians is what raises serious doubts regarding the sincerity of this separatist amalgam towards the people of Kashmir.

If the APHC wants the world to believe and take notice of what it says on the issue of HR violations in Kashmir then holding a protest on HR Day is of no use. Instead, it needs to take an objective view of this problem and have the moral courage to condemn all such acts with equal vigour, irrespective of who the culprit may be!

The amalgam needs to work towards building on its credibility if it wishes to take on the mantle of being the “true representatives” of the people of Kashmir that it aspires for. The separatists need to look at reality in the face and introspect upon their own role in the spread of HR violations in Jammu and Kashmir, their approach has to be holistic and unbiased if it is to pass the test of trustworthiness.