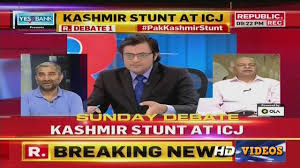 The situation in Kashmir has been centre stage in national affairs for quite some time now. Prime time debates on television and front pages of newspapers focus on it on a daily basis.

Is Kashmir slipping out of Indian control? Is the government in a state of paralyses and non-functional? Are the security forces losing control over the law and order situation? These and other questions on the same lines are causing considerable anxiety across the nation!

While it cannot be denied that the situation in Kashmir is posing a grave challenge to the government as well as the security forces, there is no cause for the kind of panic that is being generated, mostly by the media.

Yes!! There are a few serious incidents taking place but these cannot be used as a benchmark to describe the state of affairs in the complete Valley, not to talk of the other areas of Jammu and Ladakh that are very much a part of the state and very peaceful.

Sweeping statements are being made by a host of writers and analysts that give a blinkered viewpoint. Most of these analysts are not from the region and many may not have visited it for a long time, if ever. They utter inanities and generalities with a lot of confidence, regardless of the negative effect that the same has on the psyche of the people within Kashmir and the nation as a whole.

Take for example the issue of locals taking to militancy. The volumes written and spoken on the subject create an impression that all young boys in the Kashmir Valley, especially those who are highly educated graduates and post-graduates, are roaming around with an AK-47 in his hands.

This is a fallacy and there are statistics to prove the same. The total number of terrorists (wrongly termed as militants) operating in Kashmir Valley is no more than 200. Of these, forty percent are of foreign origin which leaves about 100 to 140 local terrorists; of these, a predominant number have no more than secondary level education and many are totally illiterate. Most have not stepped out of the Kashmir Valley. There are, of course, some who are graduates and post-graduates but their number is miniscule.

The brutal killing of Lieutenant Umar Fayaz is indeed horrific, condemnable and a huge tragedy. Equally tragic is the manner in which it has been “objectified.” A host of people have discussed his death on television with breathless anchors egging them on. Political leaders, not known to lose any opportunity to come in front of a television camera, have been falling over each other to give ineffectual and parroted bytes.

This happens every time there is a terror attack in the region or when some soldiers lose their lives. By doing so the analysts, politicians and general discussants, with the media, divest the fallen soldiers of their dignity; they also wrest from the family the right to grieve in private. The sensationalist coverage further creates an impression that the terrorists can kill our soldiers at will and that the region is in flames, slipping out of hand.

The media coverage, in no way eases the situation in the state or provides solace to the bereaved family. It, in fact, plays into the hands of the terrorists and their masters sitting across the border who project the same as an indication of the desperation of the Indian state.

As the media moves from one sensationalist incident to the other, it fails to address core issues. When, for instance, did the media last highlight the shameless and blatant use of religious places by the terrorists to further their sinful activities? Is it not the responsibility of the media to expose the role being played by the separatists and their paid Maulvis (religious teachers) in facilitating such sacrilegious acts?

The Indian Army feels, and rightly so, that the brutal killing of young Lieutenant Umar Fayaz can prove to be a catalyst for a people led movement in Kashmir to eliminate the immoral and vicious wave of terror and divisiveness. This is where the role of the media should come in and take this message to every nook and corner of Kashmir

Sadly, such stories would require time, effort and expenditure to pursue and produce and these three elements are in short supply with all media in India, be it the print, digital or the electronic domain.

Passing “information” to the people and steering their perception in the positive manner, especially that of the impressionable youth, is not the role of the media alone. The political parties also have this mandate and a massive cadre to implement the same. If this cadre is directed by its leadership towards advocacy of nationalism while exposing the ugly face of terrorism and separatism, it can do wonders.

Unfortunately, the policy of all political parties is guided by petty political rivalry. In the attempt to denigrate the opposing parties these establishments cause immense damage to the national narrative.

To indulge in such blame games is a part of politics in a democracy, but definitely not when national integrity is being threatened as is the case cheap prom dresses in Kashmir.  The ideal would be to first fight the enemy of the nation and then get to each other’s throats for a wholesome political face-off.

What is required in Kashmir at the moment is an understanding of the nuances of “conflict communication,” a phrase used by late Shri I. Ramamohan Rao, an iconic communicator who recently passed away. It needs to be based more on “information” than on sensationalism.

One is not advocating a blanket ban on analysis or on suppressing of hard news but definitely the element of “breathtaking thrill” needs to be curbed.  The objective should be to leverage information towards challenging the fault lines and finding solutions to the problem and not towards playing out a deathly narrative.

(Jaibans Singh is a reputed expert on Jammu and Kashmir affairs)