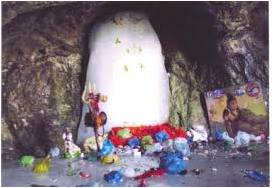 The pilgrimage to the holy cave of Amarnath in the Kashmir valley, popularly termed as the Amarnath Yatra, is scheduled to commence on June, 28 and will conclude, in accordance with tradition, on the day of Raksha Bandhan, August, 21, 2013. The holy cave of Shri Amarnath is located at the head of the Sind Valley in Kashmir, flanked on the north by the great Himalayan range and in the south by the Sasakat mountain range. It is located beside a small tributary of the Sind River called Amaravati. It is believed that the Lord Shiva narrated the Amar Katha to Godess Parvati in this cave; it has been a place of pilgrimage for since many centuries.

Despite the turmoil of militancy in Jammu and Kashmir, the importance of the Amarnath Yatra never diluted. Lakhs of pilgrims from all parts of the country visit the shrine every year regardless of the security threat. Even during the peak of terrorism, the number of pilgrims was always more than what the Government could allow due to security reasons and time constraints; it continues to be so

The local Muslim population has never heeded the diktats of terrorists to boycott the Yatra and it participates in the pilgrimage with fervour equal to that of the Hindus. It is unmoved in its faith and devotion to the shrine. Hotels, shops, pack ponies, porters and all other related services gear up to welcome the pilgrims. A festive air is visible in the area. The guides and porters of both communities are equally conversant with the legend and mythology and are more than willing to narrate the same to anybody ready to listen to them. Anybody requiring assistance finds hundreds of hands extended towards him, without knowing whether the hand belongs to a Hindu or a Muslim.

Notwithstanding the religious sentiments of the people, politicians of all shades and hues do not relent from politicising the Yatra as the when an opportunity presents itself. Year after year, the conduct of the Yatra is subject to avoidable political rhetoric even as the people remain steadfast in their belief in the holy shrine. This year, the political posturing has taken the form of an open debate on the degree of security threat to the Yatra.

On June, 18, Lieutenant General KT Parnaik, Army Commander, Northern Command said that intelligence inputs had suggested terrorist intention to disrupt the Yatra. He further gave an assurance that adequate security arrangements had been put in place to counter the threat. Along with the multi-layered security arrangements, Army would be using Unmanned Aerial Vehicles for surveillance of the Yatra route and the cave shrine, the security operation has been code named Operation Shiva. Besides the army, 50 companies of Paramilitary forces and adequate police strength would be deployed for security of the Yatra. On June, 19, Union Home Minister Sushil Kumar Shinde while reiterating the possibility of a security threat to the Yatra said that the centre would be sending additional forces to ensure safety and security of all pilgrims visiting the cave shrine.

The aforementioned statements elicited a strong response from the separatists. The first to come on the air was, as usual, Syed Ali Shah Geelani; he asserted that there was “no threat” to the Yatra from the people or the terrorists. “Operation Shiva is a well planed and calculated move aimed at maligning and discrediting the ongoing freedom struggle”, he said with great gusto. Close on his heels Mirwaiz Umar Farooq stated that “Claims of threat to Yatra are nothing but a State-backed propaganda to defame the ongoing freedom struggle”. One would like to ask these persons as to how they can speak of terrorist intentions with such surety? Would it be wrong to deduce from their statements that terrorists in the valley strike in accordance with their orders?

What came as a surprise was that Chief Minister Omar Abdullah dismissed reports of a specific threat to the Yatra, terming the assertions from MHA and Army on the issue as “gross exaggeration.”

That the separatists would react the way they did was expected since any talk of a terror/security threat in the valley goes against the grain of their campaign to malign the security forces and force a reduction in the security umbrella so that terrorism can gain firm footing all over again. But the chief minister of the state openly negating well considered statements by senior representatives of the central government is unexpected and unacceptable. Evidently his preoccupation with the partial revocation of the armed forces special powers act is clouding his ability to govern the sensitive state in the manner that he should be doing. The terrorists responded by killing two policemen and injuring a girl in the heart of Srinagar in broad daylight the very next day on June, 22. The chief minister may also be aware that the ominous signature of Islamic fundamentalist militant forces has been witnessed in Gilgit-Baltistan across the line of control with the gruesome murder of ten international tourists.

The statements by the Army Commander and the Home Minister were quantifying the obvious, there has always been a threat to the Yatra and a collective security umbrella by the army, the Police and the Para-military forces has always been in place to counter the same. By speaking on the issue the senior officials were warning the pilgrims, the administration and the state government to maintain the highest level of vigilance and assist in the management of security to ensure that no untoward incident is allowed to happen.

Be that as it may, it is best at this stage to dismiss any pessimism that may have come by due to the negative statements and obnoxious politics being played by a few and concentrate on the smooth conduct of the Yatra. Har Har Mahadev.