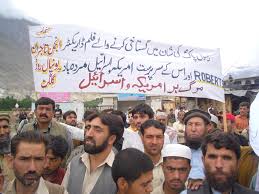 The Imran Khan led Government of Pakistan is exhibiting great determination towards integrating Gilgit-Baltistan as the fifth province of the nation and, in this evil design, it has the complete support of the pliant Judiciary. It may be recalled that PML (N) Government led by Prime Minister Shahid Khaqan Abbasi had promulgated the Gilgit-Baltistan Reforms Order, 2018. It had gumption of terming the order as an improved version of the Gilgit-Baltistan Empowerment and Self Governance Order of 2009 that was introduced by the Pakistan People’s Party (PPP) Government. Legal experts, however, denounced the same as a blatant attempt to seize power of the Gilgit-Baltistan Council and entrust the Prime Minister (and through him the federal government) with undisputable authority.

The Imran Khan led government is now attempting to strength this evil design. To cover up the falsity and duplicity the prime minister set up a high-level reforms committee to “look into the constitutional, administrative and governance reforms for Gilgit-Baltistan.” The committee carried forward the sham by recommending a provisional provincial status for the region with representation in the National Assembly and Senate to the tune of three seats each in both houses of parliament.

Since 2009, under pressure from China to legitimise control over Gilgit-Baltistan in order to safeguard the interests of the China Pakistan Economic Corridor (CPEC), Pakistan has thrown caution to the winds and has been working towards amalgamation of the region as its integral Province. The first salvo was fired in the form of the Gilgit-Baltistan Empowerment and Self Governance Order of 2009, which was strongly opposed by the people. Then came the second salvo in the form of the above mentioned Gilgit-Baltistan Reforms Order, 2018 by Prime Minister Shahid Khaqan Abbasi just before remitting office and now the actions by Imran Khan to strengthen the control by application of the order on ground; he has effectively taken off from where Nawaz Sharif left.

The machinations clearly indicate that while the political parties in Pakistan remain at each other’s throats in the most debased manner, they remain on the same page so far as keeping Gilgit-Baltistan firmly under control of the federal government is concerned. This is because of the commonality of interest in bleeding the region of its natural resources, which is being done by all political leaders, army officers and big businessmen of the country. This is the worst form of colonisation ever witnessed.

The Supreme Court of Pakistan has also jumped into the fray. On the appeal of a local MLA, it has quashed the Gilgit-Baltistan Reforms Order, 2018 and restored the Gilgit-Baltistan Empowerment and Self Governance Order, 2009. By doing so, it has established the legal validity of its jurisdiction over Gilgit-Baltistan. Now the situation is that while the Courts of Gilgit-Baltistan will not have any jurisdiction to deal with issues within Pakistan, the people of the region will be able to challenge the decision of these very Courts in the Supreme Court of Pakistan. In other words the Supreme Court has now taken overreaching powers by what it has termed as the “interest of the people.”  As a balm, it has passed directions that people of the region should be given fundamental human rights as provided by the proposed Constitutional Order. It has also directed that the constitutional status of Gilgit-Baltistan be determined through a referendum within 14 days, which would be a miniature version of what Pakistan has been seeking all this while and will be used to leverage its hold on the region. It is this direction of the court that Imran Khan seeks to exploit while taking the required steps to completely gobble up the region. All of this reeks of partisan interests involving all segments of the government machinery.

India has lodged a strong protest to Pakistan with regard to the series of interferences that are being engineered by the government and the judiciary to change the character of Gilgit-Baltistan and impair its disputed status. “The entire state of Jammu and Kashmir has been, is and shall remain an integral part of India,” reiterated India rather strongly to the High Commissioner of Pakistan to India. “Pakistan Government or judiciary has no locus standi on territories illegally and forcibly occupied by it,” the statement further read.

The hapless people really do not know which way to turn. They protest as much as they can and have created an umbrella organisation, the Awami Action Committee as a united front. The protests, witness complete shutdowns of markets and business centres in major towns. There is also thin attendance in private and government offices, and educational institutions etc. Their Diaspora attempts to raise their problems in international circles, but the support falls short of exerting a direct pressure on Pakistan to mend its ways. The leaders from Gilgit-Baltistan are now seeking to integrate their struggle with that of the people of Pakistan Occupied Kashmir (POK) to infuse more energy

The high handed attitude adopted by the Pakistani authorities simply reinforces the perception that they are interested only in exploiting the rich natural resources of the region and looting the people in every conceivable manner without giving even a passing thought to their aspirations. Fed up with this blatant exploitation, the people are now exhibiting widespread resentment without fear of the inevitable reprisals that come in the form of illegal detentions and strange disappearances of those who protest.

The world in general and India in particular need to wake up to the massive atrocities and Human Rights violations that the people of the region are being subjected to for no fault of theirs. The world needs to pressurise Pakistan towards revisiting its mistreatment of the beleaguered region. Without strong measures like sanctions or direct foreign intervention the Pakistani establishment is not likely to relent from its evil designs. The time to act is now or it will be too late and the world will lose out on an entire civilization.

(Mehtab Karan is a US based engineer and Geo-political analyst)