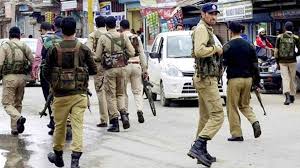 Keeping families out of a personal fights and vendettas is a code of conduct that has been followed universally since times immemorial. Soldiers in opposing armies, mafia, warlords, insurgents, and revolutionaries follow this code.

Against this backdrop, the recent reports of terrorists kidnapping families of Police personnel in Kashmir are worrisome. Reports suggest that all those abducted have been released, this comes as a relief but the act itself being conceivable is a matter of concern.

It may be recalled that earlier in March 2017, terrorists had warned a police officer’s family to ask him to quit or face the consequences. At that stage Director General JK Police, SP Vaid, had been forthright in issuing a warning, “You have families too, take this as a warning,” he said.” “My take is, we should not bring the families into this conflict whether those of terrorists or policemen. Families have nothing to do with this. We must keep them away from this,” said Vaid at that stage. After that, the intimidation of families of policemen by terrorists stopped completely. It has now resurfaced at a much larger scale.

The trigger this time is the arrest of Syed Shakeel Ahmad, son of Syed Sallahuddin by the National Investigation Agency (NIA). Syed Sallahuddin has perfected the art of getting Kashmiri’s killed while he himself enjoys a secure and luxurious life in Pakistan Occupied Kashmir (POK). On paper Sallahuddin is chief of the terrorist organisation, Hizbul Mujahedeen, and also Chairman of the United Jihad Council (UJC). In actuality, he works as a recruiter for Pakistan’s Inter Services Intelligence (ISI). It is through him that innocent youth of the valley are indoctrinated to follow the path of terrorism; all sorts of methods ranging from drug addiction, intimidation of families, psychological pressure are put to use to further this recruitment. The few unfortunates who fall into his trap are given a Rifle (mostly AK-47) a few rounds of ammunition and sent into the field. They have no training or support base to sustain them and, as a result, are killed within days of posting their profiles on Face Book.

The same Syed Sallahuddin who has the blood of so many innocent Kashmiri’s on his hands has gone on a rampage when his own son has been arrested – not even injured, let alone killed. Now, because of his personal agenda, he has triggered a chain reaction of reprisals between the police and the misguided youth who pass off as trained cadre of his terror organisation. Those who have been indoctrinated by him are so stupid that they do not realise the consequences of what they are doing! If they had any brains they would have paused to reflect as to why their seniors in the cult of terrorism never did anything like this. Not only are they out to ruin themselves, they are now putting the lives of their entire families in jeopardy. They will go down as cowards who took the spineless path of using innocent civilians as shields to further their agenda, something that a true revolutionary or an insurgent would b never do!

Apart from Shakeel Ahmed, Syed Sallahuddin has four more sons and two daughters holding cushy jobs mostly in the state government in Kashmir. His son Javed Yusuf works as a computer operator in the education department, Shahid Yusuf is employed in the agriculture department, Wahid Yusuf is a government employed doctor, Majid Yusuf is an engineering graduate probably working in the private sector in Kashmir. Both his daughters Naseema and Akhtara are government employed teachers.

Syed Shakeel Ahmed would have been detained by the NIA only on the basis of substantial proof of his involvement in anti-national activities; if found guilty he will have recourse to a fair trial in accordance with the law of the land. The terrorists should feel happy that they have the son of their leader in their midst suffering as they are. Why are they bending backwards and putting the lives of their families in jeopardy to save him? They can intensify operations against the security forces if they have the strength and the courage to do so, why stoop to such a low level of targeting innocent civilians?

Sadly, none from the separatist Hurriyat conglomerate, who leave no opportunity to present themselves as the true representatives of the Kashmiri people, have out to condemn the dastardly terrorist act against the people and the culture of Jammu and Kashmir. This silence speaks volumes about the road that the Hurriyat is following. Their self serving agenda stands totally exposed.

One hopes that this order given by Syed Sallahuddin will expose him for the coward that he is and people wills see through his evil machinations, as also the duplicity of the separatists and cease supporting them. The tragedy of Kashmiri killing Kashmiri is not leading anywhere. It is only the people of Kashmir who are suffering nobody else.

It is necessary for the common Kashmiri to comprehend that danger being posed by a few ill informed upstarts to his civilisation, his culture, his religion and his very concept of life. The battle now is no longer about aligning with Pakistan or with India or remaining independent; it has a much more dangerous existential dimension which needs to be addressed with utmost seriousness.

In the meantime, all talk of outright appeasement needs to be put on the backburner. The concept of healing wounds is okay only to the extent that it does not compromise the law and order situation or lowers the morale of those who maintain security at great cost to their lives.

(Jaibans Singh is a reputed analyst, columnist, author and speaker)