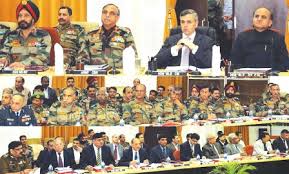 It is very heartening to see the Indian Army and the government of Jammu and Kashmir holding a Civil-Military Liaison Conference (CMLC) at the highest level in a cordial and friendly environment. The matter gains significance due to the fact that the last such conference was held four years back in 2009. The Army Commander, Lieutenant General Sanjiv Chachra, most courteously covered up the time gap by saying that while a CMLC has not been held for four years the state government has always been responsive to the requirements of the armed forces. It would be best to accept the courteousness of the general officer and not press the issue while fervently hoping that continuity will be maintained in the future. It is notable that the heightened interaction on security related issues between the government and the army due to the terrorism triggered turmoil leaves less time for discussing administrative aspects that are equally important.

It was heartening to hear the good words that Chief Minister Omar Abdullah had to say for the armed forces. While praising the forces he touched upon the good work that they are doing in protecting the country and safeguarding the people from external and internal threats, as also rendering invaluable service during natural calamities. His words were gracious and spoken like a statesman. His emphasis on the need to strengthen the civil-military liaison to address the issues concerning the two organisations speedily and amicably should be taken with utmost seriousness by his government officials. The declaration enhancing financial assistance to World War II veterans and widows from Rs 1500/- per month to Rs 3000/- per month is cosmetic at best since there would hardly be any beneficiary alive but when seen as a gesture it has value – their contribution stands acknowledged. It would be a good idea to rally such brave-hearts or their widows who are alive. A function of this nature would provide motivation to the younger generation.

The statement by the army commander about the army meeting its logistic requirements of food and supplies, construction material etc through local resources indicates the deep understanding about the situation that the army has. This is the time when generation of employment and economic opportunity is most critical for turning around the state of affairs in the region and by taking measures to boost the economy the army is showing utmost sensitivity to this crucial aspect. As it is, the army is a major source of employment through its hiring of porters, ponies, civil transport etc and recruitment in Territorial Army (Home and Hearth) battalions and in the regular forces. Youths of the state are attracted in large numbers towards all avenues of hiring and recruitment provided by the army. Add to this the engagement of the locals in commercial activity and we have in place a very positive contribution towards stability and development of the state.

The issue of land holding came up for discussion as was expected. Certain divisive forces are trying to bring a wedge between the army and the government by raising issues regarding the firing ranges in the state, especially Tosa Maidan in the Kashmir valley. The army commander, Lt General Sanjiv Chachra set the pace of the discussion by acknowledging the need to return to the State land that is not required by the army. He clarified that a comprehensive audit of the Army’s land holdings and requirement in the state is being carried out so that only essentially required land is retained. The chief minister, on his part, refused to be drawn into the Tosa Maidan controversy and opted for a high-level panel headed by the chief secretary to suggest viable solutions to the issue. This is a step in the right direction because a via media has to be found between the army’s training requirements and the need to meet so-called local aspirations. The panel thus constituted would do well to involve the locals in the decision making process, it may so emerge that they have no problems with the presence of the army which is a lucrative source of income generation and that the whole matter is being blown out of proportion by non stake holders who have a political interest.

The army has also attempted to downplay the efforts that it is making towards the development of the state through its welfare measures like Operation Sadbhavna. Now it has clarified that its activities would be more in the vicinity of its troop deployment. This is because the army understands that the state government is now capable of taking on major development issues and the requirement now is to provide full support to government initiatives especially in the higher reaches and inaccessible areas where its troop deployment can play an important role. By taking this approach the army has yet again confirmed its deep understanding of the affairs of the region.

Inimical forces from across the border and their stooges within the state are on a look out to create a wedge and exploit any differences that crop up between the army and the state administration. The CMLC, though delayed, has come by at a very opportune time; it has aptly demonstrated that there may be certain differences in perception but beyond that the army and the state administration are united in their effort to meet all challenges that come up in ensuring peace and prosperity in the state of Jammu and Kashmir. It is no wonder that certain prominent lobbies in the state have maintained a studied silence so far as this particular conference is concerned, they must be busy taking a measure of their political losses due to this positive turn of events. Now when desperate attempts are emanating from Pakistan to enhance the terrorism threshold in the state it is all the more important for the army and the state administration to maintain strong bonds of unity. Such interaction should continue with due regularity in future also.