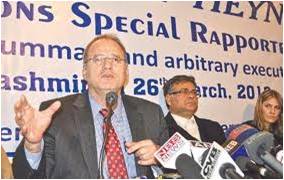 The media environment is abuzz with the visit of Mr. Christof Heyns, the UN’s Special Rapporteur on extrajudicial, summary or arbitrary executions to India. Heyns’ visit is the first mission to India by an expert mandated by the UN Human Rights Council (UNHRC) to monitor and report on extrajudicial, summary or arbitrary executions. He visited Gujarat, Kerala, Jammu and Kashmir, Assam and West Bengal and met secretaries of various ministries, police officers, human rights activists and other officials in these states, over only 12 days.

A special rapporteur is a title given to individuals working on behalf of various regional and international organizations on mandates to investigate, monitor and recommend solutions for specified issues. There are rapporteurs of the United Nations, the African Union, the Organisations of American States and such bodies. This particular body has been mandated by the United Nations to examine situations of extrajudicial, summary or arbitrary executions in all circumstances and for whatever reason and submit findings on an annual basis, together with conclusions and recommendations, to the UNHRC and the General Assembly. Mr. Christof Heyns, who belongs to South Africa, has held this post since August, 01, 2010. He is likely to submit this report to the UNHRC only in 2013.

Notwithstanding the fact that there is still a year to go before the report would be tabled, the special rapporteur did not hesitate from meeting the media and giving a brief on his observations. He told reporters in New Delhi that he considered the Armed Forces (Special Powers) Act to be a “symbol of excessive state power” that “has no role to play in a democracy”. “During my visit to Kashmir, AFSPA was described to me as ‘hated’ and ‘draconian’. It clearly violates International Law. A number of UN treaty bodies have pronounced it to be in violation of International Law as well,” said Heyns. It is also significant that He has condemned violence perpetrated by what he terms as “rebels” in India thus exhibiting his complete ignorance about the fact that India is facing a challenge of foreign sponsored terrorism and not a rebellion.

What is quite incredulous in such fact finding missions is that some person quite divorced from the history and culture of a particular land and equally ignorant about its state of affairs has the gumption to embark on a whirlwind tour, meet a few people and then wax eloquent on extremely complex issues with resounding authority. Would people like Heyns be allowed to speak on the draconian nature of the US PATRIOT Act which gives sweeping powers to the security establishment, be it the Armed Forces of the country, the Homeland security or the Police; powers like confiscation of property, authority to intercept communication and delay execution of a warrant amongst others? Today in the US, if the State gets an inkling of a person being involved in terrorism, it can act against the person without recourse to the normal process of law as applied in a developed free society. Security laws passed by other European countries like the Britain’s “Anti-terrorism, Crime and Security Act 2001”, have equally stringent provision much more inhibiting and draconian than the AFSPA, yet, not a word is being said about the same.

Heyns heard the versions of some people who professed to being victims of excess committed by security forces, but he did not meet even one of the thousands of families who have lost their near and dear ones to terrorist atrocity or innocent young girls who have been blatantly victimised by terrorist lust. He seems to have completely ignored the vitiated atmosphere prevalent in India’s neighbourhood where rule of the gun, mostly perpetrated by the State itself, is rampant. Pakistan is literally teeming with mercenaries and militants from across the world poised to enter our sacred soil and blemish it in the name of Jihad. Amidst all this he expects India to stand aside so as to establish its “commitment to human rights”. Heyns is right when he talks of unacceptable levels of deadly violence but he is totally ignorant about the source of this violence and the herculean efforts being me made by a committed security establishment to counter the same.

The Union Home Minister, P Chidambaram, has responded rather meekly to the uncalled for and unseemly comments made by the special rapporteur. He said that the rapporteur had made “some positive statements.’’ On the views of the rapporteur on AFSPA, Chidambaram took a circuitous route to state “Yes, we take note of the view but that’s not a novel view as there are a number of people who have expressed the same view and there are others who have a contrary view which is why the issue remains unresolved”. One wonders whether he was referring to his own cabinet colleague, the Union Defence Minister, when he spoke of the contrary view, a classic case of using a situation to play Intra-party politics.

It is time for India to realise that it no longer requires a mandate from organisations like the United Nations in the conduct of its internal affairs. If a small country like Sri Lanka can ignore this organisation, one wonders as to why India needs to engage with it, especially so, with respect to sensitive security issues. What need do we have, as a strong emerging world power, to exhibit willingness to host such missions. No outsider can ever understand the problems of a country of the size and complexity of India let alone give possible solutions. There was no reason to invite Christof Heyns in the first place; now that a mistake has been committed, the best way out is to learn from it and move on.