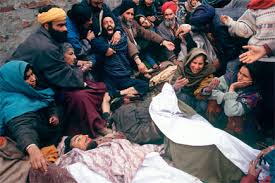 Sixteen years back on the fateful evening of March, 20, 2000, the Kashmir Valley witnessed an incident of extreme brutality and barbarity, which sent shock waves across the region.

Terrorists dressed in military fatigues and masquerading as soldiers of the Indian Army entered Village Chittisinghpura, District Anantnag, Kashmir and shot to death 36 innocent civilians belonging to the Sikh community.

Village Chittisinghpura is the biggest village of the Sikh community in the Kashmir Valley. It is located about 8 kms from Mattan where Guru Nanak, the first Guru of the Sikhs paid a visit. The place, as such, holds great sanctity for the Sikh community that has been residing over there for ages.

The massacre was meant to convey a diabolic message to Bill Clinton, then President of the United States, who was scheduled to visit India the very next day. It was also the first time that terrorists had targeted the Sikh community in the Kashmir valley.

Nanak Singh, the sole survivor of the carnage, who saved himself by feigning to be dead despite having received a gunshot wound, has not forgotten a single moment of the terrible evening.

He recalls that at around 7.45 PM the villagers were getting back to their houses after celebrating “Hola Mohalla,” a festival that precedes Holi. It was at that time that the terrorist came in two groups from separate ends of the village. They told the Sikhs to separate out from the rest of the people. Since they were wearing military fatigues the villagers thought that the Army was carrying out a routine search, hence, the Sikhs went to one side willingly.

Once segregated, the Sikhs were lined up outside the Gurudwara (Sikhs temple) and indiscriminate fire was opened upon them. More bullets were pumped into fallen bodies to ensure that none survived. Nanak Singh lost his son Gurmeet Singh (16) brother Darbari Singh (30) and three first cousins in the shoot-out.

Nanak Singh cannot forget that after the barbaric act the terrorist were laughing and sending ‘mission accomplished’ message from their radio sets.

Pakistan, Kashmiri separatists and terrorism sponsors residing in Pakistan were quick to deny any involvement in the massacre. They accused the Indian security forces of having carried out the attack in order to ‘malign the Kashmiri struggle.’

“The Mujahideen have nothing against the Sikh community, which sympathises with our struggle,” stated Syed Salahuddin, chief of the terrorist organisation, Hizbul Mujahideen.

A little later, one Mohammad Suhail Malik of Sialkot, Pakistan, while in custody, gave an interview to Barry Bearak, a reporter of the New York Times in which he confessed his involvement in the massacre at the direction of the Lashkar-e-Toiba (LeT). LeT is a terrorist organisation that has, since long, been infiltrating terrorists into Jammu and Kashmir.

The role of the LeT in the attack has been further established, only a few months back, by David Headley, a Pakistani-American operative of the o9rganisation who is in custody for involvement in the 2008 terrorist attack by Pakistanis on the Indian city of Mumbai.

President Clinton did condemn the massacre but stopped short of apportioning any blame. His visit to India went on as scheduled. Thus culminated the reaction of the person for whom this horrible dance of death was played out.

The terrorists showed no respect for the communal harmony inherent to the land, its holiness and its sanctity. Nevertheless, the Sikh community of the village, true to its tradition of resilience and courage, absorbed the shock and got back to normalcy in a short period of time. In this process they were assisted by their Muslim neighbours.

The healing process was initiated within two weeks by opening of the Khalsa (Sikh) School which, despite being a school managed by the Sikh community, had six teachers and about 105 Muslim students on its roll.

“Mutual suspicion had ruined everything between the two communities after the massacre. But after the school opened, we too started talking to each other and relations started normalising soon.” said Jagdish Kaur, a teacher in the Khalsa School.

The women of the Sikh community, who had lost almost all male relatives in the massacre, stoically got down to picking the pieces of their shattered lives and look towards the upbringing and well being of their children. Some got government jobs while others worked the fields like men to make both ends meet.

Now, 16 years after the incident, it would be pertinent to ask what exactly did the terrorists gain from this evil, immoral anti-religious act. Bill Clinton did not take any action at all except for tightening somewhat the noose on terrorism.

The Kashmiri people, disgusted by this dastardly act, decided to fight the terrorists. They started assisting the security forces and thus began the beginning of the end of terrorism in the valley.

The exodus of the Sikh community from the Kashmir valley that was expected after the attack never took place. The Sikhs held their ground most admirably and defeated the terrorists by virtue of their grit and determination.

Pakistan, over the years, become a hub of terror and is reeling under the impact of the evil monster that it created to break the will of the people of Jammu and Kashmir.

On the anniversary of this tragic incident it is time to pray for the souls of the innocent people who lost their life to evil forces and salute the courage of those left behind.

It also provides an opportunity to the youth of the valley, who are being attracted to the path of violence, to reflect on the futility and immorality of following such a path.  Nothing was achieved by the mindless killing of innocents then and nothing will be achieved in the future also. Terrorist were defeated then they will be defeated in future also

Democracy provides many other means to express political it is such means that they should use to highlight divergent aspirations and ideologies rather than resorting to violence.