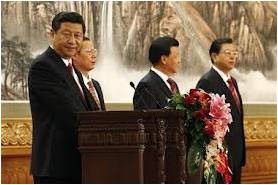 A comment made by the Indian Naval Chief about enhanced Indian geo-strategic involvement in the South China sea has, as expected, raised the heckles of the Chinese leadership. The stringent response by the Chinese foreign ministry has come at a time when there is increasing speculation about the effect that the eminent leadership change will have on the relations between the two Asian giants. The Chinese response goes to prove that regardless of the growing economic affiliation between Indian and China or a change in the leadership, in matters concerning geo-strategy the latter country would probably not yield any ground.

The Chinese Vice President Xi Jinping who is poised to take on the mantle of leadership from Hu Jintao is often referred to as a “princeling” because of his family’s place in the communist party aristocracy; furthermore, he has adequate experience to handle the top job. There is, however, a veil of opacity around his future policies even though from January this year he has embarked on several foreign visits including one to the United States. That he would keep a lid on his thoughts is to be expected since the Chinese leadership functions on consensus and shuns sudden changes. This does not diminish the reality that he and his team have to gear up to face some daunting domestic and global challenges.

Under the outgoing dispensation the country has managed to sustain high economic growth; millions of people having been pushed out from the poverty index. This has, however, not translated into the internal harmony that Hu Jintao was looking for; there is rising unrest in China which the government is trying to put under the carpet by censorship and use of brute force, yet the cracks are there for all to see.

Militarily, the country has made huge progress; officially the Chinese defence budget has been declared as $106.5 billion, in actuality it is around $ 180 billion, almost three times more than what the Indian government is ready to shell out. More important is rapid strides made in the field of indigenous defence research and production which has given China astounding air and maritime capability. A prime example is the fifth-generation J-20 radar-evading stealth fighter rolled out in January 2011, not to talk of the vast array of cruise missiles; short and medium range ballistic missiles both land and sea based which have the capability to hit targets across the world and of course the whole of India. The Chinese are also proud possessors of an aircraft carrier, the Varyag, of Ukrainian origin.

In tune with its growing military muscle, China has adopted a more assertive foreign policy of late; this is a major deviation from the low profile followed by previous leaders like Deng. As a result the country has issues in the open with its neighbours like Japan, Philippines, Malaysia, Brunei, Taiwan, Vietnam and India. So far as India is concerned there are three areas in which engagement with china attains criticality; the border dispute to be seen in concert with the larger defence and security matters; the economic relationship and the Pakistan factor.

It is the defence and security paradigm that gains maximum significance. In this, the spat over the South China sea is almost a non issue even though it may have some serious diplomatic connotations in the long run. What is more important is the security concerns of late which have led to stapling of visas for people of Jammu and Kashmir and Arunachal Pradesh by the Chinese foreign office amidst avid protests from India and even a breakdown of defence cooperation between the two countries. Chinese presence in Pakistan Occupied Kashmir and the Shaksgam valley near the Siachen glacier makes the country an active partner in Pakistan’s illegal occupation of Indian territory; Chinese incursions on the line of actual control on the borders continue despite protests from India. Their claim to Arunachal has been expressed in more ways than one.

The Chinese armed forces have recently carried out military exercises to fine tune employability along the Himalayan ranges in and around Tibet; It has tested its air capability with its potent J -10 fighter jet and also practiced its rail mobilisation drills for quick deployment in the Tibetan Plateau; the Chinese army has been rehearsing capture of mountain passes with the help of armoured vehicles and airborne troops; such manoeuvres can be against none but India. The situation has eased somewhat with the recent visit of the Chinese Defence Minister to New Delhi.

The India-Pakistan-China triangle continues to be as messy as ever; despite evidence of Jihadi activity from Pakistan causing disturbance in the Xinjiang province of China, the latter country is not ready to dilute support to its wayward neighbour. If the support was restricted to economic and diplomatic assistance India would have less to worry about. The real cause of concern is the blatant manner in which China is supporting and building up Pakistan’s military nuclear programme which has given Pakistan an edge over India.

The Dalai Lama, when queried about the change in Chinese leadership said, “At this moment, it is too early to say definite. Individuals – now new leadership, younger age and also many his friends say that he is more open-minded but system is such that one or two individual cannot do much, so better to wait another six months, or a year or two (sic) like that.” The situation cannot be summarised in a better manner; the recent Chinese reaction to the statement made by the Indian naval chief helps reinforce this view. The problems and challenges are there for all to see, what will be the response is something that only time will tell. For the moment it would not be wrong to suggest that Xi Jinping may not be amenable to upset the apple cart, however, leaders do have a tendency to spring surprises every now and then.