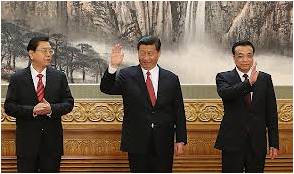 March, 05, 2013, heralded a leadership change in China after the customary decade long stint of the outgoing leadership. The change took place during a session of the Chinese Parliament in the Great Hall of the People in Beijing. A silver lining in the transition process was that despite its fair share of intrigue, rivalry, speculation etc, the changeover was carried out without any major upheaval and in a peaceful manner. This, by itself, is a big achievement given the fact that such a smooth transition has happened only for the second time in the history of the country.

The key note address in the historic session of parliament was delivered by the outgoing premier, Wen Jiabao. He took the opportunity to render advise to the new dispensation by summarising the achievements of the previous government in the last five years or so. A steady upward graph of the economy was identified as a major milestone of the outgoing leadership. The success achieved in escaping the global recession and maintenance of a steady growth trajectory with creation of 58.7 million urban jobs, holding of the Olympic Games and construction of about 9000 kms of high speed rail were listed out as the major economic landmarks amongst a host of others.

Notably, the defence policy of the country and the rapid military expansion carried out by the outgoing regime were not touched upon at all. The coercive diplomatic posture adopted by the Chinese government in the same period was also not referred to. This is not surprising given the fact that military matters are traditionally kept under wraps by the Chinese leadership.

Notwithstanding the lack of transparency in military matters, the new leadership has exhibited a firm resolve to carry on with the policies of the previous regime in this regard. Within a few days of taking over the government has announced an increase of 10.7% in the defence outlay of the country. The total projected outlay would now stand at about 720.168 billion yaun ($115.7 billion). The government has also given a considerable hike to public security spending which would give a boost to the police services. Apparently, President XI Jiping, being the son of a well known general, as also, having served as an aide to a senior general early on in his career, would not be expected to reduce the focus on rapid defence modernisation and expansion of the army. It is also quite evident that the new leadership is not likely to change the nations traditional posture on territorial claims be it in the areas of the East China Sea, the South China Sea or the Himalayan border with India.

China’s steep hike in defence expenditure and stringent diplomatic posture has sent anxious tremors in the immediate neighbourhood of Asian and South Asian countries. Japan has viewed the development with great concern since it comes in close proximity to the spat that took place over the uninhabited Diaoyu islands that are claimed by Japan, China and Taiwan. In recent days Japan has described the Chinese posture as ‘overbearing”.

The writing on the wall is that not much change in Chinese policy can be expected as a result of the change in leadership. The Chinese are not likely to digress from the course of military hegemony; instead, the country will go into a coercive diplomacy mode progressively as its military might increases. The smaller countries in the immediate neighbourhood are likely to feel the heat much earlier than India which has enough military muscle to elicit a degree of restraint for the moment.

India can, therefore, expect that the border dispute will be kept alive by China but without causing any diplomatic upheavals in the ongoing relationship. There will be no statesmanlike concessions and nor will there be any drastic changes in policy. The rapid military build up will, however, give to China an option in the longer run to press for some politico-military advantage. Indicators of this policy are the rapid steps that the PLA is taking to fine tune its high altitude warfare capability and the manner in which this is being publicised.

There can be no two views about India’s lack of capacity to catch up with Chinese military strength. Against this pragmatic backdrop, for India the imperative is to increase its military strength to an extent that keeps a check on Chinese hegemonic designs, the minimum that needs to be done is to deny overwhelming military ascendency to China. The objective should be to maintain a balance in military parity to an extent that constitutes causing an unacceptable level of damage in a situation of conflict

With the existing Indian defence outlay being no more than one third of what China is spending, this would definitely be a tall order. Even achievement of this minimal threshold would mean a lot of hard work for India. The government of the day will need to be alive to the security threat; it will have to ensure that the ever growing demand for economic growth is not allowed to override security. Diplomacy will, of course, play a significant role; India will need to keep itself involved with the security concerns of all such nations along the East and South China Sea’s that are distrustful of China. India will also do well by keeping the Tibetan issue in the forefront since this is where China’s position is not as strong as it would like it to be. Overall, India, needs to deal with China at multiple fronts in a manner that keeps national interest in primacy. To say that the new regime would be more forthcoming than the one gone by simply because Xi Jiping comes across as being more amenable than Hu Jitao would constitute a grave error of judgement