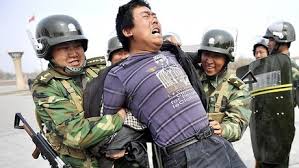 While the other countries of the world fight their own demons in the media glare China is one place where political problems are successfully kept under wraps. A prime example of the Chinese expertise in maintain secrecy is the manner in which blatant atrocity being committed in the Xinjiang province on ethnic Uyghur’s – Muslims of Turkish ancestry who have remained for many centuries in a state of conflict with the Han’s who constitute the main ethic group in China.

Recently, on June, 30, Chinese courts reportedly sent as many as 113 Muslims to prison for unspecified terms on charges of being a part of terrorist activities and some civil crimes thrown in for good measure. The “crimes” listed out included – inciting communal hatred, harbouring criminals; bigamy; drug trafficking; destruction of evidence; belonging to a terrorist organisation etc. The jail terms extend up to 10 years in some cases. Courts of 11 counties and cities in Kashgar region were pressed into service to mete out the sentences. Even though the ethnicity was not declared the names were distinctly Uyghur.

There have been many instances in the past few months when a repressive course of justice has been followed while dealing with the Uyghur Muslims. In an earlier instance in June, as many as 81 Uyghur’s were sentenced on terror related charges. On May, 28, in a unique method of court procedures, 55 people, once again Uyghur Muslims, were tried in a stadium in front of a crowd of several thousands. They were made to wear prominent orange coloured vests and stand in trucks with their heads bowed while being surrounded by military guards. The charges included terrorism, separatism and murder for which three were given death sentence while other got different degrees of prison terms.

This novel method of meting out justice in Kangaroo courts gained momentum after a May, 22, bomb blast in Urumqi (the capital city of the so-called Xinjiang Autonomous Region) that killed more than 30 people and wounded more than 90.

China is blatantly attempting to impose restrictions in the practice of the Muslim religion by the ethnic population. The very recent government diktat to students and civil servants in Xinjiang to avoid fasting during Ramadan has drawn international revulsion to an extent that China has been compelled to partially retract. This, however, is the first attempt; many more will be made to nibble into the will of the people. “They (Chinese) have trampled on the rights of the defendants to argue and appeal, accusing Uyghur’s who are rising against Chinas suppression and expressing their dissatisfaction of being terrorists,” says Dilxat Raxit, a spokesman of the World Uyghur Congress.

The beauty of the situation is that what is today passed off as western China, predominantly the Xinjiang province, is historically not a part of the erstwhile Chinese Empire. It was the Peoples Liberation Army of the communist regime that forcibly annexed the region in 1949. The Uyghur’s are now called rebels.

Once occupied, China set about a well planned agenda to change the demographic pattern of the region by settlement of a large chunk of Han Chinese over there. It is only natural that Uyghur’s look upon the Han’s as outsiders who have forcibly occupied their land and are now blatantly colonising the resource rich region with active connivance of all tools of state power.

The relationship between the ethnic Uyghur and the Chinese Han in the Xinjiang province was not always acrimonious. In the middle of the 20th century around the 1950’s, Han Chinese living in Xinjiang did not experience any problems of co-existence. The deterioration has come by in the wake of opening up of the wealth of Xinjiang. Uyghur’s are convinced, and rightly so, that the Han Chinese have come in with the sole purpose of fulfilling their greed.

The Han population, on its part, is resentful of what it perceives to be a preferential treatment that the government reserves for the so-called minorities whose backward, uncivilized homeland is gaining by billions of dollars worth of investment. The Han’s feel that the Uyghur’s needlessly enjoy benefit of state largesse in the form of social welfare, exemption from the one child norm, reservations in government jobs, education etc.

The arguments on both sides cannot wish away the root cause for a conflict that has been created by the communist regime. It is very difficult to accept the manner in which China forcibly occupied the Xinjiang region, as also Tibet, while the world looked along silently. Now the regions are being used by the communist regime to further its strategic and economic agenda. A particularly worrying factor has always been the blatant attempt to change the demography; as the strength of the settlers is growing so is their acrimony towards the original community. The Uyghur’s have now started moving out to other parts of China to escape the unrelenting pressure in their own land.

Exiled Uyghur groups and human rights organisations across the world cannot be faulted for putting the blame of the unrest in the Xinjiang province on repressive politics being followed by the Chinese regime. Despite having committed this gross violation on the people, the Chinese government today describes the protest over there as separatism and more agonizingly – “terrorism.” Now a stage has come when even the religious practices of the people are being curtailed.

China must realise that it cannot fool the world by insisting that the people of Xinjiang are being led on a wayward path by some evil Mullahs. It cannot pass off the violence as terrorism and punish people en-mass to create an aura of fear through blatant state sponsored terrorism. Having taken over the region it would China’s purpose would be best served by doing everything possible to facilitate its smooth integration. This would be possible only if reconciliation is used as a tool rather than brute force.