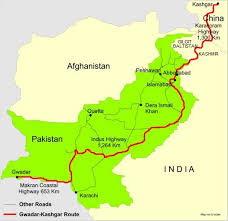 Media reports, emanating from Pakistan, suggest that the Indian High Commissioner to Pakistan. T.C.A. Raghavan has stated in a recent function that, “India is not perturbed over Pakistan-China cooperation through the China Pakistan Economic Corridor (CPEC), rather a stable Pakistan is in favour of India which wants to achieve its high economic growth with the help of regional stability.”

This may be an old report recycled by the Pakistani newspapers and picked by Indian online portals.  A similar comment has been quoted by an Indian analyst in a China piece written a few months back.

The statement, if made, comes across as surprising since it is contradictory to the concerns that India should be voicing with regard to the implementation of CPEC through Gilgit-Baltistan which is Indian territory forcibly occupied by Pakistan. Significantly, a portion of Gilgit-Baltistan has been illegally ceded by Pakistan to China.

The veracity of the comment is also questionable when seen in the context of an official Indian statement, “Government has seen reports with regard to China and Pakistan being involved in infrastructure building activities in Pakistan Occupied Kashmir (POK), including construction of China-Pakistan Economic Corridor. Government has conveyed its concerns to China about their activities in Pakistan Occupied Kashmir, and asked them to cease such activities.”

Pakistan President Mamnoon Hussain has criticised India and blamed it for a “shameless propaganda” against the CPEC that runs through Pakistan administered Kashmir. He has reiterated the Government’s determination to complete the project.
It is quite evident that Pakistan has launched a carefully orchestrated campaign to counter any strong position that India would take on the subject. Through contradictory statements and strategic media insertions, a deliberate attempt is being to push forward the project under a veil of confusion.

Post the decision to build CPEC, China has also adopted a proactive diplomatic posture against India with regard to Jammu and Kashmir. It is now pursuing an incremental diplomatic policy to justify and strength its presence in Pakistan, especially the occupied regions. It has shed its neutral position on the India-Pakistan dispute and has started supporting Pakistan’s occupation of the territories of the Indian state of Jammu and Kashmir, especially such portions of which it is now a stake holder. On top of it, China has the gumption to invite India to participate in the Silk Route ‘one route one belt’ project.

Sadly, despite the postures adopted by both Pakistan and China that are so obviously against Indian interests in the region, India has opted for a weak, non-confrontational position. It is bending both ways by flagging the issue but not strongly enough. This is a part of its flawed policy of avoiding confrontation with China.

In fact, the issue is not even being seriously debated by the intelligentsia or the opinion makers in India let alone the government. The lack of application is surprising given the geo-strategic implication of the development.

Undoubtedly, an economically strong Pakistan would serve Indian interests but the strength should be gained by inherent resilience and not riding piggy back on an exploitative neighbouring country. Pakistan’s position looks even more precarious when seen against the very obvious attempt by China to convert the country into a vassal state by use of the economic bait.

It is well known that China did not allow the Port of Singapore Authority (PSA) to run the Gawadar port as a profitable venture. There is a strong probability that the PSA was paid by the Chinese to show losses and bail out to pave the way for the Chinese state run firm, China Overseas Port Holding Company (COPHC) to take over the operations, as it has.

The leadership in Pakistan should be wary of such machinations by China. It should look closely at the reasons behind hardnosed Chinese businessmen being ready to sink billions into a project that has not shown any economic potential till date.

The going is not likely to be as smooth for China as it believes at the moment. Already there are protests in the frontier provinces of Pakistan about the western alignment of the CPEC whereby their stake on the projected “development” would be reduced considerably. The leadership and civil society of these provinces is making no bones about its disaffection and is terming it as a China-Punjab and not a China-Pakistan economic corridor.

In case the government does not address the concerns of the smaller provinces a long term confrontation would be on the cards. When seen along with the turbulent situation of insurgency in Baluchistan, where the Gawadar port is located, and the disaffection in Gilgit-Baltistan due to years of neglect and exploitation, China should realise that it has much to contend with before it can reap the harvest that it is looking for.

By opening its borders with Pakistan, China is also opening up its restive Xinjiang Province to Jihadist culture and propaganda. The Chinese probably do not understand the global proliferation of fundamentalist Islam. They are under an illusion, a misconceived notion, that their Muslim population will remain isolated.

Against the background of the aforementioned argument, it can also be surmised that the Indian establishment is adopting a wait and watch policy on the assumption that the initiative will fail due to its inherent contradictions. The Indian establishment may be looking at the project as a catalyst for the economic and strategic decline of China.

Such thinking, however, is not wise. It is not a manner in which a nation of the stature of India should pan out its responses to regional alignments. When Indian territories are being eyed covetously, when Indian security is being threatened, the country should not sit back on the strength of notional analysis. It should move forward, all guns firing, to expose the evil designs of its neighbours and propel the international community into taking action.

(Mehtab Karan Singh is a USA based engineer and columnist)