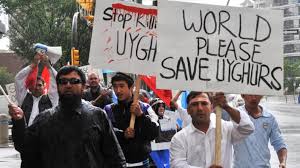 While remaining busy for many decades in supporting the radical Islamist policies being followed by Pakistan, China is today finding itself on the other side of the fence. It is staring in the face of a burgeoning Islamist threat in its own backyard. The ISIS has marked its presence in the Xinjiang Province which is witnessing an uprising by its ethnic Uighur Muslims. The Uighur’s, as in the case of Tibetans, are fighting to rid their land of Chinese suzerainty and forcible occupation.

The Xinjiang region is originally a part of the Turkic belt of Kyrgyzstan, Mongolia, Kazakhstan and Tajikistan and was forcibly occupied by China in 1949.

ISIS has released a series of videos of the ethnic Uighur Muslims of Xinjiang being trained as Islamic militants in Iraq. The intent of the ISIS became more pronounced with a sudden increase in knife attacks in Xinjiang. It has been reported that eight people were killed and 10 injured in a knife attack by three men in the province. The incidents have heralded a marked increase in tensions between the Han Chinese and Uighur freedom fighters. The administration responded by carrying out a show of military presence over there.

The Chinese leadership is quite shaken up by the open challenge now being posed by the ISIS. It would be reasonable to presume that the Uighur’s would not be averse to support coming from the ultra-radical Islamic organisation.

It is being widely believed that the ISIS has aligned with the East Turkic Islamic Movement (ETIM) which is an established group of the Uighur Muslims challenging the Chinese occupation. ETIM is known to advocate armed uprising as a means of furthering its objective of attaining freedom from the Chinese yoke.

China has often accused Pakistan of harbouring militants of the ETIM in its restive North West Frontier Province (NWFP) but Pakistan somehow manages to creep out of the embarrassing situation by insisting that it is also involved in containing home grown militancy in the restive area adjoining Xinjiang.

The anxiety of the Chinese leadership also emanates from the fact that the region has received a lot of investment from Beijing more, of course, with the intention of exploiting its rich mineral resources than any love for the locals. The area has also been converted into a vast industrial hub, not to bring up the quality of life of the locals, but to save the mainland from dangerous industrial emissions.

Investment is Xinjiang is growing at a fast pace with a recent financial outlay of $25 billion being sanctioned for upgrading infrastructure. Definitely, China is in no mood to give up on its occupied territories.

The evolving situation has China very worried about the potential of the uprising cascading into a full blown insurgency. The country is reacting with a drastic increase in military presence and large scale arrests of Uighur’s even on the slightest suspicion of being associated with the freedom movement or the ISIS.

The Uighur’s are not the only Muslim community in China; it has an ethnic Muslim Hui population in the South-West border province of Yunnan. The Chinese however look upon the Hui as nationalists since they come across as better assimilated with the Han and tend to speak more about nationalism than religion. China encourages Muslim tourism to Yunnan, especially Shadian, to show case the “Islamic atmosphere” of the country.

The Chinese Constitution guarantees freedom of belief, but at the same time, the communist leadership frowns upon overt religious activity and attempts to keep it under strict control.

In this, however, the difference between the Chinese treatment to its Uighur and Hui Muslims is stark. For the Uighurs, beards, head covers for women and fasting during Ramzan is forbidden. No such restriction is placed on the Hui population. Restrictions have been imposed upon the Uighurs with regard to teaching of religion and following of religious practices while the Hui’s in Yunnan freely send their children to Mosques for religious training.

Recently, China has expanded the existing restrictions on Uighurs by laying out 15 new rules as a part of its so-called campaign against religious extremism. These require government workers to “dissuade” women from covering their faces and bodies fully; naming children in a manner that exaggerates religious fervour and conduct of marriages using legal and not religious procedures.

The burgeoning presence of ISIS in the Islamist uprising has raised apprehensions of radical Islam finding a wider acceptance among the Muslim population of the country. In case something of this sort happens then the Hui Muslims will also face religious suppression akin to what is being witnessed against the Uighurs in Xinjiang. It is notable that during the cultural revolution the People’s Liberation Army killed more than 1,000 Hui in Shadian in crackdowns on Muslims; there is no guarantee that the act will not be repeated in the future.

Some rumblings against Islam as a whole are being heard in the predominant Han population of the country; many among the Han propagate a view that both groups are equally threatening. Internet content in this regard is being generated. The communist regime cannot remain divorced from this growing perception.

In case China resorts to dealing with the situation with a heavy hand, as is its wont, the entire 20 million plus Muslim population of the country will get affected.

It would be in China’s interest to join hands with India and find a common platform to challenge radical Islamisation of the region. At this stage making a division between “Good lslamists” (Those directed by Pakistan towards India) and “Bad Islamists” (Those directed by Pakistan towards Xinjiang) would serve no purpose. The ball is rightly and firmly in the court of the Chinese.

(Jasbir Sarai is a reputed defense analyst and activist of AAP)