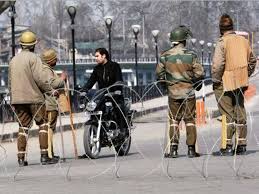 A person visiting Srinagar, Kashmir, after the gap of a year or so cannot help but feel that a lot has changed during this period. A drive from the airport to the city cruises through a bustling sea of humanity going about their days work without fear or intimidation, a welcome departure from the tension that was in the air earlier. A significant change is removal of the obnoxious bunkers that were an eyesore. The removal of the bunkers, however, seems to have created another problem. The security forces (Police and paramilitary) that were earlier within the bunkers are now out in the open. With no cover available, they are seen lounging around on the sides of the roads and pavements.

More than their presence it is the uniform of these personnel that is a cause for deep concern. Even though the police paramilitary personnel were, by and large, donning Khaki uniforms as authorised to them, the upper body was covered with warm jackets in different disruptive patterns or disruptive pattern bullet proof vests; the head was covered with olive green coloured helmets or disruptive pattern bullet-proof helmets. This potpourri of dress (with no two persons on duty dressed alike) made the brave security personnel look like villains from a Bollywood movie.

Uniform and combat dress of the security forces operating in Jammu and Kashmir has been a sensitive subject for more than a decade now. In the year 2002, the Central Reserve Police Force (CRPF) decided to switch over to Disruptive Pattern Material (DPM) for their combat uniforms. The cloth identified and purchased at that stage raised many eyebrows for its quality and price, but that is beyond the purview of the discussion at hand. The DPM uniforms were issued to the CRPF personnel operating in Jammu and Kashmir.

The Indian army whose standard uniform was olive green in colour had introduced DPM combat dress many years earlier. Now with the paramilitary also wearing a similar pattern of combat dress they were no longer distinctive from the soldiers of the Indian Army. With all forces operating in Jammu and Kashmir, especially the Kashmir valley, being similarly attired in DPM that is predominantly associated with armies across the world, an impression was created that the Army was deployed in the region in vast numbers. This, in turn, led to the wrong impression that Kashmir was the most militarised zone in the world. Further, it became difficult to pin point responsibility for security and disciplinary lapses since the locals could not differentiate one from the other.

The situation mulled along for a few years till the security situation in the state took a turn for the better and presence of the army in the urban areas was considerably reduced. Even after this reduction the aura of the region being a militarised zone persisted due to the DPM combat fatigues of the police and paramilitary forces.

In 2005, then Army Chief General JJ Singh in a letter to Home Minister Shivraj Patil expressing concern about the indiscriminate use of DPM that was adversely impacting the efforts to dispel the impression of the valley being a war zone. “These fatigues are not needed for patrolling cities. Why can’t the Para-military men wear their usual Khaki’s?” wondered the General. The fragile ego of the bureaucracy got hurt and it refused to even consider the point. It termed wearing of the DPM as a fundamental operational requirement even though such a dress pattern gives no benefit in urban areas. In any case, bringing about a change would have established that a switch over to the DPM combat dress a few years back was a wrong decision and quite obviously this embarrassment was not acceptable. The Home Minister, never known to for decisiveness, let the matter pass by.

The problem festered for a few more years before it was taken up head-on in 2009 by none other than Chief Minister Omar Abdullah. In this instance the media carried figures to substantiate the point made by the Chief Minister. 30 Army battalions then deployed in Kashmir amounted to 30,000 men against which 32 battalions of the CRPF and 19 of the BSF added up to a strength of 51,000 men. It was established that if the paramilitary forces shed the DPM combat fatigues the visibility of combat gear would go down by an astounding 61%. The Union government finally decided that the paramilitary forces would patrol the streets in Khakis.

Giving a policy decision is one thing, its implementation on ground is quite another. Now who would account for the crores of rupees spent in providing the paramilitary men with DPM gear? Hence, the order is being implemented only partially in some urban centres. The second, more critical aspect – orders for manufacture of the bullet-proof vests, warm jackets, helmets and bullet-proof headgear in Khaki colour do not seem to have been placed and it continues to come in disruptive pattern?

It is very hurtful to speak thus about a brave body of men who deserve the highest approbation. Yet to keep quiet with the intention of not hurting their feeling would also not be correct. That they look comical in their assortment of dress is realism; but this is not their fault, it is the fault of officials in the Home Ministry who are, as usual, unconcerned about the ground reality. What the Chief Minister had wanted and what General JJ Singh followed by all other Chiefs after him had unsuccessfully articulated has not been achieved on ground due to half-cocked implementation of the order.

There is also the question of morale, a badly turned-out force is always low on morale and self esteem; further, it does not win the respect of the people. It is for this reason that the police force of developed nations is always immaculately dressed. Now that it has been decided that the paramilitary and police forces will be attired in Khakis in Jammu and Kashmir they should be in Khaki from head to foot and that too in the smartest possible uniforms so that they can go about performing their duty with high moral and full confidence.