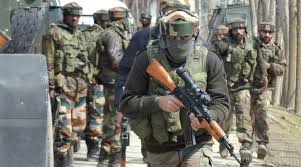 The terror machinery operating from Pakistan has reactivated itself in a big way.  The fallout has been concerted ceasefire violations along the Line of Control (LOC) and the International Border (IB) in Jammu and Kashmir, mainly with the objective of facilitating infiltration. Terrorist activity in the hinterland of the State is also being orchestrated in accordance with well laid out plans.

The unfortunate death of an officer and two soldiers of the Indian Army on the LOC due to enemy fire/shelling, the daring attack on a hospital in Kashmir followed by the attack on an Army camp in Jammu are manifestations of the energised Pakistani “establishment.”

The aforementioned development is an indicator of establishments’ determination to continue with its evil designs, despite the massive setback that its terror machinery in Kashmir has faced all through the year 2017. The killing of more than 200 terrorists by Indian security forces in sustained counter-terrorist operations  in 2017 would have broken the back of any organisation, but the terror mongers in Pakistan are evidently made of sterner stuff. They are now bouncing back with renewed vigour.

Human life, quite obviously, holds no value for them and the recruitment base looks to be very active. There is always a large number of terrorists ready to take the place of those who have been killed, the only problem is successful infiltration and here too immense casualties are being accepted simply to get a few terrorists across.

The sustained attacks on India’s security and integrity have led to a sense of disquiet across the country. More and more people have taken to social media and other forums to express anguish about the terrible loss of life that our armed forces and other security forces are absorbing due to the evil acts of the neighbouring country. The humiliation that our soldiers, Police and paramilitary personnel have to face in the hands of the stone-pelters, paid by stooges of foreign powers, is also causing deep rooted frustration and anger among the Indian masses. It must be remembered that soldiers in India are revered and their being dishonoured from stone-pelters and other miscreants while performing their duty is absolutely intolerable.

The surgical strike carried out against terror modules in September has not had the desired effect of inhibiting Pakistan. If anything, the country has become more recalcitrant than before.

There exists an urgent need to carry out a course correction of the policy adopted to rein in Pakistan. Mere words can no longer suffice in dealing with the rogue country! India has to give out a strong and clear message that continued interference in her internal affairs is simply not acceptable. The very least that needs to be done immediately is severing of diplomatic ties, cutting in the Most Favoured Nation (MFN) status and a rethink on agreements like the Indus Water Treaty.

All proxies of Pakistan functioning in Jammu & Kashmir like the Hurriyat Conference need to be dealt with an iron hand. Mollycoddling them to uphold democratic norms, as has been the norm all these years, is no longer an option. They are causing immense harm to the collective psyche of the Kashmiri people, especially the younger generation, with their propagandist machinations; they are responsible for the humiliation that Indian security forces are facing over there. It is time to make them pay a heavy price for their anti-national activities.

It is quite apparent that any thought of a letdown in the security threshold in Jammu & Kashmir on the basis of the success achieved in counter-terrorist and counter-infiltration operations would be misplaced.

The debate on AFSPA, therefore, needs to be quelled once and for all! A professional position on AFSPA would entail continuation of the legislation until absolute peace takes firm root in the State. This would possible only after total eradication of foreign sponsored terrorism and religious fundamentalism in the region. In fact, so long as the intention and capacity of the foreign inimical powers to spread terrorism and religious fundamentalism stays intact, the idea of revocation of AFSPA cannot be given credence.

The imperative need is to clip the wings of the terror infested forces operating from Pakistan. Change in the security threshold of the state can be considered only after this first step has been achieved and that too irretrievably.

It is common knowledge that the terrorists are an extension of the Pakistani military machine. Hence Pakistan is striking deep into Indian territories with her military assets while India is in a defensive mode. Such a situation cannot be accepted by any self respecting nation and the world should be made increasingly aware of this fact. The international perception of Pakistan being a hotbed for proliferation of terror is well known. Particularly significant is the disgruntlement of the Trump administration with Pakistan. The US has considerably decreased aid to Pakistan and there is a discernable impatience with the militant elements like the Jaish-e-Mohammad and the Haqqanni network operating from Pakistani soil.

While considering military options India should leverage the aforementioned world opinion about Pakistan. She should carefully calibrate the possibility of  dealing a body blow to the Pakistan military apparatus operating along the LOC and IB from where cease fire violations are being engineered and infiltration facilitated.

Further procrastination will have a very demoralising effect on the armed forces and other security forces, who are bearing the brunt of Pakistan’s protracted hostility. It will also manifest doubts in the mind of the common man about the capability of the nation to deal with her enemies. Such a situation would be disastrous for the nation. It is, therefore, time to catch the bull by the horns!

Pakistan needs to be hit in a manner that it is hurt enough to rein in its rogue elements. There can be calibration of Indian response but at the end of it all, if the matter stops at all out war, so be it. India needs to immediately start putting in place the national effort required for such an eventuality.

(The writer is a reputed defense and security analyst)