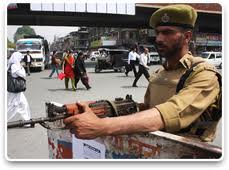 The state of Jammu and Kashmir is undergoing a transformation. The two decade long shadow of terrorism is waning slowly but surely. At the same time, forces of disruption are trying their level best to keep turmoil alive. Such ambitions translate into law and order problems of a different type than what is seen in other states of the nation. The recent incident in Gool, Ramban, is one such example; there being many protests of a similar nature and more acrimonious especially so in the Kashmir valley happening quite regularly.

There is talk of a change in the security paradigm commensurate with the changing situation on ground; more responsibility is being sought to be placed on JK Police with the Army and Paramilitary forces fading into the background. This can be possible only if the police force muster’s the will and the determination to rise up to the occasion and take on law and order as well as security responsibilities on its shoulders – by no means an easy task.

It cannot be denied that Policing in Jammu and Kashmir has some unique manifestations which go beyond the ordinary. These require special infrastructure, special skills and the will to walk the extra mile. Traditionally, the people of all three regions of Jammu and Kashmir are docile, peace loving and law abiding. Fortunately, they have managed to maintain their values, civilization and culture despite having been subjected to unspeakable violence and terrorism. As a result, the State is comparatively free of vicious law and order problems as are being faced by other cities and states in India. The number of burglaries, murders, rapes, cases of road rage, accidents, killing of old people, suicides etc, are less in J&K as compared to many other states in India. Hence, basic law and order, which is the main job of the police is the least of the problems that JK Police has to face.

The main challenge emerges from politics of agitation, internal security requirements and crisis situations. The fractured polity of the State, sadly, has the capacity to engineer riot like situations and marked violence that the police is required to handle before politics can take over. The manner in which crisis situations are handled by the police indicates the lack of ability of the force. In the Gool, Ramban crisis it was the Police that should have come forward to handle the situation; the Police was there but it was not effective enough to control the crowd. It did not show the degree of professionalism that one would have expected after so many years of working in the disruptive environment that was prevalent in the area. A law and order problem that should have remained in the domain of the Police force only has now gone right up to the Union government.

With regard to foreign sponsored terrorism, the army can be expected to play a role in curbing infiltration along the line of control. Some assistance may be given to the Police in counter-terrorism operations by both the Army and the Para-military forces. A mechanism for all this can be worked out. Beyond this, to be looked upon as an independent entity the police has to gear up to take on responsibility to maintain law and order, deal with political unrest and hold centre stage in the counter terrorism operations – a tall order indeed.

Is the JK Police building a capacity to meet this challenge? If it is then the same is a closely guarded secret since the basic transparency that is required to generate a debate and some intellectual discussion on the subject is not forthcoming. Actions being taken to build capacity are not in the public domain. Not much is known about the route of modernisation and reform that the force intends to take. Information is sporadic and rigidly controlled. What can be inferred from performance on ground, as has been spoken of already, does not instill the required degree of confidence.

Communication and public relations have a lot to do in bringing about the required awareness and the confidence. Passage of information to and fro can lead to active participation of the people in the generative process. Such a two way process will also build the confidence of the government to take on the very challenging responsibility head on rather than in bits and pieces, as is happening presently.

In case the government of Jammu and Kashmir is serious about taking on a major portion of the security responsibility in the State then it will have to take credible steps to build capacity of its police force. The requirement is not restricted to bringing the force up to the level obtained in other States; it is to take the force way ahead in view of the peculiar conditions under which it is expected to perform. Secondly, the force does not only have to be the best, it also has to be seen to be the best so as to instill the required confidence in the people. This process is linked with the repeal of enabling legislations like the Armed Forces Special Powers Act, Public Safety Act, Disturbed Area Act etc. So long as the Police requires the support of the Army and the Para-military forces these legislations cannot be repealed. The ball can be set rolling only after the JK police comes out on its own, the cart cannot be put before the horse.

The people’s aspirations for true “normalcy” can be met only if the JK Police is energised to take on the challenge of security in its entirety. To move in uncharted terrain is a challenge in itself and to do so while performing routine functions under difficult conditions is all the more difficult. It is well understood that the task at hand is not easy but a beginning has to be made if an end result is to be achieved.