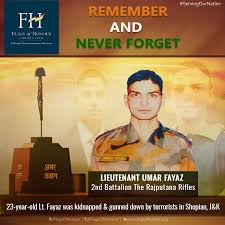 A unique environment of brutality and disregard to religious propriety has enveloped the Kashmir Valley. Some evil elements over there have lost all morality in their pursuit of a malevolent foreign sponsored agenda.

The cold blooded and vicious murder of a young Kashmiri Indian Army officer, Lieutenant Umar Fayaz is an act that has horrified the entire world, not to talk of the nation. The young officer was not even posted in Kashmir; he was there only to attend a family function.

His killing is a mindless, animist act that has no justification. A beautiful life has been snuffed out and an entire family has been reduced to depths of despair and despondency for no reason whatsoever.

Young Umar is just one of the many Kashmiris who have been targeted by the terrorists for working in the Indian job market, both government and civilian.

In some recent instances, Kashmiri personnel working with Jammu Kashmir Police, Jammu Kashmir Bank, political parties, private companies etc. have been killed mercilessly by the terrorists. These innocent people were doing nothing dangerous or detrimental to the cause of separatism. They were simply working hard to support and sustain their families. Now Umar’s family, like theirs, has been reduced to a perpetual state of misery by the perpetrators of evil.

There are two questions that one would like to ask from these so-called arbiters of the Kashmiri destiny – is pursuit of their goal on the blood of their own kith and kin acceptable to them and their society?  Would the “liberation” that they are looking for be worth it when their land in littered with the graves of innocents whom they have killed?

Apart from those who are being targeted in the Kashmir Valley, there are lakhs of Kashmiris working across India and also across the world with an Indian identity. We have Kashmiri bureaucrats, government servants, government contractors, executives in corporations doing business with the Indian government, Kashmir salesmen selling shawls, carpets etc to Indian citizens in Indian cities, expatriates etc. Do the self appointed messiahs of Kashmir have a plan to kill all such people as and when they visit their homeland?

The immorality of the foreign sponsored terrorists and their over ground supporters who try to pass off as mass leaders does not end here. They have no shame in blatantly using their religious places to further their sinful activities.

In recent days, due to the pressure of sustained and relentless counter terrorist operations in Kashmir, the terrorists have resorted to hiding in Mosques with their arms and ammunition.

Security forces exercise restraint in attacking Mosques even when they know that terrorists are hiding inside and this gives the latter a high degree of security. They also carry out their intimidation and extortionist activities from the safe base provided by the Mosques.

Recently on May, 7, there was an incident where four terrorists joined the funeral procession of their slain accomplice Fayaz Ahmed Ashwar and fired in the air to “pay their respects.” It is believed that these terrorists had their base in a nearby Mosque. They came out, joined the procession and hastily went back to the safety of their hiding place. They would not have been so bold if they did not have a safe place nearby.

In the performance of such sacrilegious acts, the terrorists are being assisted by the so-called separatist leaders who have the Maulvis ([Priests of the Mosques) in their pay roll.

Their bluff is called when a counter terrorist operation is underway and nearby Mosques eulogise terrorism and Pakistan through messages on loud speakers. They egg on the civilians to interfere in the operations through sloganeering recorded in Pakistan.

The Maulvis’ get away by saying that they were forced to give shelter and that they agree to the terrorist diktats for fear of reprisal in case they refuse. In actuality, it is being done with voluntary connivance of all concerned.

The hideous act of killing innocents is a slur on the face of humanity; to kill innocent kith and kin amounts to hitting an absolute nadir of depravity. To use holy places for acts of violence constitutes violating religion. Elders and priests conniving with anti-social elements to convert their religious places into dens of vice and violence is the biggest sin.

All this and more is happening in Kashmir today! A wave of sinful depravity is overwhelming those who are fighting for a lost cause and are getting more and more desperate with each passing day as they stare at failure in the face. The cause is lost because it is not based on tenets of righteousness. What the terrorists and their accomplices are doing in Kashmir constitutes the highest threshold of human rights violation

It is very sad to see the docile and civilised Kashmir’s being subject to such unheard of levels of barbarity. The entire population in the Kashmir Valley is suffering immensely due to this foreign sponsored malignancy that is afflicting their beautiful land like a cancer. Sadly, not many voices are being raised to counter the blood lust. This is because of a fear of those who wield a gun and those who have hired goons at their disposal to intimidate civilians into subjugation.

On more than one earlier occasion, terrorism in Kashmir has been contained when the people, fed up with the atrocities of the terrorist have risen as a whole to assist security forces in its elimination.

The Indian Army feels, and rightly so, that the brutal killing of young Lieutenant Umar Fayaz will provide the catalyst for yet another people led movement to eliminate the immoral and vicious wave of terror and divisiveness that is once again attempting to raise its ugly head in the Kashmir Valley. It is hoped that the cycle of violence will cease at the earliest once again with active support of the people.