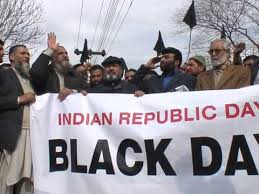 The separatists of Jammu and Kashmir have declared October, 27 as a “Black Day.” On this day in 1947, the Indian army landed in Srinagar airport and, against great odds, saved the people of Kashmir from large scale massacre, rape, loot and arson in the hands of the mercenary hordes of Kabilies (Tribal’s of the North West Frontier province) sent by Pakistan under the leadership of its army to annex the state.

To  term October, 27 as a Black day is, by far, the most unfortunate statement ever made by the separatists. There are some historical facts that should be kept above politics. The Indian army’s role in Indo-Pakistan War of 1947-48 is one of them.

The Indian troops who fought the war had only the safety and security of the Kashmir’s in mind. They did not know or care about how politics would play out in the long run. Their only concern was to ensure that the barbarians were thrown out in the shortest possible time without causing any further damage. In this they were singularly successful, but not without paying a heavy price including loss of lives of many soldiers.

While the war was a saga of heroism there are, in fact, a few black chapters in the contemporary history of the Kashmir valley that need to be highlighted.

The foremost among them is the Pakistan sponsored invasion in October 1947; the very invasion that the Indian army so gallantly crushed.

Before the Indian army landed in Srinagar and opposed the tribal onslaught, the invading hordes had laid waste everything, including every living being, that came their way. It was, however, in Baramulla that they surpassed all tenets of inhumanity. Baramulla was pillaged for four days. The men and children were tortured and killed while the women were raped and carried back as sex slaves. Even the Nuns of the Convent there were not spared; they were raped and killed ruthlessly.

Even under such terrible conditions the human spirit prevailed. A 19 year old boy, Maqbool Sherwani, went about on a cycle spreading a message that the Indian army was on the doors of Baramulla. This information restrained the mercenaries and saved thousands of lives. In fact, it stalled the march to Srinagar and literally saved the city from a fate even worse than that of Baramulla. When the Pakistanis realised that young Maqbool had misled them, they shot and crucified him. The young boy, with his courage and presence of mind, etched a place for himself in history for all times.

The second black period for the contemporary history of Kashmir came by in January 1990 when terrorists infiltrated by Pakistan issued a diktat to the Kashmir Pundits to leave. These diktats were made from the loudspeakers installed in Mosques in the Kashmir valley. Kashmir Pundits were told to convert or get out of the valley while leaving their women behind for the pleasure of the “Mujahidin.”

The diktat was followed by selective killing of prominent Pundits in the most brutal nature which forced a mass exodus of the peace loving community from their homeland. Within days the barbaric foreign elements had changed the history of the beautiful region forever. Two communities that had coexisted for millenniums in secular amity were broken apart by foreign forces supported by some misled elements within.

Every time some deceitful elements create disorder and divisiveness at the behest of Pakistan it becomes a black day for the people of the Kashmir valley. These elements are not allowing the people to move on towards peace and prosperity for which they have made innumerable sacrifices.

An overwhelming majority of the people of Jammu and Kashmir recollect the courage and sacrifice of the Indian forces in 1947 with utmost respect and admiration. Across the state, including the Kashmir valley, events following the signing of the Instrument of Accession to India by the Maharaja of the state have been remembered by holding memorials and other functions. The bravery of those, both civilian and military, who fought to save Kashmir has been remembered.

This year even the deprived citizens of Pakistan Occupied Jammu and Kashmir (POJK) have mustered the courage to stand up to the oppressive Government of Pakistan. Residents of POJK observed October, 22, as a black day to mark the attack by Pakistani forces on undivided Jammu and Kashmir that led them to a life of colonial subjugation. The National Student Federation of POJK led a protest against the State of Pakistan for its brutal treatment of the people of the occupied territories.

It is no longer possible to mislead the people of Kashmir with fallacies and emotive stories based on misinformation and outright lies. The separatists, therefore, stand fully exposed for their opportunistic political posture. Everybody understands that their sole objective is to please their masters abroad. The people know full well that they are not worth anything more that disrupting normal life for personal gains.

The people are well aware of their past and quite sure about what they want in the future. The attempt by the separatists to declare October, 27, as a black day has boomeranged on them and has exposed their hollowness. It is hoped that Pakistan will also get the message.