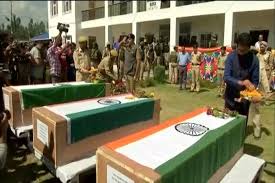 “Pakistan and India have an undeniably challenging relationship. We, however, owe it to our peoples, especially the future generations, to peacefully resolve all outstanding issues, including the Jammu and Kashmir dispute….,” wrote Imran Khan, Prime Minister of Pakistan to Prime Minister Narendra Modi on 20 September, even as reports came in about the killing and mutilation of Head Constable Narendra Singh of the Indian Border Security Force (BSF) by Pakistani troops on the International Border (IB) at Ramgarh, Samba in Jammu and Kashmir. One is left wondering as to what came first, this letter from the Pakistani prime minister or the barbaric handiwork of the Pakistan Army.

India, always quick to respond to such gestures, agreed to a meeting between the Foreign Ministers’ of the two nations on the sidelines of the 73rd United Nations General Assembly (UNGA) meet. The incident on the IB, however, led to the cancellation of the meeting with the same alacrity as it was accepted. So it is back to square one for India and Pakistan so far as diplomacy is concerned. No prizes to guess that the whole sordid affair has been engineered by the Inter Services Intelligence (ISI), the notorious dirty tricks department of the all powerful Pakistan army.

The ISI is not content with heating up the IB and the Line of Control (LOC). Close to the heels of the barbaric act at Samba came the abduction and killing of two Special Police Officers (SPO’s) and one Constable of Jammu and Kashmir Police by terrorists in District Shopian of Kashmir. The fact that they were killed only a day after the kidnapping is a clear pointer that the terrorists were waiting for instructions with regard to their disposal to come in from across the border.

Abduction and killing of security personnel belonging to Kashmir has emerged as a policy of the Pakistan based terror masters over the last six months or so. In August this year, a policeman was shot dead by terrorists outside an Eidgah in Kulgam’s Zazripora. Aurangzeb, an Indian soldier serving in Kashmir was abducted and killed by terrorists while he was going back home for the festival of Eid. On May 11, the bullet-ridden body of 23-year-old Lieutenant Ummer Fayaz was found in Shopian, south Kashmir, hours after he was abducted by militants from a wedding procession. Recently, some family members of serving police personnel were abducted but were released.

After having committed these barbaric crimes the terrorist are resorting to open threats to the serving police personnel through letters, pamphlets and other forms of media and telling them to “resign from their jobs or get ready for a bullet.”

About a decade back the terror masters operating from Kashmir, especially Syed Sallahuddin, chairman of the United Jihad Council, had decided to avoid causing damage to local Kashmiris’ and their families since such acts were giving a bad name to the terrorist movement which they wished to pass of as an internal uprising/insurgency, and also, since the acts were alienating the locals and as such adversely affecting the over ground support structure that is so important for sustenance of terrorism in the region.

The changeover to a policy of spreading fear among the locals has been made under direction of the ISI due to multiple reasons.

It is well known that Imran Khan has an obstinate streak which could prove dangerous for the Pakistan army’s policies. Hence, the action by the Pakistan Army to derail any initiative that he wishes to take towards peace with India. Something similar has been done earlier with strong prime ministers like Benazir Bhutto and Nawaz Sharif too.

On the ego front stands the humiliation that the Pakistan Army faced due to the surgical strike that was carried out by Indian troops on 29, September, 2016. It may be recalled that two years back, on 18, September, 2016, Pakistani terrorists carried out a cowardly attack on an Indian army establishment at Uri in the Kashmir Valley. The Indian Army responded within ten days, on the night of 28-29, September, 2016 and in a well conceived operation destroyed more than seven terrorist camps in the Pakistani side of the Line of Control (LOC) killing 38 terrorists and two Pakistani soldiers. No casualties were suffered by the Indian raiding parties.  The then Director General of Military Operations (DGMO) of the Indian Army, Lt. Gen. Ranbir Singh made a public announcement of the surgical strike having been carried out after informing his Pakistani counterpart of the same.

The Uri episode demonstrated the incompetence and inability of the Pakistan army to face its adversaries head-on. By resorting to such unholy means it shamed itself. Now, as the second anniversary of the surgical strike approaches the Pakistan army is sending out orders for the conduct of cowardly violence against innocents to offset the negativity that it will face.

The Pakistan army, in its desperation, is not realising that its new policy is cutting its own feet. The people of Kashmir are expressing their resentment on social media and other forums. They are openly denouncing the terrorist leaders like Reyaz Naiko as un-Islamic cowards whose killing of innocents in the name of Islam is totally unjustified. “The tears of the widows, orphans, mothers and sisters of the innocent policemen you have murdered will destroy you and your ego very soon,” says a Kashmir resident in a communication whose details cannot be shared due to reasons of security of the individual.

That the policy of the Pakistan army has failed miserably is evident from the intensity of the counter terrorist operations carried out in the last few days. Six terrorist have been despatched to hell in Bandipora while an intense search operation is underway in Pulwama to nab the cowards who killed the innocent and unarmed Police personnel. They will, undoubtedly, meet their just fate soon.

It is time for the Pakistan army and ISI to realise that its Kashmir policy lies in tatters and there is no scope for its sustenance. By spiking violence against the locals it is committing Hara-kiri. It would be best for the organisation to change tack, forget about Kashmir and allow its nation to pick up the threads of its shattered existence before it is too late.