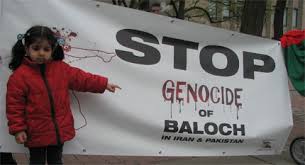 Balochistan, the most restive province of Pakistan, has entered into a new era of violence and dissent. Inputs regarding atrocities being committed on innocent civilians by the Pakistan Army and its sponsored terrorists are coming out frequently despite an attempt to keep the province under wraps.

The prevalent unrest, due to extreme poverty, instability and the systematic looting of natural wealth of the resource rich province, is being accentuated by the build up of the China Pakistan Economic Corridor (CPEC) that is looked upon as yet another attempt by the federal government to fully colonise the region.

Many incidents of extreme, brutal violence that have taken place in the last month in Balochistan. A suicide bombing on October, 5, at Fatehpur Dargah (shrine) in the Jhal Magsi area of the province has led to the death of more than 20 innocent people with many injured. The explosion took place at the entrance to the Dargah at a time when scores of people had gathered to pay their respects. Thursday was carefully selected for the attack since this day witnesses large crowds at the holy shrine. It is reported that the Islamic State has taken responsibility for this attack.

The region had not got over the suicide bombing when, on October, 9, unidentified armed men opened fire at a vehicle on Quetta‘s Kasi road leading to the killing of five people belonging to the ethnic Hazara Shia community.

Earlier, on September 11, at least four members the Shia Hazara community, including a 12-year-old boy, were killed and two others injured in an attack in the Kuchlak town near Quetta. The minority Hazara Shia community in Balochistan has been experiencing targeted killings for more than a decade.

The people residing within the restive province cannot get their anguish heard since the region is being kept behind the proverbial iron curtain by the government and the army. Media is almost non-existent and local protests are suppressed with an iron hand; local Baloch activists simply disappear from the face of the earth.

Under such circumstances, the responsibility to sentise the international community about the atrocities being committed over there falls on a small group of exiled expatriates who reside mostly in Europe. This group puts in all that it can for the sake of their land and their people.

Mir Suleman Dawood Jan, the 35th Khan of Kalat who is currently in self-exile has claimed that if referendum is being carried out in Balochistan over 90 percent of the locals will vote in favour of freedom. The Khanate of Kalat was a princely state that existed from 1666 to 1955 in the centre of modern day Balochistan before it was forcibly integrated into Pakistan by the Punjabi dominated Pakistan Army.

In late September this year a series of protests and events were held in Geneva by Baloch activists during the 36th Session of United Nations Human Rights Council (UNHRC) to expose Islamabad as a terror promoting state.

The protests are not restricted to Geneva alone! On October, 01, the Free Balochistan Movement, headed by Baloch national leader Hyrbyair Marri, staged a demonstration in Germany‘s Gottingen city against China and Pakistan’s collaboration over the ongoing Baloch genocide.

In Geneva, Abdul Nawaz Bugti, an activist of the Baloch Republican Party told the Indian news agency, ANI that Baloch activists have been consistently protesting outside the UN office and carrying out awareness rallies to garner attention of the international community and the UNHRC towards the ongoing human rights violations that are taking place in Balochistan and the atrocities that Pakistan is committing on daily basis.

“This genocide in Balochistan, if you look at the 20,000 killed in the last ten years, it is killing like almost six people every day. Extrajudicial killings continue with impunity, no courts, no records to law, no records to justice, their own constitution has been in abeyance in Balochistan. If there has been some reality to democracy then it has been in other parts of Pakistan – Sindh or Punjab. But, when it comes to Balochistan we have had military rule all over,” says Ahmar Mustikhan, a journalist and Baloch activist

This year the protests have been so strong that the Government of Pakistan has lodged a formal protest with the Swiss Government over the “Free Balochistan” posters that, it alleges, have come up across Switzerland. Pakistan Senate Chairman Mian Raza Rabbani suspended its Pakistan-Switzerland friendship group for an indefinite period due to this supposedly anti-Pakistan campaign in Switzerland. In fact, the Senate Chairman even called for the expulsion of the Ambassador of Switzerland to Pakistan.
The Baloch activists look upon this complaint as frustration on the part of Pakistan. They feel that the country is now resorting to diplomatic browbeating to quell their very legitimate protests. They also look upon this act as a sign of a weakening and worried Pakistan.

CPEC, the current biggest another existential challenge being faced by the people of Balochistan, has witnessed more and more Dissent. Voices are being raised against the human rights violations being committed to ensure successful implementation of the project. The fact that entire villages are being displaced and those protesting, including women and children, are simply disappearing is being highlighted.

Former Ambassador of Pakistan to United States, Husain Haqqani, has openly called for a reorganisation of the rights of the people of Pakistan, particularly the Baloch people, in order to address the injustices being committed in the name of the project.

Similar views about the Pakistan government ignoring the Baloch people in the evolution of the CPEC have been made by Asghar Khan Achakzai, President of the Balochistan Awami National Party. “The development process and all resources were being diverted towards Punjab,” he says quite emphatically.

India has, of late, been speaking up vigorously in favour of the Baloch independence movement. Prime Minister Narendra Modi set the pace with his speech from the ramparts of the Red Fort on Independence Day, 2016.

The forwards movement from there on, sadly, has been slow and laggard. The exiled Baloch leaders who are fighting for the cause of their land in foreign shores feel that the Indian government should whole heartedly support their cause.