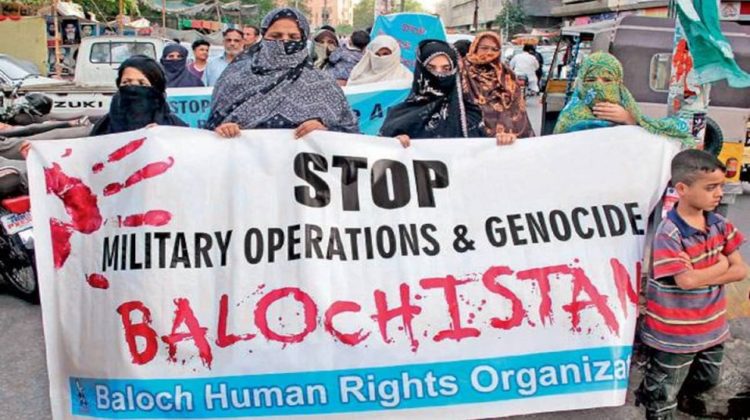 Balochistan and Sindh, the most restive provinces of Pakistan, have entered into a new era of violence and dissent. Inputs of atrocities being committed on innocent civilians by the federal government, thePakistan Army and its sponsored terrorists are coming out frequently despite an attempt to keep the situation under wraps.

The latest in the line of protests in Balochistan involves the port city of Gawadar. The city is the most important link to the China Pakistan Economic Corridor (CPEC) since it is from here that the expected l trade route through Pakistan and into landlocked Xinjiang Province of  China shall commence.

In the initial stages the protestors were demanding basic rights to support the “Gwadar Ko Haq Do” movement in the port city. They wanted the government to do away with unnecessary checkpoints  that disrupt normal life and make the people aliens in their own land. Other aspects involved provision of basic amenities like clean drinking water, schools, hospitals etc that are not coming up despite the development promised on the basis of CPEC.

In recent days the protests are against unlawful fishing by Chinese trawlers in Gwadar waters which is looked upon as a direct assault upon the livelihood of the local fishermen. Protesters are also claiming that this type of fishing is killing marine life and thus causing permanent and long term damage.

The situation has reinforced a perception of the people that the gains of CPEC will bypass them even as they are turned into a serf-like minority working for the benefit of the Chinese and Pakistan Punjab.

The people of Gawadar have protested before too, but the sheer scale of the protests this time has rattled the federal Government. Prime Minister Imran Khan has, after deploying additional forces in thousands to quell the protest, finally acquiesced and promised to  take action against what he has termed as “illegal fishing.” “I have taken notice of the very legitimate demands of the hardworking fishermen of Gwadar. Will be taking strong action against illegal fishing by trawlers and will also speak to CM Balochistan,” tweeted Imran Khan in an attempt to quell the agitation. The government also attempted to buy off the protestors by distributing money but the matter came into the public domain and has caused even more unrest.

The fact of the matter is that, for the first time, there is a protest in Balochistan that has shaken the Government of Pakistan. It is a harbinger of things to come as the time to operationalise CPEC gets closer. Pakistan’s Opposition leader in the National Assembly, Shahbaz Sharif, has described the protests as a “watershed event” in the struggle for basic rights. “An ongoing protest at Gwadar represents a new chapter in our country. Owned and led by people, it is a watershed event in the struggle for the basic rights guaranteed by the Constitution of Pakistan. I ask the Govt to listen to people’s voices and address their problems immediately,” tweeted Shehbaz Sharif.

Although the people of the port city called off their months long sit-in after talks with the government, it has become quite apparent that the people of Balochistan are unlikely to absorb the step-motherly treatment being meted out to them lying down, hence, the region will witness more turmoil in times to come. 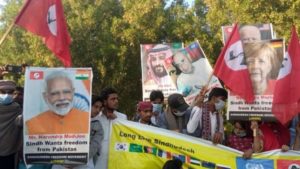 The situation is compelling international economic and rights bodies and think tanks to reassess the efficacy of CPEC. The International Forum for Rights and Security (IFFRAS) has said that the ongoing protests and terror attacks against CPEC are causing damage to both the project and to Pakistan. The think tank says that there has already been a decline in Chinese investment in Pakistan and that this would also be detrimental to future foreign investment in Pakistan thus causing further damage to Pakistan’s ailing economy.

The people of Sindh are also quite vocal in their protests. They too are convinced that under the garb of CPEC, the Punjabi and Pushtun dominated federal Government of Pakistan is bent upon placing both Sindh and Balochistan into the hands of China as occupied territories akin to the Shaksgam valley in Pakistan Occupied Jammu and Kashmir (POJK). The London based leader of the Muttahida Qaumi Movement (MQM) , Altaf Hussain, has stated that the atrocities of the Pakistan army personnel, especially the Rangers are on the rise in Sindh and the people are oppressed to an unacceptable degree.  “The army has control over Sindh’s resources, power, gas, oil, coal. We will take back each yard of Sindh land from the occupiers and free Sindh from the slavery of Punjab,” Hussain said. The Sindh province also faces problems of enforced disappearances and State-sponsored kidnappings for which people have been raising their voices.

Both Sindh and Balochistan have now joined hands in fighting against oppression by the Pakistani regime. Voices asking for an early intervention by India to rid them of the suppressive yolk are increasing by the day. Special appeals are being directed towards Prime Minister Narendra Modi to liberate Sindh and Balochistan in a manner similar to the liberation of East Pakistan five decades earlier.

It is well known that these provinces have never been made party to any development model of Pakistan. They have simply been looted of their resources and left beleaguered with the lowest possible quality of life. They were promised the moon on the basis of development through CPEC but have now realised that the project will, in fact, threaten their very existence, The development model of Pakistan is top down. Making Gawadar the next Dubai is nothing more than a pipe dream.

India will need to study the situation very carefully and respond in a manner that is righteous and meets the ends of human justice. The world too needs to take cognisance of the deteriorating situation and  respond appropriately. A coterie in Pakistan, on the basis of military strength, cannot be allowed to suppress two distinct and proud civilisations. Balochistan and Sindh need help, the world needs to come forward.

(Hardeep Bedi is a journalist and columnist)