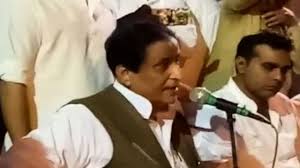 Azam Khan, the controversial leader of the Samajwadi Party (SP), has managed to surpass his own record of obtuseness by making a remark that has appalled the entire nation with its coarseness and insensitivity.

In a recent interaction with media he said that women are cutting away the private parts of soldiers because the latter are perceived to be rapists and violators.

Notwithstanding the widespread disgust that the comment has generated, it is “business as usual” for a person who has shown scant regard for civilised norms in the past too. Therefore, apart from condemning the remark, it is important to understand as to why Azam Khan says such things.

In this instance he was castigating the Bharatiya Janata Party (BJP) which is quite all right for a leader of an opposition party. What is astounding is that he suddenly digressed and started talking of soldiers raping women and women mutilating soldiers. This proves that filthy sexual thoughts remain central in his mind all the time. Azam Khan, therefore, is a sexual pervert!

The fact that he can talk in such an inconsiderate, cavalier manner about the much revered armed forces of the country indicates his feudal mindset, wherein, government officials are looked upon as no more than servants of politicians who can be abused at will. Azam Khan, thus, comes across not only as a sexual pervert but also a megalomaniac.

When confronted, Azam Khan attempted to skirt the issue by saying that he had spoken on the basis of such reports carried by the media. There has, of course, been no discourse of this nature in the media so Azam Khan, comes across as a cowardly liar who does not have the guts to stand by his statements.

One would expect a senior leader like Azam Khan to be well versed in national affairs. It is astounding to note that he does not know the basic difference between the security responsibilities of the Army, the Police and the paramilitary forces in the country. While referring to Indian Army soldiers he talks of their role in the Naxal hit areas of Jharkhand where the army has no presence whatsoever.

So we have in Azam Khan, a leader who is a pervert and a megalomaniac, feudal, cowardly, liar apart from being totally uneducated!!

With his latest comment, Azam Khan has shamed his party and his people.

He has shamed his party chief Mulayam Singh who, despite his failings, has been a proud Union Defence Minister who sent his son for education to a Sainik school. One cannot recollect a single instance when Mulayam Singh has said a word against the soldiers of the country.

Azam Khan has shamed his erstwhile chief minister by insinuating that the former has been educated in an institution which hic produces serial rapists.

He has shamed the women of the country by insinuating that they would do something as barbaric as cutting off the genitals of a dead man.

The list of his shaming is endless but we will stop here!!

What has to be seen with utmost concern is the effect that such statements would have on young minds that are susceptible to negative thoughts.  Those who indulge in barbarity in the name of religion may be a miniscule number but it is enough to disgrace the nation and they get justification for their immoral acts from the likes of Azam Khan..

So, is Azam Khan a perverted, coarse megalomaniac or an astute politician doing the bidding of countries like Pakistan? Is he, at the behest of our enemies, raking up a controversy and humiliating the armed forces to an extent that they rise in revolt? Such acts, after all, assist the agenda of our enemies to divide our great nation.

Azam Khan, therefore, may well be an enemy agent who has been tasked to abet mutiny, instigate a rebellion and promote enmity. It is only right that he has been charged on the aforementioned lines in two First Information Reports (FIR’s) lodged against him.

It is quite noticeable in recent times that failed politicians rake up security issues to gain publicity.

In Jammu and Kashmir, the moment there is some semblance of peace and normalcy, local political leaders of mainstream parties start seeking abrogation of the Armed Forces Special Powers Act (AFSPA) by terming it as draconian. When there is trouble these very leaders stay absolutely silent. This is playing politics wilt the forces all the way.

Now the trend has caught up with failed politicians across the country, the Congress calls the Army Goondas (Goons) the SP calls the army rapists and thus it goes on!

The reason behind this strategy is that the forces are a safe horse to flog since they do not retaliate. What is not being understood is that the forces need to retaliate only once and that would be quite sufficient to stop these shenanigans for all times to come. The political community would be well advised to find topics other than the Indian army and security forces to fight their political battles. These are the only institutions that hold the nation together and they should be allowed to maintain their apolitical sanctity.

In this disgusting instance, as usual, the Army has maintained a dignified silence. This does not absolve the state and the people from taking necessary action to curb such slanderous and unsubstantiated mudslinging against the noble force and all other security forces.

It is now up to the Samajwadi Party, Azam Khans family and the government to decide whether he needs to be sent to a mental asylum for psychological counselling or to jail for instigating a rebellion. He is eligible for both!