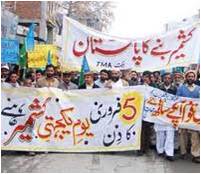 With the swearing in of Sardar Mohammad Yaqub Khan as President of the so-called “Azad Jammu and Kashmir” (AJK), which is more aptly termed as Pakistan Occupied Kashmir (POK), the ruling Pakistan People’s Party (PPP) has, in accordance with tradition, established its stranglehold on the region. Historically, it is always the ruling party, or a Pakistan Army sponsored party when the country is under military rule, which forms a government in POK. Recently, in a sham which passed off as elections, the PPP, predictably, established a majority in the legislative assembly and installed its senior member, Choudhary Abdul Majeed, as the Prime Minister. Sardar Muhammad Yaqub Khan, an erstwhile member of the All Party Hurriyat Conference, joined the PPP a little before the assembly elections and has been rewarded for his defection by being appointed the President of AJK alias POK. Thus the stranglehold is once again complete.

The newly appointed President has not taken too long to establish his intention to toe the PPP line despite being in an apolitical appointment. In his address after taking oath, he roundly condemned the arrest Ghulam Nabi Fai despite it having been established that Fai was involved in underhand lobbying sponsored by the ISI . He further said that his top priority would be the Kashmir issue as his ancestors had “liberated the territory of Azad Kashmir” and their mission has to be completed, so much for reconciliation.

A different version to the entire ballgame has been presented by Altaf Hussain, the exiled leader of the Muttahida Qaumi Movement (MQM), whose ”Mohajir” party members are being selectively targeted in the ongoing violence in Karachi. In a telephone conversation with Sardar Atique Ahmad Khan, an ex-Prime Minister of POK, the MQM chief said, “Everyone in Pakistan is aware of the fraud in the recent Azad Kashmir elections.” “The current government is authoritarian and not a democratic government,” he added.

In POK, every action of the civilians is scrutinised by the hawk-eyed army and the ISI. This is because the entire administration is in the hands of the Pakistani army. The army runs the schools, the water department, the power stations, and the transport. Mohammed Mumtaz Khan, a senior leader from Rawalakote has gone on record to state: ‘Pakistani army is using POK as a training camp for terrorists, as for development, the area lags behind Jammu & Kashmir by ages, where development had moved at almost the same pace as that of other cities in India.’ In POK, no freedom is granted to the media, in fact there is no media at all. Whatever public opinion is there gets squashed immediately. There is no way you can go out and hold a protest march since an action of this nature invites retaliation with firing by troops

The Human Rights Commission of Pakistan (HRPC) has opined that people in POK have suffered gross violations of their rights, from being continuously ‘watched and monitored’ by Pakistan’s ISI to denial of basic fundamental rights including access to judiciary and fair trial. As per HRPC ‘People feel that their and political rights have been infringed under the guise of the Maintenance of Public Order Ordinance, which prohibits activities that are prejudicial to public safety”.

The residents of POK lack a constitutional status in Pakistan even more so than the Mohajirs, the Balochis, the Pashtuns and the Sindhis who are now in open revolt against the government seen to be Punjabi (Army) dominant. Presently, there is no semblance of a Nation state in the geographic area which passes off as the Islamic Republic of Pakistan. In this turmoil the biggest victim are the people of POK and Northern Areas who are undergoing rampant colonisation. The recently held elections and the installation of the puppet government has laid the framework of continued exploitation in the long run.

Deep beneath the layer of deceit and blatant opportunism that has enveloped POK since the last six plus decades there is a very palpable disgust for Pakistan. Many in POK, including its large Diaspora in the United Kingdom and other parts of the world, find India’s handling of its part of Kashmir more commendable. There is a growing awareness that while India has respected Kashmir’s age-old practice of not allowing outsiders to settle down in the valley, Pakistan has allowed over 28,000 Afghan families to settle down and fleece the local populace in the name of Jihad. With regard to socio-economic parameters everyone is aware that Kashmiri’s in the valley are better educated and better skilled due to the better education facilities that are available to them. On the political front, India has held fair elections in the Valley right down to the Panchayat level while the Pakistani government not only indulges of gross manipulation of elections, it also has the gumption of dismissing installed governments at will.

Azad Kashmir is neither inhabited largely by Kashmiris nor is it Azad. There are voices of protest coming up; those actively involved in this crusade to obtain justice are Shabir Choudhry’s Jammu and Kashmir Liberation Front, Abdul Hamid Khan’s Balawaristan National Front, All Party National Alliance, Karakoram National Movement, Karakoram Students Organization and Afro-Asian Peoples Solidarity Organization and many others. These political organisations have, time and again, reiterated their demand for empowering the people of POK and Northern Areas to decide their future both political and economic outside the Islamic Republic of Pakistan. The time has arrived for the world, led by India, to intervene in this highly oppressed region and pressurise the government of Pakistan to pay cognisance to the just demands of the people.