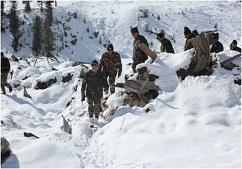 This winter, the Kashmir valley has witnessed an unusually high degree of nature’s wrath. It has been hit by a spate of avalanches in the last few weeks especially so in Gurez and Sonamarg, leading to loss of life, communication breakdowns, and many other hardships. It is the Army units posted in these remote areas who have faced the brunt of this huge natural calamity.

An avalanche at Dawar village of Gurez, District Bandipora, on February, 23, hit a brigade headquarter of the Army. This area, near the Line of control (LoC) is militarily sensitive and troops here maintain on constant vigil regardless of the weather conditions. These brave soldiers were on duty at posts which came under 18 feet of snow. 29 soldiers were reported trapped under the avalanche that damaged around 25 vehicles and 17 barracks of the Army. Initially, 13 dead bodies were recovered and an equal numbers of personnel rescued. Yet another avalanche at Sonamarg, District Ganderbal, took the life of three more army personnel.

Undeterred by its personal loss, the army launched a massive operation to locate and rescue two persons of the Sonamarg Development Authority (SDA) and seven villagers of Shitkari village who were trapped under a bridge near Sonamarg. Army Helicopters were sent to trace out the persons followed by specialist troops on foot and skies to get them out. As winching of nine people was not possible, the officer-in- charge of the rescue operation, Major Khati, prepared a make shift helipad by beating snow, where a helicopter landed to rescue the persons in three sorties. These rescued people had been without food and water for 48 hours and their village was buried under 12 feet of snow. On February, 25, the Indian Air Force also joined the rescue operation by airlifting 11 civilians from Sonamarg who had been trapped for four days. In yet another humanitarian gesture on February, 26, the Army saved the life of a 75-year Samad Sheikh of village Thali along the LoC in Macchil, District Kupwara, who had suffered a heart attack. Sheikh was given emergency medical treatment by Army Doctors and then flown out to Srinagar in an Army Helicopter.

The effort to get tide over the calamity is going on but what, under the circumstances, is of significance is the national response to this huge tragedy. In all such instances the first response should come from the political leadership and the government. Undoubtedly, the Union Defence Minister AK Antony and the Governor of J&K, NN Vohra, have expressed grief over the loss of life. “My thoughts are with the near and dear ones of the deceased in this hour of tragedy”, said the Defence Minister while wishing a speedy recovery to those injured and assuring relief and rehabilitation for the affected families. However, the Chief Minister of Jammu and Kashmir, Omar Abdullah, who was expected to be deeply involved in the complete crisis, could only find some time to tweet his feelings. “Heartfelt condolences to the families of those soldiers who lost their loved ones in the avalanches today (in) Kashmir,” Omar wrote on the social networking site, Twitter. Omar, is seems, believes that humanity is restricted to the world of Twitter. For good measure he added that he would be “sending a Minister” with a personal message of condolence to General Officer Commanding, 15 Corps. Since when has the tradition of sending condolences by proxy started in India? True to form, leaders of the PDP, Hurriyat etc did not deem it necessary to even mention the issue in passing, which is not very surprising since nothing better can be expected from them. Surprisingly, even parties like the BJP, Panthers Party etc, who are normally quite forthcoming in such times of distress, have been unresponsive.

The response of the media has been even more cold and aloof. Kashmir based newspapers, which should have been totally proactive in reporting the happenings, carried only details which were provided by Army press releases. Jammu based newspapers, of course, carried details of the rescue operations, the names of the deceased soldiers etc. This clearly indicates the sectarian divide that plagues media in Jammu and Kashmir. The national media has given no more than lip service to the tragedy; small snippets are all that this calamity could garner from our national dailies and news channels. Media failed to carry stories of heroism against heavy odds, odes to those soldiers who fell in the line of duty, word of support for the people of Kashmir, support being provided by the Army to the people of Kashmir and other suchlike important stories. The tragedy has not elicited any media generated debate on steps that can be taken to reduce such risks to the lives of the soldiers in future.

The end result of this abjuring of responsibility by the political leadership and the media is that the nation remains ignorant about the level of suffering of both soldiers and civilians in those areas of J&K which are reeling under a natural calamity. The people of the country are not being able to visualize the difficulties that their soldiers are facing in performance of their duties. They are feeling no sense of pride for those soldiers who refused to vacate their vigil despite avalanche warnings by the Snow and Avalanche Study Establishment

A sense of nationalism cannot be generated by lip service alone. It is during times like this that those vested with social responsibility are expected to stand up and be counted. The sacrifice of the soldiers who died due to the avalanche is, by no means less, less than attaining martyrdom while fighting the enemy. It is time that the Nation learns to respect its fallen heroes.