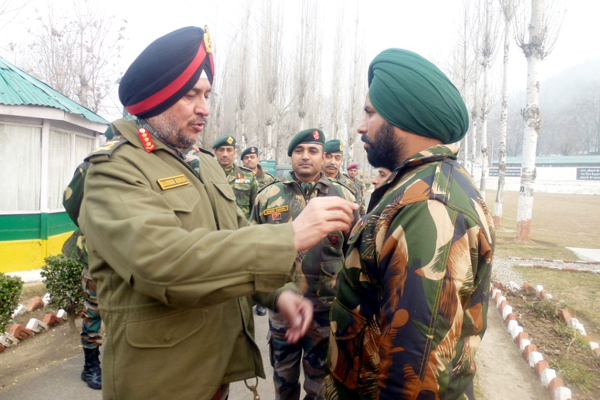 Lt General Ranbir Singh, Army Commander of the iconic Northern Command since 1 June, 2018 will superannuate from military service on 31, January, 2020. He will be sorely missed by the rank and file of the command since, throughout his tenure, he has spent maximum time with the troops operating in remote areas. He will be remembered by the other security forces, political and bureaucratic establishments for the seamless synergy and confidence he instilled between organisations. Most significantly, he will be missed by the common man who felt safe under his watch.

Lt General Ranbir Singh has had a distinguished career. Apart from commanding sensitive formations and serving overseas with the United Nations, he had extensive tenures in the Directorate General of Military Operations (DGMO) and instructional institutions. He has, thus, developed considerable expertise in counter insurgency operations, operational art and information operations. It is for this reason that he was specially chosen to head the Northern Command.

The Northern Command encompasses varied terrain from the icy glaciers of Siachen to the plains of Akhnoor. It also has the unique distinction of guarding four different types of borders – the Line of Actual Control (LAC) and Actual Ground Position Line (AGPL) with China and the Line of Control (LOC) and International Border with Pakistan. Each one of these boundaries comes with a separate politico-military perspective which poses a very big leadership challenge.

When the General took over Northern Command the after effect of the Surgical Strike carried out by Indian troops on 29, September, 2018, was still palpable. Pakistan was nursing a bruised ego and added to this was the fact that the General was a principle planner of the strikes. Seething in anger, Pakistan definitely looked for revenge and retribution. The General completely disregarded the pressure.

Lt General Ranbir Singh was mandated by the government to rid the region of the menace of cross border terrorism and was given a free hand to do so.  He used the free hand in full measure to fulfil the mandate.

Sustained counter-terrorist operations became the norm in his command. Cowardly attempts by the enemy to instigate civilians towards disruption of the operations did not make the forces relent from their objective. They, instead, formulated good operating procedures for crowd control that worked well. Meticulous planning, synergetic effort, excellent intelligence gathering and a host of other coordination aspects combined with good leadership played a big role in the conduct of successful operations and a virtual wipe out of terrorism.

In September, 2018, Pakistan Army Chief said that the country would launch ten surgical strikes if India launches one.  General Ranbir Singh dealt with the cowardly threat with disdain.  “It doesn’t really matter what statements are made from which quarter, it is important for us to retain and refine our capabilities and be prepared for any contingencies at all times,” he said while adding that the Army continues to be a “potent, responsible and accountable instrument of national power.”

A big security challenge came up on November, 01, 2018 with the dastardly murder of a Bharatiya Janata Party (BJP) leader, Anil Parihar, in Kishtwar. The killing immediately raised fear of a revival of terrorism in the area that has remained peaceful for decades. The assistance of the army to contain a potentially explosive situation was solicited. Lt General Ranbir Singh immediately visited Kishtwar and carried out a detailed assessment along with the civil administration. He complimented the solidarity among the communities while offering condolences to the bereaved families. “There have been reports of activities of terrorists in the south of Pir Panjal but these are isolated incidents and we have been able to check and arrest any kind of movement in the region. People of the area know the dividends of peace in the area and have helped the army in keeping it this way. I want to thank people for this as well,” he said. Thus, the situation was restored with great patience and maturity.

Lt General Ranbir Singh gave considerable thrust to “Winning Hearts and Minds” (WHAM). Primary among his concerns was weaning away of youth joining militancy. The initiatives taken by Governor Satya Pal Malik in this direction elicited complete support from the Army. Initiatives like the Super-40 designed to prepare students for competitive examinations, many sports competitions and Hunar-e-Kashmir Youth Festival organised by the Srinagar based Chinar Corps witnessed path breaking results. The Army Commander made it a point to interact with many young boys and girls of Kashmir, particularly those who had achieved laurels after being trained by the Army. The end result has been a perceptible decline in the recruitment into terrorism.

The Army under General Singh paid particular attention to the Line of Control (LOC) by augmenting the fencing with smart technology and further strengthening it physically. The effort accrued excellent results in neutralising of infiltrating terrorists. Now, the number of foreign terrorists operating in Kashmir is at an all time low. Local recruits were left without weapons, ammunition and equipment.

A monumental security crisis came up in Mid-February 2019 in the form of a terrorist attack on a CRPF convoy in Pulwama, Kashmir. India responded within a few days with aerial strikes on a terrorist camp at Balakot, deep in Pakistani territory. The camp was razed to the ground and hundreds of terrorists killed. The strike was followed by an aerial dog fight the next day in which an India pilot, Wing Commander Abhinandan, was taken prisoner. He was returned in a few days time. Even as the return of the Wing Commander was underway, heavy firing was reported all along the LOC which led to some civilian casualties. Pakistan had chosen not to relent. The Indian Army, under Lt. General Ranbir Singh, ensured that the fallout (external as well as internal) was managed well.

The general elections in May 2019 saw the NDA Government returning with a decisive majority. Lt General Ranbir Singh reiterated the commitment of the force towards discharge of its constitutional responsibilities. “Indian Army remains committed to be able to take on any challenge as far as external threats are concerned and similarly take on any internal disturbances when called upon to do so….” he said in May 2019.  To Pakistan he sent another firm message, “They dare not try and come anywhere near the line of control to carry out any kind of action. Our deterrence and articulation of our military strategy is very clear. Should there be any misadventure by Pakistan, they will be given a befitting reply.”

The changing political narrative necessitated a state of high alert. Lt General Ranbir Singh called a meeting of the security core group that comprises heads of all security forces operating in the region. He highlighted Pakistan’s initiation of ceasefire violations, pushing of infiltrators across the LoC, calibrating of terrorist actions in the hinterland and exploiting of social media to launch disinformation campaign in J&K . He noted that the Indian Army had given a befitting response in thwarting these nefarious designs of the enemy. He urged the people not to fall prey to the enemy’s evil designs to poison their minds with incessant propaganda and exhorted them not to proliferate or indulge in rumour mongering. He warned Pakistan Army against continuing with a disruptive course.  All through the period of transition from statehood to Union Territory, the Security Forces have remained firmly in control of the situation and ensured peace and security.

With regards to the China, the Army Commander ensured peace and tranquillity with development of mechanisms of confidence building to ensure that there are no friction points. If friction came by  it was not allowed to escalate. Things have remained quite stable on the Chinese front.

The sterling, passionate and selfless service to the nation given by Lt General Ranbir Singh, especially so in Jammu and Kashmir as Army Commander Northern  Command, which also marks his last tenure in a long and distinguished service, deserved the highest approbation and respect. His steely determination hidden under a calm and affable demeanour will be remembered in times to come.

While wishing Au Revoir’ and God Speed to the General, the Northern Command cannot spare even a moment of respite since the enemy is ever vigilant for a weakness to show up and be exploited. Undoubtedly, General Ranbir Singh will leave the Command in some very capable hands.

(Jaibans Singh is a reputed writer, columnist and commentator)