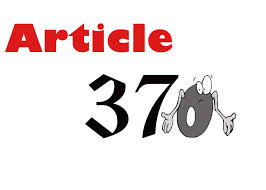 Dr Jitendra Singh, member of parliament from Udhampur, Jammu and Kashmir and Minister of State, Prime Minister’s Office and Department of Personnel and Training (DoPT), during his interaction with the media on taking charge of DoPT referred to Article 370 of the constitution that gives special status to the state of Jammu and Kashmir. His comment evoked a sharp response from the state parties, the ruling National Conference (NC) and opposition Peoples Democratic Party (PDP), to create an avoidable controversy.

The matter has since been hotly debated on television and has been written about in newspapers and websites. The overwhelming opinion is that there is absolutely no harm in debating and discussing the status of Article 370.

While accepting this overwhelming opinion it becomes necessary to put in perspective the unduly stringent response of the regional parties. Chief Minister Omar Abdullah, who should have exhibited maturity and restraint went hyper on his twitter handle and made a series of harsh remarks. A particularly offensive tweet sent out by him says, “Mark my words & save this tweet- long after Modi Govt is a distant memory J&K won’t be part of India or art 370 will still exist.” By taking a posture of this nature the Chief Minister has simply made known his inflexibility in the matter at hand. The PDP joined the fray by labelling the remark of Dr Jitendra Singh as “disruptive” and called upon the Prime Minister’s Office to clarify the statement to “reassure the people of Jammu and Kashmir that no mischief is on the way.” Pray what is so mischievous in looking for a debate on an issue that affects the people of the State? In case the NC and the PDP are so convinced about the aspiration for the people of Jammu and Kashmir to exist in perpetuity under the ambit of Article 370 then why are they so scared of opening the issue to debate and discussion? Does one get the whiff of a vested interest here?

Omar Abdullah says that Article 370 provides the constitutional link between the Union of India and the state of Jammu and Kashmir. Many legal luminaries and prominent citizens of the state, on the other hand, are convinced that Article 370 was set up as a temporary measure to implement the Indian Constitution fully in Jammu and Kashmir. This line of thought logically concludes that Article 370 should have been repealed within six months after having completed the constitutional obligation. The country is already behind time by six plus decades in this regard!

Many look upon the inability to do away with Article 370 as a failure of the political leadership at both the centre and the state level. The economic and political loss that the people of the state suffer due to continuation of the article far outweighs the preferential treatment that it assures. The common man in Jammu and Kashmir is convinced of not having benefited in any manner by the continuation of the statute in Jammu and Kashmir; the preferential treatment is limited to the crony circle of the family based feudal leadership that controls politics in the state, this forms the basis of the vested interest.

As things stand there are so many national schemes that cannot be extended to the state due to the limitations posed Article 370. Business suffers because people from the rest of the country cannot establish infrastructure in the state. The socio-psychological divide created by the statute negates integration of the youth of the state in other parts of the country. The state is not accountable to the Nation despite looking for assistance all the time. These are only a few examples of many ways in which Article 370 negatively impacts the life of a common man in Jammu and Kashmir. The objective of every law and statute is betterment of the people; if such betterment is not coming by, then legality cannot be quoted as a reason for continuing with it.

There is a wide spread perception that those who misused the law and the constitutional situation to establish a feudal cult in the state of Jammu and Kashmir are now worried about their future as a more representative and aware character is seen to be emerging. When seen in this context the reaction of both NC and PDP reflects the insecurity that they harbour on the subject. There are many who agree that the stringent reaction by Chief Minister Omar Abdullah was directed more towards the forthcoming assembly elections than any justified or righteous posture on the subject. The PDP, of course, was left with no option but to follow the line set by the NC.

There are many who hold views on Article 370 similar to those articulated by Dr Jitendra Singh; he was, therefore, simply giving voice to a popular perception. Many including this columnist had already predicted that any attempt to talk about the Article will draw the ire of the regional political parties and cause turmoil in Kashmir. The NC and the PDP have stood up to the prediction by creating a storm in the teacup on the basis of an innocuous comment made by a junior minister of the newly inducted government at the centre. This is the harbinger of things to come; any move towards even a debate on the subject will lead to engineering of unprecedented turmoil in the Kashmir valley. If the valley erupts during this summer on the issue of Article 370 the responsibility will rest squarely on the shoulders of the Chief Minister.

There is a need for the political establishment in Jammu and Kashmir to realise that ultimately it is the will of the people that has to prevail and this can happen only through debate and discussion. It serves no purpose to air personal views as those of the masses. It is best to allow a democratic political process to bring about a mandate.