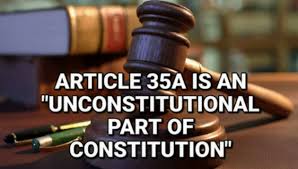 Jammu and Kashmir witnessed considerable political activity in the wake of the scheduled hearing of petitions challenging the constitutional validity of Article 35A by a three member bench of the Supreme Court on August, 06. The separatists called for mass agitations and hinted at bloodshed in case the constitutional provision was tampered with. The Kashmir based mainstream parties were not too far behind in their belligerent rhetoric.

All of this happened when there was no indication of the Supreme Court giving a verdict in the case. The hearing, which has since been adjourned to end August, was designed to study the need to refer the case to a five Judge Constitutional Bench. Despite this, the political leaders did not hesitate to spread a wave of insecurity, mistrust and dissension in a manner that can be perceived to be secessionist.

It can be expected that a similar divisive and misinformed political narrative will be brought up once again when the case comes up for hearing. It would be worthwhile to understand and visualise as to what would happen in case Article 35A and even Article 370 are abrogated.

The biggest argument being given out by the Valley leaders is that the abrogation would open floodgates of migration into the valley in a manner that would change the demographic pattern of the region. It is really astonishing to perceive that the people of Kashmir are being taken in by this infantile argument. Jammu and Kashmir comprises of three distinct regions and multi-ethnic, multi-cultural population. All those holding “Permanent Resident Status” are well within their rights to buy land and property in Kashmir. Not one person from Jammu and Ladakh has availed of this facility! Under the circumstances who from the rest of Indian would migrate to Kashmir? Inversely many Kashmiri Muslims are known to exercise their permanent resident status to buy land in Jammu.

It is, in fact, the Jammu region which has the danger of being overwhelmed by migration! It has already absorbed the West Pakistan refugees, the “permanent residents” who migrated from Pakistan Occupied Kashmir (POK) and later from the Kashmir Valley (Kashmiri Pundits). As is well known, the exodus of Kashmir Pundits took place in the 1980s, well after the partition, due to unmitigated ethic violence perpetrated against them.

The Jammu region is now beset with yet another refugee problem of critical dimensions due to the unprecedented influx of Rohingya refugees which the government has been unable to curtail.

The demographic changes that the so-called leaders of Kashmir keep talking about are fast becoming a reality in Jammu and neither Article 370 nor Article 35A provide any respite from the same. The pressure on the Jammu region is something that the governments at the central and state level need to address with utmost concern.

The basic fault line that Article 370 and 35A have elicited is the uneven distribution of constituencies. Sheikh Abdullah assisted by his brutal majority engineered that warped formation of constituencies which favoured the Kashmir Valley and left Jammu and Ladakh region bereft of a political status commensurate to their geographic and demographic strength.

Jammu has a bigger area and equal population as compared to the Kashmir Valley and Ladakh has a bigger area than both Jammu and Kashmir, yet, the legislative constituencies are such that maximum strength in the legislative assembly comes from the Kashmir Valley. Successive Kashmir centric governments are steamrolling all efforts to carry out a long overdue delimitation of the constituencies and this is being done under protection of Article 35A and Article 370. The perfectly legitimate exercise of delimitation and restructuring of political constituencies has been deferred to 2026 which is totally unacceptable.

The reason behind this stalling of an essential democratic process is obvious!! Constituencies more in tune with the existing geographic and demographic realities of the state would break the stranglehold that the political leadership of the Kashmir Valley presently enjoys on the political spectrum of the state. Once the constituencies are rationalised there will be no threat of political domination by a particular community and the fear of migration and change in demographic patterns will also subside. It is in this aspect that the revocation of Article 370 and Article 35A becomes critical for the state.

There are many benefits that the people of India enjoy due to development initiatives of the central government that are denied to the people of Jammu and Kashmir due to restrictive legislations like Article 35A and Article 370. A good example is of Other Backward Classes (OBCs) who get 27 percent reservation in the whole of India except the state of Jammu and Kashmir where they have not even been identified because the empowering legislation has not been extended to the state. Article 35A and Article 370 have stalled development, negatively impacted important parameters like health and education and restricted political empowerment at the grass roots level of Sarpanches and Panches. Even now there is resistance from the Kashmiri quarters to the upcoming Panchayat elections because vested interests over there do not want power to go down to the grass roots.

The few families of Kashmir who benefit from the stranglehold that the legislations provide are fighting tooth and nail for their continuance by keeping the people in the dark about the legal, political and social implications.

Now is the time to open up the debate on the constitutional status of Jammu and Kashmir rather than pass threats of civil disorder. To put it simply, if 28 states and seven Union territories can exist happily within the Indian Union and enjoy the democracy and freedom being provided by its constitution without recourse to Article 370 and Article 35A there is no reason for the 29th state, Jammu and Kashmir to try and coexist differently.

In case the Supreme Court upholds prayer of the petitioners and calls for removal of Article 35A due to its unconstitutional nature the government at the central and the state level would be bound to uphold the verdict and at the same time stay sensitive to the senses of insecurity that has enveloped the Jammu region and its people.

(Jaibans Singh is a reputed analyst, author and speaker)