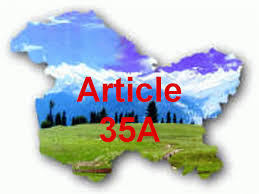 A three Judge bench of the Supreme Court is slated to hear a petition on the legal validity of Article 35A of the Constitution on August, 6. This would be part of an ongoing hearing of four petitions on the constitutional status of the article that have been clubbed together. During this hearing, the plea for institution of a five Judge Constitution Bench for the case is likely to come up for consideration. “That (reference of the petitions to a Constitution Bench) we will see…..we will examine,” is what Chief Justice Dipak Mishra had said in response to the plea in the last hearing.

The case is not likely to come up for any decision in the August, 6 hearing, yet, a lot of political churning is ongoing in the Kashmir Valley. Mirwaiz Umar Farooq, Chairman of the Hurriyat, has called for a mass agitation in case Article 35A is “tinkered with” by the Supreme Court. “No attempt will be tolerated to change the disputed nature and demographic character of Jammu and Kashmir,” he tweeted. The Hurriyat leadership also held a meeting on the subject in the residence of Syed Ali Shah Geelani. Those present included the Mirwaiz and JKLF chief, Yasin Malik. That a meeting of this nature was held in the residence of the hawk Geelani is an indication of the rigid posture that will be taken on the issue by the separatists.

Mehbooba Mufti has been a long time crusader for continuation of Article 35A. “If special rights and privileges to the people of Jammu and Kashmir are tinkered with, then there would be no one in the state to hold the tricolour,” she said about a year back.  Since her ouster from the post of chief minister she has been actively canvassing on this particular subject with the separatists. The ongoing propagandist mobilisation is undoubtedly a result of this joining of hands.

A particular elitist, anti-national leadership of the Kashmir Valley is engineering open dissension against a verdict of the Apex Court of the country if the same does not favour its vested interest. Its open threats are designed to intimidate the Court and the central government and thus scuttle dispensation of justice. Such an attitude is absolutely intolerable.

The honourable Court and the government, on the other hand, are exercising utmost sagacity in dealing with the sensitive issue. On May, 14, the Supreme Court deferred the hearing of the case saying that the Government appointed interlocutor, Dineshwar Sharma, is making efforts to find a solution to the sensitive issue and, as such, passing of an interim order would be counterproductive. The Union Government has, on its part, decided not to file a counter affidavit in order to leave the Apex Court free to decide on what is essentially interpretation of the law and the Constitution.

Article 35A enables the State Assembly to define ‘Permanent Residents’ and to give them special rights and privileges, as well as to restrict the rights and privileges of all citizens of India who do not fit into this definition of ‘permanent resident’. This Article has denied certain basic rights to many communities living within Jammu and Kashmir for the past six decades. It has also taken away the rights of all Indians living outside Jammu and Kashmir from settling in the state which is an integral part of India. One of the four petitions argues that Article 35A goes against the “very spirit of oneness of India” as it creates a “class within a class of Indian citizens.”

It is on the basis of Article 35A that the female residents of Jammu and Kashmir are denied transfer of property to their wards and husbands if they marry a “non-state subject” (a person who is not permanent resident of the state). The second petition of the case has been filed by a female resident of the state, Charu Wali Khanna, to plead that Article 35A discriminates against a woman’s right to property. It is notable here that, a Jammu and Kashmir High Court judgment taken after a deep study of the original State Subject definition given on April 20, 1927, during the reign of Maharaja Hari Singh, has declared that there was nothing in these notifications that was gender discriminatory.

On the basis of the foregoing it has been pleaded that as a result of the implementation of Article 35A, lakhs of Indian citizens have been deprived of “justice, social, economic and political” and “Equality of status and of opportunity.”

The Supreme Court has the competence to adjudicate the case! Why then is a segment of the Kashmiri leadership taking such desperate and violent measures to ensure that the verdict is not in favour of removal of the Article from the Constitution? The reason is twofold! The first is to use the opportunity to create panic, divisiveness and disruption in the Kashmir Valley that has seen relative peace and calm since the institution of Governors rule.  The second and more important is the realisation that the petitioners in favour of removal of Article 35A have a strong case which the Apex Court may be obliged to accept and hence the need to create a public hysteria to manipulate the verdict of the Court.

The people of Jammu and Kashmir should not fall into the trap being set by those self serving leaders who do not have their interest in mind. They should allow the Court to decide what is best for them.