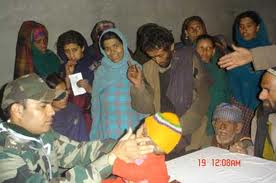 Winters are a very harsh and testing time for the people of Kashmir. The extreme cold conditions lead to general sickness and many emergency medical cases for which medical aid is not easily available. The situation is even more critical in remote areas of the valley that are cut off due to heavy snowfall. The army in Kashmir is well aware of these problems and prepares its medical assistance plan for the civilian general public well in advance and very meticulously. The first stage is holding of medical camps under the humanitarian and development oriented scheme – Operation Sadbhavna, before the onset of winter. In these camps, held across the valley but extensively in remote areas, a general round-up of the health of the locals is taken and those needing special care are advised, assisted and helped. Apart from the medical check-up, classes are held to educate the locals about health problems that they are likely to face during the winter and the steps required to be taken to avoid the same. Stocking of medicines is done. Army medical officers visit areas in their unit responsibility to see that everything is all right. Medical camps are held regularly all through the winter and medicine is disbursed free of cost. There are standard operating procedures in place to carry out medical evacuation of emergency cases both by road and by air. Fully equipped Army ambulances and other vehicles are utilised for this purpose; air evacuation is done by requisitioning Air Force helicopters, mostly MI-8.

In a recent incident reported on January, 12, 2014, the Air force, on the request of the army, arranged for the airlifting of a pregnant woman, Khurseeda Begum, wife of Mohammad Ashraf form the remote cut-off village Dawar in Gurez, Bandipura. The six months pregnant Khurseeda was developing complications and a request for her air evacuation raised by the Brigade headquarters in Dawar was instantly responded to by the Air Force by sending a helicopter (MI-8) for the medical evacuation. Three other patients were also air lifted, leading to life saving treatment.

Over the years, many mothers and children across the Kashmir valley have benefitted from such humanitarian acts by the armed forces of the nation. The entire initiative is undertaken in view of the geographic sensitivity of the remote areas where local administration finds it difficult to operate under extreme weather conditions. The armed forces lend a hand since they are available in close proximity and have the means to do so. The biggest gratitude comes in the form of the happy faces of the mother and child. In many cases the child is adopted by the local units and looked after for years on end, such is the bond that develops.

Against this backdrop, the hue and cry raised about alleged insensitive handling of a pregnant women by the security forces (Army and Police personnel) at Kukroosa, Kupwara, North Kashmir on January, 09, 2014, is both surprising and hurtful.

Sehzad Ahmed Mir, resident of Village Zafar Khani and his pregnant wife Asiya Jan went through a harrowing experience of their child being born on the roadside, with the help of local women, because the Primary Health Centre (PHC) to which the lady was taken was locked since the staff was not available on duty. In their statement to the press the said that while on their way to the PHC they were stopped by the security forces that were conducting an anti-terrorist operation in the area but in view of the condition of the lady they were allowed to proceed to the PHC. The actual delay took place in the PHC where the doctors did not arrive till 1 PM. What is quite surprising is that the doctors have been trying to take shelter for their outright wrongdoing by insisting that they were delayed due to the cordon. The chief medical officer of Kupwara, Dr Aleem, has gone on record to state, “Our paramedical team, doctors and other staff were stopped by the army and the police. They were allowed (to proceed to the health facility) only after I talked to the police and army authorities.”

The security forces however, have an entirely different version to the incident. They state that the cordon was in place as early as 8 AM and vehicles of civilians and government officials employed in emergency duties had been permitted to move through. Zafar Khani, the village of the couple is about three kms away from Kukroosa where the cordon had been laid, hence the question of delaying the couple does not arise. In fact, on realising the gravity of the situation, the army facilitated move of a local midwife from adjoining Kalipura Mohalla to provide necessary assistance in child birth. The doctor of the PHC was also contacted but due to the distances involved and adverse road conditions he could reach only after two hours and by that time the delivery had taken place. The crowd that had collected at the site of the incident became belligerent towards the medical team and it was the presence of the security forces that ensured that they came to no harm.

Spread of misinformation leads to disruption of normal life in the Kashmir valley, hence, it is important that facts are presented in the right perspective. Any fault o on the part of the security forces should lead to suitable modification in their standard operating procedure. Traffic and crowd management during anti-terrorist operations should be the responsibility of the state police and not the Army.

Whatever insinuations are levelled against the forces cannot wish away the fact that the medical team of the PHC was not in its place of duty. This lapse needs to be tackled by the state government with utmost seriousness. The government of Jammu and Kashmir had ordered a time bound enquiry into the incident bit no intimation of the progress is available. One cannot help but get an impression that a process is on to shield the culprits after all sorts of accusation had been levelled against the security forces, in particular the Indian Army.