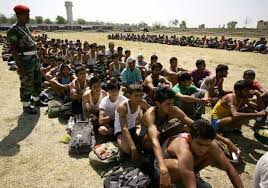 There is a highly vocal element in the political landscape of Jammu and Kashmir whose single point agenda is to project the state as one facing oppressions. The security forces are painted as the biggest culprits.

An inherent contradiction in this line of thought becomes visible when recruitment rallies held by these very security forces, especially the Indian Army, witness a massive response from the youth of the state.

Army recruitment rallies attract thousands of young boys of the State, especially from the Kashmir Valley. Among them are also such young men are known to have indulged in stone pelting against the very forces that they are so keen to join.

The youth of Kashmir particularly opt for recruitment in the Jammu Kashmir Light Infantry (JAK LI) regiment which comprises of soldiers from the state of Jammu and Kashmir with an intake of 50 percent Muslim strength. The JAK LI Centre in the Kashmir valley is always packed to capacity. Presently, it has 984 recruits under training while 963 have passed out in this year and 914 are expected to pass out next year.

In the current year, recruitment rallies conducted by the Territorial Army witnessed a massive attendance of one lakh thirty three thousand candidates of which 1606 were selected and 1416 finally joined.

In the Jammu region the rallies held by the Army Recruitment Office witnessed attendance by about fifty thousand candidates of which 7335 were selected ad 1781 ultimately joined. Reasons for not joining are mostly incomplete documentation and medical issues.

Overwhelmed by the response over the years, the Army has increased the intake in service from Kashmir and has also increased the number of rallies being held.

The Indian army has also increased the number of Territorial Army (Home and Hearth) [TA (H&H)] to meet this burgeoning demand. TA (H&H) battalions comprise exclusively of youth from the state. Troops enrolled normally operate in the area where they belong. Minimum education level is eight standard and age limit is 25 years and below.  Ex-servicemen, Ex-STF/SPO and surrendered militants are also enrolled in these battalions.  Recruitment for TA (H&H) has been done from terrorist infested regions.  This provides for a large cross-section of people to avail the opportunity.

The response, that is quite visible, is a clear indicator of the desire of the Kashmir youth to opt for peace and progress. Those who came for recruitment include many graduates and even post graduates. They are aware that their families may be targeted by the terrorists, yet, they take the risk to earn a livelihood and also serve their country.

The troops of TA (H&H) put their heart and soul in their work. The output of the TA units has been much beyond expectations.  The loyalty and dedication of the TA soldier is fast becoming a role model for the youth of the region.

The Army fully understands the desire of the youth to join its rank, for which reason it has started recruitment training in many places across the Kashmir valley and other parts of the state. Training is being given not only for recruitment in the ranks but also for selection in the officer cadre.

Detailed information about education qualification, physical standards and procedure, medical check up, location of recruiting offices in the state and their duties, facilities and welfare measures provided in the Army after enrolment are explained in these training capsules.

Preparation assistance provided to the prospective candidates includes provision of schedule for the exams/employment, assistance in procuring the form from the relevant place/institute, guidance in filling up the forms and ensuring their timely dispatch. After the forms have been dispatched, the intervening period is utilised for regular coaching and preparation for the exams. As part of the preparatory effort, the members are made to undergo mock tests so as to assess their readiness.  Such training sessions are also oversubscribed and have led to a lot of successful recruitment.

With a majority population in the state less than 35 years of age, chronic unemployment and under-employment has spawned problems that impact the much required constituency of peace and development. With a rising population and less job prospects, too many young people are idle and this means trouble for the state. The solution to this problem is to give the valley’s young men and women a chance to be an integral part of the development of the state.

The separatist are well aware that ushering of peace, employment and development will spell doom for their divisive politics, for which reason, they are doing everything in their power to dissuade the youth from moving forward. They create suspicion about the intentions of the government agencies by playing a religious and a political card, the Indian Army is being specially targeted under this diabolic plan.

By attending Army recruitment rallies in great numbers the youth of the state have given a clear indication that they are not affected by the propaganda of divisive elements and are looking forward to a life with better prospects that comes by through honest hard work.

It is necessary for the leadership of the state to understand the aspirations of the younger generation and meet the same. Gainful employment and wide exposure to the outside world is the best way to keep the youth away from the shadow of the gun. It is only the unemployed, the poor and the frustrated who fall prey to the evil indoctrination practices being followed by forces of evil based on foreign soils and their stooges in the state. They are the ones who are lured with false promises and dreams of fighting Jihad (Holy war) against their own people. They do not realise that they are, in fact, being told to go against their own religion.

The Army has shown the path and is following it successfully, it is now up to the government to carry forward the good work.