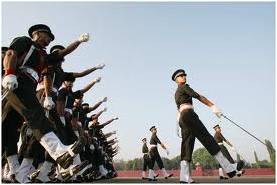 The Prime Minister’s Office has opened the doors to allow Captain and Major-rank defence officers to sit for limited departmental examination to join the Indian Police Service to bridge the shortage of IPS officers. The Union Public Service Commission is expected to hold the limited competitive examination for assistant commandant and deputy superintendent of police-rank officers from 2012. The home ministry was earlier piqued at demands that army officers who join the IPS be ranked higher than other inductees from the police. As on January, 01, this year, there were 3,393 IPS officers against an authorised strength of 4,720, leaving a shortage of 1,477 IPS officers. Nearly 10,000 posts are lying vacant in Intelligence Bureau across the country.

While this is good news for the Police forces which will get some much needed discipline, one wonder how the Ministry of Defence will agree to the proposal given the massive shortfall of officers in the Defence services, especially so, in the targeted levels of Majors/Captains.