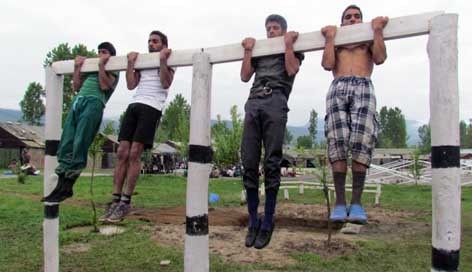 Always sensitive to the problems and needs of the people of Jammu and Kashmir, the Indian Army has come up with an initiative to uplift the youth of the state by increasing its recruitment in the Territorial Army (Home and Hearth)  [TA (H&H)] battalions of the Jammu and Kashmir Light Infantry regiment.

The decision to increase the intake has been taken with a view to make a major contribution to the rehabilitation process in the flood-hit areas of the Kashmir Valley. The trickle-down effect of a job with the defence establishment is such that a whole family becomes financially comfortable if one of its sons gets recruited as a soldier.

A TA (H&H) recruitment rally was held in Pattan on April 27 for recruitment of personnel from Bandipora, Ganderbal, Kupwara, Budgam, Pulwama, Kulgam, Shopian and Srinagar.

The rally, as usual, witnessed a large turnout of prospective candidates.  Such was the response that the selection process had to be carried out over two phases.

As a prelude to the rally, a common entrance exam was held at Hyderbeigh (Pattan) on April 26, 2015. Only selected candidates then went for the final round on April, 27.

“This is another successful endeavour undertaken by army to help the youth of the valley and help them to recover from the devastating floods,” said a spokesperson of the army on successful culmination of the rally and 100 percent filling up of the vacancies advertised for.

Earlier, on March11, the Indian army advertised for 55 vacancies in TA (H&H). In an unprecedented development about 20,000 youth from across the Kashmir valley came for the selection.

The biggest attraction for the youth for such rallies is the firm belief that the selection process will be fair and transparent. They feel that they stand a chance if they fulfill the requirement and that too without culling favour.

The response, as seen by the recently held rallies, is an indicator of the desire of the Kashmir youth to opt for peace and progress. Those who came for recruitment included many graduates and even post graduates.

Those who opt for joining the service are aware that their families may be targeted by the terrorists. Yet, they are prepared to risk their lives to earn their livelihood and in the bargain also serve the country. It is notable that the areas from where recruitment has been carried out are known to be militant strongholds.

Sadly, the recruitment process elicited minimum response from the media. Small new items were carried by a few local newspapers, the national print and electronic media did not carry the story at all.

This poor response strengthens the assertion made by the Peoples Democratic Party President Mehbooba Mufti during a recent interview with a news channel, wherein, she questioned the wisdom of dwelling on the marginalised minority of separatist and divisive forces while sidelining the real issues that affect the people of the state.

She very rightly placed the people who came out in large numbers to vote for peace and democracy above the separatists who give nothing but negativity to the region.

She listed out financial stability, flood relief, development, tourist inflows, security and such like issues as more important for articulation than stray incidents of violence and separatism.

The army recruitment drive comes in the all important category of financial stability since it provides jobs to the youth. Yet, the initiative finds it finds no takers in the media.

Why is the media not questioning the inability of Masarat Alam and his ilk in stopping the youth from participating in recruitment rallies and joining the army?

Is it not evident that the youth are no longer inclined towards the disruptive and regressive separatist agenda and are more interested in joining the national mainstream with honourable jobs and livelihood?

The media should highlight such points also.

Media interest or disinterest notwithstanding, the fact is that the state of Jammu and Kashmir is move slowly but surely on the path of peace, progress and development. All instruments of state, of which the Indian Army is one, are putting in a sincere and dedicated effort towards this end and the results are quite visible.

The enthusiasm of the youth to join the security forces, be it the Army, the paramilitary forces, or the JK Police, is an unambiguous rebuttal of the separatist agenda. The youth follow the path of disruption and violence in frustration caused by lack of employment and opportunity. The natural disasters have only added to this feeling of dissatisfaction.

The additional recruitment in TA (H&H) that the army is undertaking could not have come at a better time. These TA (H&H) battalions comprise of troops enrolled from the area where they operate. Minimum education level is eight standard and age limit is 25 years and below.  Ex-servicemen, Ex-STF/SPO and surrendered militants are also enrolled in these battalions.

The output of TA (H&H) units has been much beyond the expectations of the Army.  The loyalty and dedication of the TA soldier is fast becoming a role model for the youth of the region.

The people must show a similar drive and determination in pursuit of job opportunities across India as they have shown for recruitment in the Army. They must try to venture in as diverse fields as is possible. Generate must generate the confidence, the will and the capacity to compete with the best.

The instruments of state must thus motivate the youth through proper communication and creation of opportunity. Honest and dedicated efforts can deliver excellent results and move the state on the path of positivity.