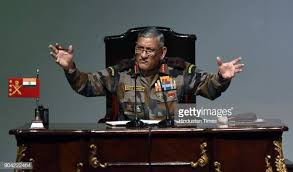 The annual press conference of Chief of Army Staff (COAS), Indian Army, on the occasion of Army Day, was held on 10, January this year. As was expected, more than 50 percent of the questions related to Kashmir and the situation there. This is a clear indication that the media stays tuned to the Kashmir imbroglio more than anything else. The Army Chief, General Bipin Rawat, was forthright in his answers; he did not hesitate at any point and spoke his mind with utmost honesty.

What the media thinks about the situation in Kashmir and how the Indian Army is responding to it can be deciphered from the proceedings of the press conference.

The media raised questions about the ongoing cycle of violence and questioned as to why the operational gains of the Army over the last two years have not resulted in reduction in the number of local boys gravitating towards terrorism. In the questions there was a hint of the media perception that excessive force is being used over there. There was the usual concern about the continuing cease fire violations, especially so, in the region south of the Pir Panjal mountain range.

Expectedly, the issue of the Army Chief rooting for India being a party to talks with the Afghan Taliban and the statement by ex-Chief Minister Mehbooba Mufti suggesting application of the same template for talks with the Hurriyat leaders came up during the press conference.

With regard to operations in Jammu and Kashmir the chief said that there was a gradual forward movement discernible in the situation. He reiterated the appeal to those pursuing the path of terrorism to come over-ground and look at peace as an option. He mentioned that recruitment is on the down side despite terrorist Tanzeems terrorising the people into joining their ranks. It is so because the people are understanding that terrorism is not the best way forward and a different approach is required to break the cycle of violence.

Notwithstanding the appeal to the youth, the chief left no doubt about the Army pursuing its mandated task of purging the region of the curse of terrorism in order to ensure that peace comes to the valley. “If we slow down operations who will guarantee that our convoys and installations will not be attacked,” he posed as a counter question. On the issue of quantifying the amount of force to be used, the chief, while explaining the difficulty on ground in differentiating between a pistol fire and an AK 47 fire, said that once contact is made with the enemy the troops across the world fire with what they have.

On the issue of propaganda being used as a tool to enhance recruitment in terror folds, the chief admitted that enhanced information sources through the media and social media are giving a boost to enemy propaganda. He identified the large processions during funerals of slain terrorists, according to them a martyr like status, giving exalted stature to their mothers and wives and indoctrination through Mullahs and Maulvis as the most potent tools of the propaganda campaign. He gave a hint of action being in hand to counter these anti-national actions being taken by terrorist Tanzeems and their supporters.

On the issue of equating his suggestion to talk with the Taliban with engaging the Hurriyat as suggested by Mehbooba Mufti the chief, very rightly, advised against comparing the two as one is related to international diplomacy while the other is a internal/bilateral matter. While on the subject he clarified that the Hurriyat should come to the negotiating table after breaking contact with Pakistan since talks and terror cannot go together.

The chief hinted upon the use of soft power by the Army on a number of occasions during his interaction, thus giving an indication of the importance that he accords to the approach. He spoke of the benefits being accrued from the Army’s civilian welfare initiative, Operation Sadbhavana, and the high aspiration levels of the Kashmir youth which need to be leveraged.

On the issue of ceasefire violations, the chief said that the same are continuing manly to facilitate infiltration and also to extricate the terrorists during failed infiltration attempts. He explained that Quad Copters are being used for area sanitisation operations and their being shot down by the enemy does not amount to a big loss or a big issue. He reiterated the concern of the army for civilians on both sides of the border and the line of control who are suffering due to the cross border firing but also explained the difficulty in differentiating between the terrorist and the civilian once an infiltration bid begins from the other side.

To summarise, the media continues to show concern about the situation in Kashmir in terms of the cycle of violence, recruitment of local youth into the fold of terrorism, infiltration and quantum of force being used by the security forces. It is looking for new initiatives, both military and diplomatic, to break the status quo and get the region of the road to normalcy.

The chief, on his part, has left no doubt about continuance of counter-terrorist operations till such time that the last terrorist is not eliminated by the security forces, even as efforts to wean away the youth from pursuing the self destructive path of terrorism will continue. He has laid a lot of emphasis on the use of soft power to wean away the youth from the vice like grip of terrorist organisations and their helpers. He stuck a positive note by saying that the number joining the terrorists ranks is on the down slide since people are realising the futility of pursuing this path.

It is to the credit of General Bipin Rawat that he took on questions from the attendant media for two hours and gave comprehensive answers to all queries in a precise and transparent manner. What remains to be seen is how the political class, the civil society, the parents, elders, role models and religious leaders of Kashmir respond to his appeal to stop the youth from following the road to self destruction.