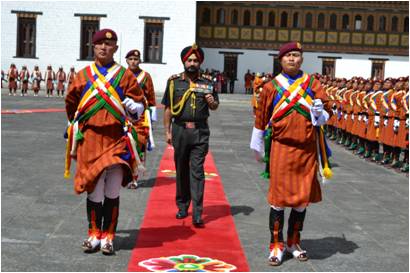 The Army Chief, General Bikram Singh, visited Bhutan over three days from August, 28 to August 30. Defence cooperation, a traditional hallmark of the close relationship between the two countries was characterised by establishment of the Indian Military Training Team (IMTRAT) at Bhutan in 1962. A sizeable number of officers of the Bhutanese Army are trained in India; in 2005, the Bhutanese King attended a course at the prestigious National Defence College, New Delhi. Bhutanese officers are invited as observers for exercises conducted by the Indian Army; they are also invited to attend seminars and conferences. Interaction through sports and adventure activities is given great priority.

The visit gains significance in light of the close relationship between the two countries and the strategic importance of Bhutan for India. This is General Singh’s second visit abroad after taking over as Army Chief, the first being to Nepal. It is perceived to be part of an effort to strengthen India’s military relations with its neighbours.

In the course of his visit General Singh called on the King of Bhutan, His Majesty Jigme Khesar Namgyel Wangchuk and the Prime Minister, Shri Lyonchhen Jigmi Yoezer Thinley. The discussions with the King and the Prime Minister were held in a cordial and friendly atmosphere. The Chief also visited IMTRAT on August, 30, and reviewed the training being imparted to students of the Royal Bhutan Army at the Wangchuk Lo Dzong Military School of Bhutan.