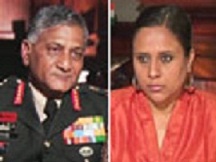 Army Chief General V K Singh told NDTV that legal protection and clarity was needed for soldiers in case they have to retaliate against possible Maoist attacks while running a training facility for the Police and Para-military forces in the Naxal hit areas. The Army is poised to set up a counter insurgency training facility in Narayanpur district, along the edges of Abhujmard – a Maoist-controlled forest plateau straddling Chhattisgarh and Maharashtra. This statement of the Army Chief clearly implies that the army is looking at ways and means of safeguarding itself in case its men and its training establishment is attacked by the Naxalites. All this can lead to a constitutional and a social challenge given the fact that there is no proposal to provide protection to the Army personnel by extending the armed Forces Special Powers Act to these areas.

With respect to J&K the Chief has once again clarified that there is no proposal for a cut in the presence of the Army in the State. This statement gains significance when seen in the backdrop of the proposed withdrawal of 10,000 Para-military troops from the Valley. The presence of the Army in the State is more for its primary task of guarding the borders rather than the counter terrorism role. In the event of any decrease in terrorist initiated activity, it is only proper to move out the Para-military forces and hand over more responsibility to the J&K Police. The Army has to stay active as long as attempts towards infiltration are on and there is confirmed intelligence about the existence of terrorist camps in Pakistan Occupied Kashmir.