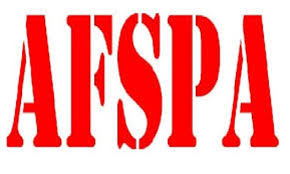 The state of Jammu and Kashmir has been witnessing an enhanced spiral of violence in the last month or so along the Line of Control (LOC) as also in the form of terrorist initiated activity in the hinterland. The security forces are giving an adequate and proactive response to the challenges posed by enemies of the nation operating against this frontier state. The evil designs of the enemy are not accruing the desired results, for which reason, there is increasing frustration resulting in more effort being put in.

An important agenda before these inimical forces is to psychologically suppress the security forces. In this domain, a campaign against the imposition of the Armed Forces Special Powers Act (AFSPA) has traditionally held primacy and continues to do so.

Much is being written and said about the so-called “Draconian” nature of the act, insofar, that it gives sweeping powers to the Indian Army in dealing with civilians. It is being said that the forces are going against the spirit of the special powers vested upon them.

Assistance in building the aforementioned narrative is being provided by certain moles who carefully frame First Information Reports (FIRs) on acts performed by the troops during counter-terrorist operations and performance of routine functions like patrolling/convoy movement. These FIRs go to the extent of alleging murder. The narrative is being given a boost by the captive media within the state, especially Kashmir, to build a persona of trigger happy troops blatantly misusing the provisions of the Act.

The target of the propaganda is the gullible civilian population and the end result desired is creation of an upsurge of negative emotions that would boost the objective of continued disruption and divisiveness within the state.

It is necessary to break the myth being created and look at the reality as it exists. Instability in the state is being created by an inimical neighbouring nation (Pakistan) that is ready to go to any extent to fructify a division of the Indian Union.

The enemy nation is question has available to it tremendous power and resources that it is applying with impunity. The Government of Jammu and Kashmir, naturally, does not have the capacity to meet the challenge from within its resources. It is for this reason that the army has been called upon to control what is deemed to be a situation of “Public order,” but in reality is a literal siege by a hostile power.

The Army and the paramilitary forces operating in the state have an onerous responsibility to thwart all evil designs of the enemy and meet the aspiration of peace and tranquility that the common man harbours, and this is exactly what the forces are doing. While fighting foreign ingress in Jammu and Kashmir the soldier is only living up to his oath of securing the sovereignty and integrity of his nation and he can, by no means, be faulted from doing so.

The Indian Army has evolved a stringent code of conduct for its soldiers operating in Jammu and Kashmir. All units being inducted into the state are trained in various aspects of operations and the code of conduct to be followed is an integral part of the training.

A word about the “draconian’ nature of AFSPA and its misuse by the Army; the Act does not give the soldier immunity from law, it merely places the soldier under a different set of laws that are equally stringent, if not more, than the Criminal Procedure Code. It is an enabling legislation that facilitates the soldier to function under an extraordinary situation without worrying about his own exploitation through legal means.

The army has, on several occasions, used the strict provisions of the Army Act to punish such soldiers who have committed criminal offenses while on duty in Jammu and Kashmir. Cases pertaining to violation of law have been investigated. General Court Martial’s (GCM) have been convened and defaulters charged sheeted. The judicial procedure has been completed in a time period much less than what would be taken in a civil court. Justice has been fast and punishment exemplary.

With the advent of terrorism, many nations including developed countries, have modified their laws and made them more stringent to meet this menace. Sweeping powers, which would not stand scrutiny of Human Rights principles, have been given to the Police and Homeland Security since they are considered to be the need of the hour. These powers are more stringent that the provisions of AFSPA.

It must never be forgotten that the Army while fighting against foreign sponsored insurgency and terrorism in Jammu and Kashmir has taken enormous risks of life and limb and has made tremendous sacrifices in order to protect the common man. The prime motivation for this has come from the love and respect that the common man of the region has bestowed on the soldier over all these years. The bond between the “Jawan and the Awaam” (soldier and the people) of Jammu and Kashmir has always remained strong and unique.

The silver lining is that the enemy has already suffered a resounding defeat. The situation has been brought to a level when only a few hundred terrorists are operating and that too in a confined area of the Kashmir Valley. The level of violence is minuscule when compared with what was witnessed a decade back and beyond.

The enemy is wilting under constant pressure but he is not relenting from his evil designs. Till such time that Pakistan does not stop the export of terror from its soil the army has no option but to keep the pressure on and ensure that the threshold of violence is not allowed to escalate. Under these circumstances, there is little leverage to revoke AFSPA.

Enactment and maintenance of stringent security laws is not easy for any country. Yet, most countries are going ahead and enacting these since it is the need of the hour. India is facing very critical challenges with respect to its internal security; more than others it is in need for enabling legislations.