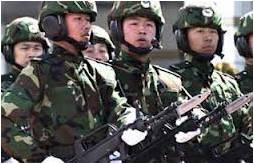 A contingent of about 30 Chinese soldiers came 10-12 kms inside Indian territory at Burthe in Daulat Beg Oldie, Eastern Ladakh on April, 15. A faceoff has been going on ever since. The Indian government is attempting to diffuse the situation at diplomatic, political and military levels to avoid an adverse impact on relations between the neighbouring Asian giants. The Army Chief has visited Jammu and Kashmir to take a firsthand review of the situation. He has discussed the matter with senior commanders of the Northern Command and also conferred with the Governor and Chief Minister of Jammu and Kashmir.

An important development on the sidelines of this faceoff is that the government of Jammu and Kashmir has voiced concern over the reported intrusion. The Minister of State for Home of Jammu and Kashmir, Sajjad Ahmad Kichloo, told reporters on April, 22, that the State government had taken a very serious view of the matter and fed the information to the Union Home Ministry. On Wednesday, April, 24, Chief Minister Omar Abdullah, in a public meeting at Kathua, urged the centre to give a “clear cut message to China on the intrusion issue.” “We would like the central government to take up this issue with both China and Pakistan strongly and on the same terms so that no such incident takes place in future,” he said. It is very heartening to see the interest that is being generated at the State level about larger strategic issues concerning the borders of the State. Postures like this will go a long way in establishing homogeneity in the ethnically and geographically diverse Jammu and Kashmir, that suffers from a fair degree of mistrust between the three regions.

There are many other matters that need similar attention from the government of Jammu and Kashmir. Primary amongst these is the Chinese presence in Gilgit-Baltistan and Pakistan Occupied Kashmir on which the State government should also give its views. These are territories of the State under forcible occupation of Pakistan. Huge tracts of land have also been illegally handed over to China by Pakistan. A firm stand on the issue by the State government and discussion on the subject in the State legislature would go a long way in showing support to the beleaguered people of the region who are fighting a lonely battle against the worst form of colonization in recent times.

There are also matters concerning infiltration of terrorists by Pakistan across the line of control into Jammu and Kashmir that the state government should be seized with. The Union Defence Minister has stated in the Lok Sabha that 168 terrorists were killed by the Indian Army in Jammu and Kashmir in the last two years. In 2012, 73 terrorists were killed,10 along the line of control and 63 in the hinterland. Most of those killed were of foreign origin sent by diabolical forces sponsored by the government of Pakistan into Kashmir with the express intention of breaking away the region from the Indian Union. In the ongoing incident in Eastern Ladakh we have a group of regular soldiers of a foreign country causing alarm to one and all, even though they are not indulging in any form of violence. On the other hand, the hordes that intrude from Pakistan and cause death and destruction are looked upon as routine happenings. The probably reason could be that Pakistan sponsored infiltration and terrorism has been happening for quite some time now and is no longer a novelty.

In fact, while the army is being called upon to do everything possible to dissuade the Chinese form indulging is such brinkmanship in Eastern Ladakh, in Kashmir, where the situation is even more dangerous it is being maligned by vested interests. The State government stands by taking no action. In fact, the National Conference, which is the senior partner in the ruling alliance, has a policy towards the presence of the army which is not conducive to the overall interest of security in the State. The constant calls for removal or dilution of enabling legislations like the armed forces special powers act (AFSPA) are not considered by experts to be in tune with the reality that exists on ground.

What is even more distressing is that certain sections of the media and political leadership are openly talking against the role of the security forces in Kashmir. A recent article in a well known English daily of the State talks of “the absolute right of the para-militaries and the police to being brutal beyond the combat against the demand for ‘azadi.” The writer seems to be implying that there is a legitimate movement for ‘azadi’ (freedom) in Jammu and Kashmir that is being brutally subdued by security forces (other than the army) and that the brutality is now extending beyond suppression of the so called ‘azadi’ movement to day to day happenings. This, to any right thinking nationalist, would amount to sedition, yet, the State government stands by as a mute spectator. Divisive and disruptive forces will not sit still even if the army is removed from the scene, they will continue to create problems till such time that the evil design of ‘azadi’ does not fructify. Would it be proper for the nation to yield even an inch to this diabolical plan?

In military parlance, an intrusion implies a breach in the territorial integrity of the nation. It goes without saying that an intrusion of any form is unacceptable. With the State and the central government being on the same page with regard to the national reaction to intrusions, it would be appropriate to apply a single yard stick to all such incidents and look at them with an equal degree of concern. A good beginning has been made in the wake of the incident in Eastern Ladakh now what remains is maintenance of pressure on all sides.