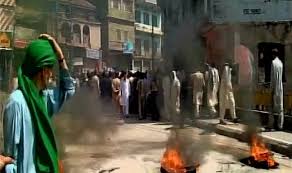 Pakistan has, for ease of management, divided the area of Jammu and Kashmir under its forcible occupation into two entities, Azad Kashmir and Gilgit-Baltistan. This facilitates suppression by the principle of divide and rule. Both entities have been given a sham system of self governance with actual power vested in the federal government and exercised through the draconian Ministry of Kashmir and Affairs.

It is sad that not much has been heard or said about the recent sham of elections in POK.  The Indian media has not covered the event and the Government of India has, once again, failed to speak out for the rights of the people who are essentially Indian citizens under foreign occupation and rule.

Elections for 41 lawmakers into the 49 member house were held on June, 26 on completion of the term of the previous Pakistan People Party (PPP) government.

The Government of Pakistan created a big hue and cry about the supposed fairness of the elections. Government agencies, with active support of the Pakistan media, went overboard in emphasising that as many as 26 political parties and 423 candidates would participate in the elections.

Whenever such sham elections are held, the party which is ruling in Islamabad invariably emerges as the winner; the result of the recent elections declared on July 21 was no different.

As is the precedent, the election was brazenly rigged. That the ruling Pakistan Muslim League-Nawaz (PML-N) bagged 31 seats out of the 41 seats for which direct elections were held did not come as a surprise at all, it was expected and anticipated.

The outgoing PPP got a measly two seats while All Jammu and Kashmir Muslim Conference (AJKMC) and Pakistan Tehreek-e-Insaf (PTI) had to be content with 3 seats each. Others just fell on the sidelines.
What has gone unnoticed is the massive round of protests, both during the election and after the results were declared.  People were out on the streets demonstrating against the blatant manner in which the Pakistan Army and the Rangers, who had been given responsibility for maintaining security, assisted the government agencies in carrying out the rigging.

Immediately after the results were announced the people took to the streets in vast numbers shouting slogans against Nawaz Sharif, the Government of Pakistan and the infamous Inter Services Intelligence (ISI). People openly held ISI responsible for the rigging.

Violence was reported in many places even as the Army and the Rangers moved swiftly and ruthlessly to subdue the agitated people. At the end nothing came of the valiant effort of the people and the majority will was, once again, stifled by the state authority. Information did not come out since the region was closed to media scrutiny as is the routine.

PML-N has installed one Raja Farooq Haider Khan, about whom nobody has ever heard, as the puppet “Prime Minister.” He will now enjoy the perks of being a Prime Minister while doing nothing for the people since actual governance will remain in the hands of the Ministry of Kashmir Affairs as hitherto-fore.

Part 2 of Section 7 of the unconstitutional Constitution of POK states, “No person or political party in Azad Jammu and Kashmir shall be permitted to propagate against or take part in activities prejudicial or detrimental to the ideology of the State’s accession to Pakistan.”

Along similar lines, the oath of office for all office bearers and elected members includes: “That I will remain loyal to the country and the cause of accession of the State of Jammu and Kashmir to Pakistan.”

In the recently held election the authorities went a step further in making all candidates sign an affidavit that stated, “Kashmir Banega Pakistan” (Kashmir will become Pakistan). The nomination papers of candidates of Jammu Kashmir Liberation Front (JKLF) and All Parties National Alliance (APNA) were rejected because they refused to sign this affidavit.

This act by the Government of Pakistan is a direct slap in the face of all such lobbies in Kashmir that are rooting for separation from India for creation of a free state. There is no doubt that Pakistan has no interest  in their “right to determination” as it says in all international forums. It is, instead, determined to exercise control over the entire region and that too in the form of a colony.

What is even more shocking is that the separatists in Kashmir have nothing to say in support of their brethren whose rights have been so blatantly trampled upon. They forget that Pakistan is supporting a call for “self determination” and the first step in this support is to provide all liberties and self governing powers to the people who are under its control.

On the other hand, the Indian state of Jammu and Kashmir has, since independence, enjoyed a status of complete integration with the Union with elections from the State Legislative Assembly down to the Panchayat level being held regularly. The state also has its due representation in the Union Parliament for which also elections are held in accordance with constitutional statutes.

The Pakistani government cannot be allowed to continue holding sham elections to give an impression that all is well in POJK. It has to stop heaping atrocities on the subjugated people and colonising them. Till such time that the dispute reaches its logical conclusion and the area is returned to India where it belongs, Pakistan should maintain civilization norms and not deny to the people their basic rights. Pakistan Government should take practical and visible steps to ensure holding of free and fair elections, and the functioning of a local government, at least, of the type that is being run in its other provinces.

(Mehtab is a US based Engineer and columnist)