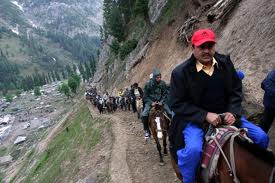 On June, 28, amidst great fanfare the Amarnath Yatra in Kashmir for the year 2013 was declared open. It will conclude, in accordance with tradition, on the day of Raksha Bandhan, August, 21, 2013. Within this time frame, lakhs of pilgrims will visit the holy shrine. Successful conduct of the Yatra with no casualties is something that the organisers from the Shrine Board and the State government would be looking forward to quite anxiously. The fact the last year witnessed the largest number of fatal casualties ever recorded during the pilgrimage period is weighing on everybody’s mind. The figure went up to130 people who lost their lives, 88 due to health reasons and 42 due to accidents en route.

The Amarnath Yatra is an event that probably rivals the Kumbh Mela in terms of its sanctity and religious significance. An annual feature, its uniqueness lies in the difficult terrain and the inclement weather that has to be overcome in order to reach the holy site. The conduct of the Yatra is definitely far more complex than the pat on the back that the State government and the Shrine Board tend to give to themselves once it is over. What goes unheralded and unacknowledged is the contribution made by many other agencies that join hands in making the Yatra successful. It is difficult to imagine the problems if these agencies do not step in to assist in the overall effort.

A peaceful and incident free Yatra sends out a message of peace and tranquillity in the valley. A missive of this nature certainly does not fall in line with the nefarious designs of terrorist forces operational within the valley and on the other side of the border. There remains, therefore, a very real danger of such forces trying to disrupt the Yatra. It is the security force deployed in the State – the para-military troops and the Indian army along with the Jammu and Kashmir Police, who have the onerous duty of ensuring safe conduct of the pilgrimage.

The task of the security forces begins much before the pilgrims arrive. It is our Army soldiers who ensure that the entire route is secured against any kind of security threat. To do so they go over the entire route of the pilgrimage, at considerable risk to their life and limb, to set out the trail that the pilgrims ultimately tread. It is only after the Army gives a go ahead on preparation of the route that the next step of starting the pilgrimage is taken. Mostly, it is sheer perseverance of the Army which leads to a timely conduct of the induction run and ensures that the Yatra begin on time; this year was no exception.

Having ensured the safety of the pilgrims by securing the route and in putting in place an elaborate security set up, the Indian army continues to stand alongside the organisers like the ever watchful sentinel, ready to respond to any exigency in accordance with a mantra of, “constant vigil and full preparedness.” Even though the given mandate is restricted to the provision of overall security cover, the force provides immense humanitarian aid to the pilgrims.

Throughout the Yatra, in addition to the arrangements made by the civil administration and other voluntary organisations, the army provides food, refreshment and shelter to thousands of pilgrims. Helping the aged and the feeble negotiate the adverse terrain was yet another goodwill gesture of the Army that earns for it d a lot of appreciation. Children who are separated from their parents in the large crowds find friendly guides in the men in olive green who led them back to their worried parents.

The arduous trek and debilitating weather results in a number of pilgrims falling ill; the army sets up medical aid posts at various points along the route that are open to all civilians day and night. Thousands are rescued every year from succumbing to adverse weather conditions by this thoughtful gesture. This apart, the army also carries out evacuations of serious casualties. Veterinary camps are organised to ensure the safety of the ponies, pack mules and other animals used in the Yatra. The army has exigency plans in place to meet any natural calamity which, one fervently hopes, is not required to be activated.

The mere presence of the Indian soldiers gives a sense of security to the pilgrims who tread the dangerous unforeseen terrain. The alacrity with which the Army responds to emergency, however small, and the integrity with which it performs its duty leads many to acknowledge the support with words of praise and admiration. It is not without reason that the army commands such respect in the eyes of the pilgrims. The army, by virtue of its size and wherewithal, plays a more prominent role that, by no mean, belittles the excellent effort put in year after year by the Para-military forces and the JK Police.

During the last few days, the Army on its part, felt the need to inform the people that the terrorist threat had been appreciated and adequate security to counter any misadventure was in place. Such a missive, from an appropriate level, is also important to ensure that the administration and the pilgrims maintain a high state of awareness and vigilance. It is very sad that the missive of the army, reinforced by the Union Home Minister, was misinterpreted and misrepresented by some and the entire matter was politicised in a manner that can happen only in the Kashmir valley.

More important than the mindless debate that came about in this regard is the physical well being of the pilgrims. The Supreme Court has pointed at certain administrative lapses that led to an unprecedented number of fatal casualties last year. Maximum attention of the State government and the political leadership of the state needs to be directed to this aspect. Now is the auspicious time when everyone should put his best foot forward to ensure the successful conduct of the Yatra.