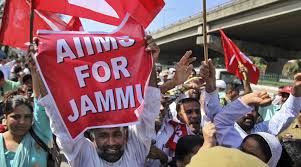 The issue of location of AIIMS in the state of Jammu and Kashmir is attaining a critical dimension. The statement by Chief Minster Mufti Mohammad Sayeed indicating that the prestigious institution would be located in Kashmir and not Jammu has led to a spate of agitations in the Jammu region.

The trust deficit of the Jammu region with the coalition government seems to be hitting a crescendo. There is an overriding perception doing the rounds that Jammu never gets any institution of repute without agitating for the same. There is some merit in this perception. It cannot be denied that Srinagar city has always received better facilities than Jammu as is evident by the location of the SKIMS. Regional Engineering College, SKUAST etc over there.

The feeling of discontent in Jammu, which is spilling out on the streets, has the potential of spiraling out of control. It seems that a revisit of a situation akin to the Shri Amarnathji Shrine Board (SASB) led agitation of 2008 is building up in the state. It is notable that some decisions by the PDP, then in government, led to the SASB agitation and breakdown of the government.

There is a lot of merit in the advocacy for opening AIIMS in the Jammu region. The geographic location serves a larger area of the state. The continuing situation of disruption in the Kashmir valley and the existence of a major medical institution in the valley in the form of SKIMS need to be considered while taking a decision on the issue.

Even as the matter is under consideration, the Kashmir valley has been hit by a spate of attacks by militants on the telecom facilities. Telecom employees and those who have rented out space for installation of mobile towers have been attacked of late. IS there any guarantee that AIIMS in Srinagar will not be subject to such targeted disruption? Under such circumstances who will come to work in AIIMS in the valley? if eminent doctors and other staff does not seek service the institute will not be of any value whatsoever?

It seems that Chief Minister Mufti is trying to push the agenda without credible argument in its favour.  His is an out and out political posture. He is not behaving like that statesman that his party would like to project him as. The face-off is a clear reflection of the immaturity of the political establishment.

Chief Minister Sayeed is leaving no stone unturned to ensure that that the region is deprived of the development it badly needs. The interest of the people is being sacrificed on the alter of his misplaced political ideology.

Mufti is trying to see as to how far the BJP government at the centre can be stretched to meet his unreasonable demands. The maturity with which the BJP leadership is dealing with the  tense political situation that the PDP leadership is creating is commendable. However, there is a limit to which the party can accommodate considering that it is already losing its constituency in the Jammu region. It cannot commit political suicide in the state to keep Mufti going. Surely, the BJP will be looking closely at the brush off that the people have given to the rally to be addressed by Home Minister Rajnath Singh.

If the state leadership does not show requisite statesmanship in dealing with the development package; if it does not keep the overall good of the state in mind, it is bound to lose out on the historic opportunity that is coming its way.

Any leader worth is salt, most of all Prime Minister Narendra Modi  would hesitate to take a development initiative that would backfire in the manner that the AIIMS imbroglio seems to be developing. Is It is worth its while for the centre to bring AIIMS and IIM in the state if it will  divide the people rather than integrating them? This is a question that should be engaging and must be engaging the leadership at the centre very seriously.

The decision to be taken in this sensitive issue needs to be such that benefits all the people of the state and helps get them closer to each other rather than creating a bigger divide than what already exists. Development initiatives should not create a feeling that the state is an unnatural integration of three diverse regions. where division is the only viable alternative.

In case something of this sort happens Kashmir will be the biggest sufferer. This is what Mufti and his ilk should understand while indulging in the kind of political adventurism that is apparent at the moment.

Another serious off shoot of the developing unrest is that it is opening a window for terrorists and divisive forces to give a boost to their agenda. That the security forces are concerned and getting ready  facing a challenging situation is evident from the statements emanating from the military leadership in the state and the frequent security conferences that are taking place.

A very good option to break the impasse would be to place both AIIMS and IIM somewhere near Reasi close to the highway that is being constructed to join the valley through the Pir Panjal range and also the train service. This would be a central location for both Jammu region and Kashmir region . It will also give a financial boost to the otherwise deprived and economically backward area.

It is necessary for the political leadership to resolve this issue in a righteous and justifiable manner without indulging in sectarian politics. An inability on the part of the of the leadership to read the larger picture and take an appropriate decision will have grave consequences. It can only be hoped that good sense will prevail before it is too late.