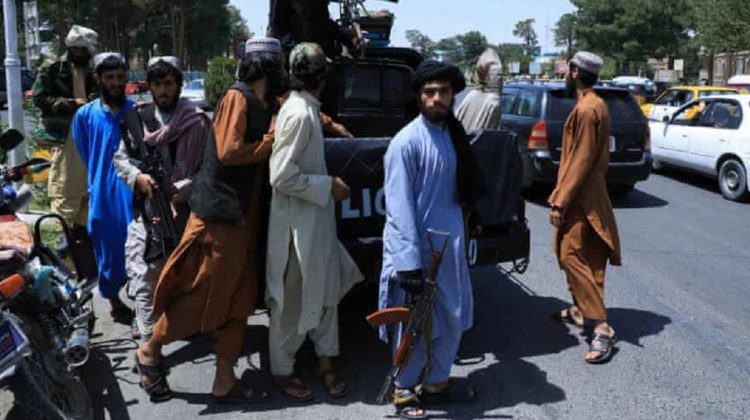 The inevitability of Taliban control over the whole of Afghanistan within a year or two of the US leaving the country was quite well appreciated. What was not appreciated was the speed with which it happened.

According to reports, the Taliban is already in control of Kabul whose fall now coincides with the Independence Day of India. Mazar-e-Sharif and Jalalabad, two important and big cities were taken by the Taliban a few days earlier; the Afghan Army soldiers and local warlords at Mazar-e-Sharif fled to neighbouring Uzbekistan. This situation has come about even before the complete withdrawal of the US that is supposed to culminate officially on August 31, even though there is very less left to withdraw any more.

There is a scramble in the Embassies to vacate even despite the insurgents giving an assurance to “protect life, property and honour (of foreigners and Afghan civilians) and create a peaceful and secure environment.”

Afghan President Ashraf Ghani had addressed the nation through a televised speech. He did not have much to offer except a commitment to remobilise the Armed Forces which does not seem to be feasible any longer. He spoke of being in consultation with local leaders and international partners, but here again not much support for him or his government is expected to come by. It is said that he too has fled from Afghanistan.

President Biden has made it quite clear that he is unlikely to change his decision of complete withdrawal. He has, in fact, authorised the deployment of 5,000 troops to help evacuate citizens and ensure a safe “drawdown” of US personnel in Afghanistan, according to Reuters.  “Look, we spent over a trillion dollars over 20 years. We trained and equipped over 300,000 Afghan forces. Afghan leaders have to come together…… They’ve got to fight for themselves, fight for their nation,” he asserted.

There is a lot of truth in what the US President has said. The moderate elements in Afghanistan had more than two decades to politically marginalise the Taliban and build a healthy democracy. The Afghan Government has also been provided with all wherewithal, money and training to build well equipped  Armed Forces and other security forces. it has, sadly, failed to make the necessary progress. It is quite surprising and shameful that a 300,000 plus trained and well equipped army would succumb to a motley and ill organised group of militants in such a short time span.

A lot many fingers are pointing towards Pakistan as the main reason behind the Taliban resurgence. It is said that there are more than 30000 troops of the Pakistan army operating in Afghanistan along with the Taliban. They are also providing the military leadership and tactical planning for the offe 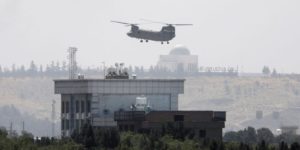 US Embassy in Kabul being evacuated

nsive. Pakistan is an expert in camouflaging its regular army troops and sending them to fight as civilian mercenaries. It did so in 1947-48, 1965 and the Kargil war against India. In Afghanistan too it has done so earlier when the Russians were in control of the country. The possibility of it having done so again in Afghanistan is not beyond the realm of reality.

The rebuttal to these allegations is coming from the abrasive Foreign Minister of Pakistan, Shah Mahmood Qureshi. “The lack of will to fight, the capitulation that we are seeing in Afghanistan… Can we be held responsible for that? No, we cannot,” Qureshi said in an interview to Reuters, adding that Pakistan supported a political solution to bring peace to Afghanistan

What Qureshi is conveniently sidelining is that Pakistan, for long, was the conduit from where the aid went to Afghanistan. How much of it was siphoned off is something that can only be speculated. Pakistan has also been responsible for giving shelter to the Taliban when it was most vulnerable. Dubious business rackets of the Taliban like  drugs and arms trade, kidnapping and extortion etc have been run from Pakistani soil. A lot that is going wrong in Afghanistan is due to its “Islamic” neighbour.

What Pakistan is not realising is that getting involved in Afghanistan is something that it can ill afford given its own fragile economic condition, unless of course its misadventure is being financed by China. The situation is ideal for what China does best – “wait and watch till an opportunity advantageous to it comes by and then pounce.”  However, the euphoria with which Pakistan and Taliban are defying the US and the rest of the world due to dependence upon China is something that they will pay a heavy price for.

The strategic decision of President Biden to stay away can be accepted on merit but the world cannot stay aloof to the humanitarian tragedy that is unfolding in the country. There are reports of lakhs of Internally Displaced People (IDPs) running from war zones. With the fighting shifting to urban centres the situation is becoming all the more critical, soon Kabul will be in no position to sustain the wave of humanity seeking safety and sustenance. Something will have to be done by the international community, The US, in particular, is honour bound to take lead in the initiative.

The evolving situation is not in favour of India which stands to lose its considerable economic assets created in Afghanistan over time. India has already evacuated from Mazar-e-Sharif  and has advised its nationals to get back before the commercial flights stop.  The strategic and security concerns which come with a Talibanised and inimical Afghanistan wholly under the tutelage of China and Pakistan are also very much alive now.

The country will be called upon to play a crucial role when the world starts grappling with the humanitarian crisis in Afghanistan. India has always helped humanity in distress and will definitely play a proactive role now too.

Strategically speaking it may become imperative for the West to get nearer to Afghanistan to keep an eye on the country, this will be feasible only if India reclaims its territories of Gilgit-Baltistan now under illegal occupation of Pakistan. It is time to look at this option closely. It is, therefore, not the end of the road for India, the work has in fact just begun.

(Jasbir Sarai is an geo-strategic analyst and columnist)