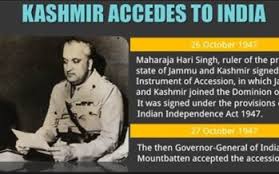 October, 26, is celebrated as Accession Day in Jammu and Kashmir, across the country and the world. It was on this day that Maharaja Hari Singh, the last ruler of the state, signed the Instrument of Accession and legally acceded to India under the provisions of the Indian Independence Act 1947.

The Instrument of Accession signed by Maharaja Hari Singh was no different in content and spirit than what had been signed by other princely states, but due to some misconceptions the then Government of India agreed to conduct a referendum or plebiscite to determine the future of the state. This plebiscite or referendum was to determine the relationship between the state and the Government of India and not the accession of the state to India or Pakistan which was, in any case, legally accomplished in India’s favour by the by the Instrument of Accession.

The very next day on October, 27, the Indian army landed in Srinagar airport and, against great odds, saved the people of Kashmir from large scale massacre, rape, loot and arson in the hands of the mercenary hordes of Kabilies (Tribal’s of the North West Frontier province) sent by Pakistan under the leadership of its army to annex the state.

The Indian troops who fought the war had only the safety and security of the people of Kashmir in mind. They did not know or care about how politics would play out in the long run. Their only concern was to ensure that the barbarians were thrown out in the shortest possible time without causing any further damage. In this, they were singularly successful, but not without paying a heavy price including loss of lives of many soldiers.

There are some historical facts that should be kept above politics. The Indian army’s role in Indo-Pakistan War of 1947-48 is one of them.

While the war was a saga of heroism there are, in fact, a few black chapters of the time that need to be highlighted.

Before the Indian army landed in Srinagar and opposed the tribal onslaught, the invading hordes had laid waste everything, including every living being, that came their way. In Baramulla, they surpassed all tenets of inhumanity. Baramulla was pillaged for four days. The men and children were tortured and killed while the women were raped and carried back as sex slaves. Even the Nuns of the Convent there were not spared; they were raped and killed ruthlessly.

Even under such terrible conditions the human spirit prevailed. A 19 year old boy, Maqbool Sherwani, went about on a cycle spreading a message that the Indian army was on the doors of Baramulla. This information restrained the mercenaries and saved thousands of lives. In fact, it stalled the march to Srinagar and literally saved the city from a fate even worse than that of Baramulla. When the Pakistanis realised that young Maqbool had misled them, they shot and crucified him. The young boy, with his courage and presence of mind, etched a place for himself in history for all times.

An overwhelming majority of the people of Jammu and Kashmir recollect the courage and sacrifice of the Indian forces in 1947 with utmost respect and admiration. Across the state, including the Kashmir valley, events following the signing of the Instrument of Accession to India by the Maharaja of the state are being remembered by holding memorials and other functions. The bravery of those who fought to save Kashmir, both civilian and military, is being remembered with utmost reverence.

Of great importance is the voices of dissent that are being heard in Pakistan Occupied Jammu and Kashmir (POJK). Residents of POJK observed October, 22, as a black day to mark the attack by Pakistani forces on undivided Jammu and Kashmir that led them to a life of colonial subjugation.

To mark the day, a series of demonstrations and seminars were held across POJK and in other parts of the world. Kashmiris across POJK are demanding the immediate withdrawal of Pakistani forces from their territory.

In Mirpur city, a rally was held followed by a conference titled “Taqseem-e-Jammu and Kashmir Namanzoor.” Rallies were also held in Rawalakot, Bagh, Hijara and Muzaffarabad. In London, exiled Kashmiris demonstrated outside the Pakistan High Commission.

The most active in the international arena was the United Kashmir People’s National Party (UKPNP). The party has urged Pakistan to hold peaceful talks with India and withdraw its forces from POJK.

“We are demanding Pakistan to withdraw its forces and end its hegemonic polices towards the POJK region,” said Jamil Maqsood, a leader of the party in Brussels, “We are also asking them not to use our area as terror hub and a hideout for LeT and Jaish-e-Mohammad terrorists who infiltrate into Jammu and Kashmir.,” he added.

It is no longer possible for Pakistan to mislead the people of Kashmir with fallacies and emotive stories based on misinformation and outright lies. The people of the state are well aware of their past and quite sure about what they want in the future. It is hoped that Pakistan will also get the message.

(Jaibans Singh is an expert on J&K, columnist and author)