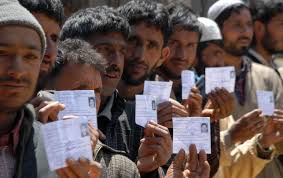 The cold bloodied killing of a polling officer in the South Kashmir constituency of Jammu and Kashmir well after the polling was over reflects the remorselessness of the sadistic forces that have vowed to leave no stone unturned in disrupting the democratic right of the people. The victim, Zia-ul-Haq, was a school teacher, totally unconcerned with politics; he was simply doing his duty. He could not have influenced the outcome of the poll process in any way. He was killed because the terrorists could not attack any booth, their attempt at stone pelting in the morning could not stop the polls and they could not target any security personnel. The polling party presented a soft target that the terrorists subjected to mindless cold bloodied violence to give vent to their frustration.

Anybody and everybody associated with this incident either directly or indirectly, be it the separatists or the masochist terror monger sitting across the border stand exposed as the cause for untold misery being heaped on the innocent people of Kashmir. Mirwaiz Umar Farooq who is a religious head, Syed Ali Shah Geelani who is a social patriarch and all of their associates have every reason to hang their heads in shame.

The acts of omission and commission that Geelani is responsible for in this entire gruesome situation come across as particularly disgusting. Media reports suggest that Syed Geelani has been sending urgent messages to Hizbul Mujahideen to kill, maim and do whatever is necessary to disrupt the elections, it is quite nauseating to note that while making such barbaric demands Geelani is putting at risk the lives of his own people.

The grass roots leadership plays a vital role in the conduct of polls in a democracy. It is the Panches and Sarpanches who motivate their people to go out and cast their votes. In the Kashmir valley the contribution to the election process of this grass roots leadership becomes all the more vital in view of the apprehensions that the people harbour in casting their votes.

The terror and divisive machinery in the Kashmir valley is well aware of this sensitivity and in the first phase of its counter-election strategy it put in place a structured plan to intimidate the grass roots leadership. The game plan became quite apparent from the targeting of Panches and Sarpanches that gained momentum about two weeks before the first constituency in the Kashmir valley went to polls on April, 24. On April, 18, a Sarpanch was kidnapped form village Gulzarpora by Hizbul Mujahideen terrorists and later killed; this was followed a few days later by another terrorist strike in Pulwama, South Kashmir in which a Sarpanch, his son and a village head were killed. During this period, terrorist also attacked the residence of a leader of the ruling National Conference at Khrew, Pulwama, South Kashmir. The leader survived but his security guards were killed as were the terrorists a little later due to the quick response of the Army.

The barbaric killings have been followed by pasting of threatening posters in many areas of South Kashmir. The posters in Urdu language claim to hold a message from the dreaded Lashkar-e-Toiba warning people to stay away from the elections and the security forces. “Lashkar-e-Toiba does not need any introduction. Keeping in view the anti-freedom movement activities we want to warn the people of dire consequences who visit police stations and army camps and persuade others to follow suit,” reads the poster.

Chief Minister Omar Abdullah has condemned these dastardly acts in an apt manner by saying that the violence indicates the “weakness of the argument” of those calling for poll boycott and that the decision to boycott the polls should be based on “conviction not fear”. He has very rightly brought out that when the government is not forcing the people to vote then why are the divisive forces resorting to the use of terror to enforce an election boycott?

A certain amount of turbulence and heightened terrorist activity was predicted in Jammu and Kashmir, especially the Kashmir valley, during the election period. The prediction is coming true in more ways than one to the extent that there is a close coordination between the terrorist and the divisive political activity. This indicates concerted planning by the Pakistan based handlers over a long period of time. A calibrated strategy to psychologically suppress the common man with the fear of terror and intimidation has been put in place to achieve this evil end.

The graduated manner in which acts of violence have been escalated and then threats have been issued to peak out a few days before the elections indicates a fair degree of professionalism in the planning and conduct of the psychological campaign. This is clearly the product of a trained military mind which leaves no option but to point a finger at the Pakistan Army and the ISI.

The events indicate that presence of terrorists in the Kashmir valley is quite high; obviously there were a lot of sleeper cells in place that had been activated as part of the overall plan to peak a little before the polls. The isolated attacks on security forces that had become a modus operandi of late have now been replaced with targeting of vulnerable civilians.

Security forces have to increase the security threshold to generate confidence among the people and get them to vote without fear. Fool proof protection, of course, remains an imperative. The catch is that enhanced security will give ammunition to the separatists to say that the elections are being carried out under the shadow of the gun. Security forces do not need to pay any attention to this propaganda; they need to perform their difficult duty to the best of their ability and do whatever it takes to ensure free, fair and secure polls in the remaining two parliamentary constituencies. India does not have to give any explanation to inimical and secessionist forces. Surely our democracy and freedom is much more valuable than their mindless diatribes based on unprincipled interests.