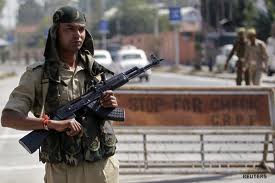 The word ‘normalcy’ has been used extensively by journalists and writers while describing the emotional aspirations of the people of the Kashmir Valley. In real terms it translates into the desire of the people to go about their business in a routine, peaceful and undisturbed manner; children go to school, men go to work, housewives go about their household chores without a lurking fear of danger for their near and dear ones. The yearning for normalcy comes from a three decade long combating of foreign sponsored terrorism which created mayhem in the lives of the people. A resolute sustained campaign has brought about a situation where terrorism is all but eradicated. There are hardly any indigenous terrorist on ground, the foreign elements are hard pressed for local support and are being targeted by the security forces through precision attacks based on specific information.

Terrorism is being kept alive by the infamous ISI by sending in fresh cadre at regular intervals. These hapless persons are given a wrong picture about the situation in the Valley. They are told that the people are fed up with the authoritarian regime of the Indian government and are looking at the Muslim brotherhood for liberation which is only one step away. As these indoctrinated cadre step into the Valley they find the situation entirely different. They at once realise that they are marked men, but by then it is too late to go back, they are caught between the fence and the security forces. These terrorists are either killed while attempting to infiltrate or within a short period after infiltration since their movement is made known to the security forces by the people themselves. Regardless of their fate, it is this cannon fodder of the ISI that maintains the spectre of terrorism in the Valley.

The moot question here is – with terrorism within controllable limits, why is the yearning for normalcy not seeing the light of day? With the summer setting in the people should be jubilant and looking forward to enhanced activity levels. Yet their enthusiasm is hampered by the fear of yet another “hot” summer marked with strikes, disruptions, death and mayhem. Already there is a lurking fear of disruption of the Shri Amarnath Yatra and the ominous calls for Bandhs- the latest having been given by Geelani for June, 11.

It seems that one enemy has been replaced by another in the Valley. The Jihadi terrorism of yesterday has given way to yet another form of terrorism of disruption also at the behest of the same inimical foreign forces which were sponsoring and funding Jihadi terrorism. There is documentary evidence available to prove that separatists and their cross-border mentors were instigating, funding, recruiting and organising these young stone-pelters, through agent provocateurs in the last few years. Stones were provisioned, targets carefully selected and attacked. The entire exercise was very well paid for at the end of the day. These idle and misguided youth were indoctrinated to create havoc. Their objective was clear; cause more deaths, because that would mean more anti-India protests, more clashes and more publicity. Their mentors, perhaps realising that their earlier strategies had failed to produce the desired results, made use of the newly created stone-pelting force to create maximum possible trouble. It was a well-crafted strategy which would have reaped handsome dividends but for the perseverance shown by the government and the security forces in the face of this brutal assault

The silver lining comes in the form of the honest effort being put in by the State government and the security forces to keep damage and disruption at the minimum level and facilitate for the people as much ‘normalcy’ as is possible. Omar Abdullah has, by detaining and sending back the human rights activist Gautam Navlakha from the airport itself, signalled his determination to stall any attempt towards disruption of peace in the Valley. As regards the security forces, the Army is very actively pursuing a policy of “heart as a weapon” which translates into use of minimum force in counter terrorist operations and civil upheaval incidents , avoiding collateral damage, acting in good faith and maintaining high moral standards.

The new approach is the result of two decades of toil by the moderate political parties who had the courage to run the government under very critical circumstances and the security forces who rendered unstinting support to the government of the day. Whether the government was run by the National Conference, or a People Democratic Party-Congress combine or the National Conference-Congress combine which is presently in power, the security forces stayed apolitical, functioned under the legitimate authority of the government and went about accomplishing their very challenging task in a unobtrusive and highly professional manner. This is a primary factor responsible for the eradication of Jihadi terrorism while maintaining a modicum of hope amongst the people who were suffering tremendously due to foreign sponsored violence.

Now is the time to defeat the diabolic designs of the disruptive forces who, it seems, are getting ready for one more round of dissent and disruption. The arena has been prepared for meeting this challenge. The central initiative of appointing interlocutors to talk to the people has succeeded in breaking the ice. The paid pelters have shown a desire to join the mainstream by applying in large numbers for the recruitment rallies of the Army, the JK Police and the Para-military forces. Business houses like BPOs, banks, telecom companies etc are hiring actively for their Srinagar branches. Overall an air of optimism prevails. The government and security forces have every reason to take on the challenge posed by inimical forces head on and thwart their attempts to disrupt normalcy in the Valley with a confidence of doing what is right and what is just. They have the support of the people and the Nation behind them.