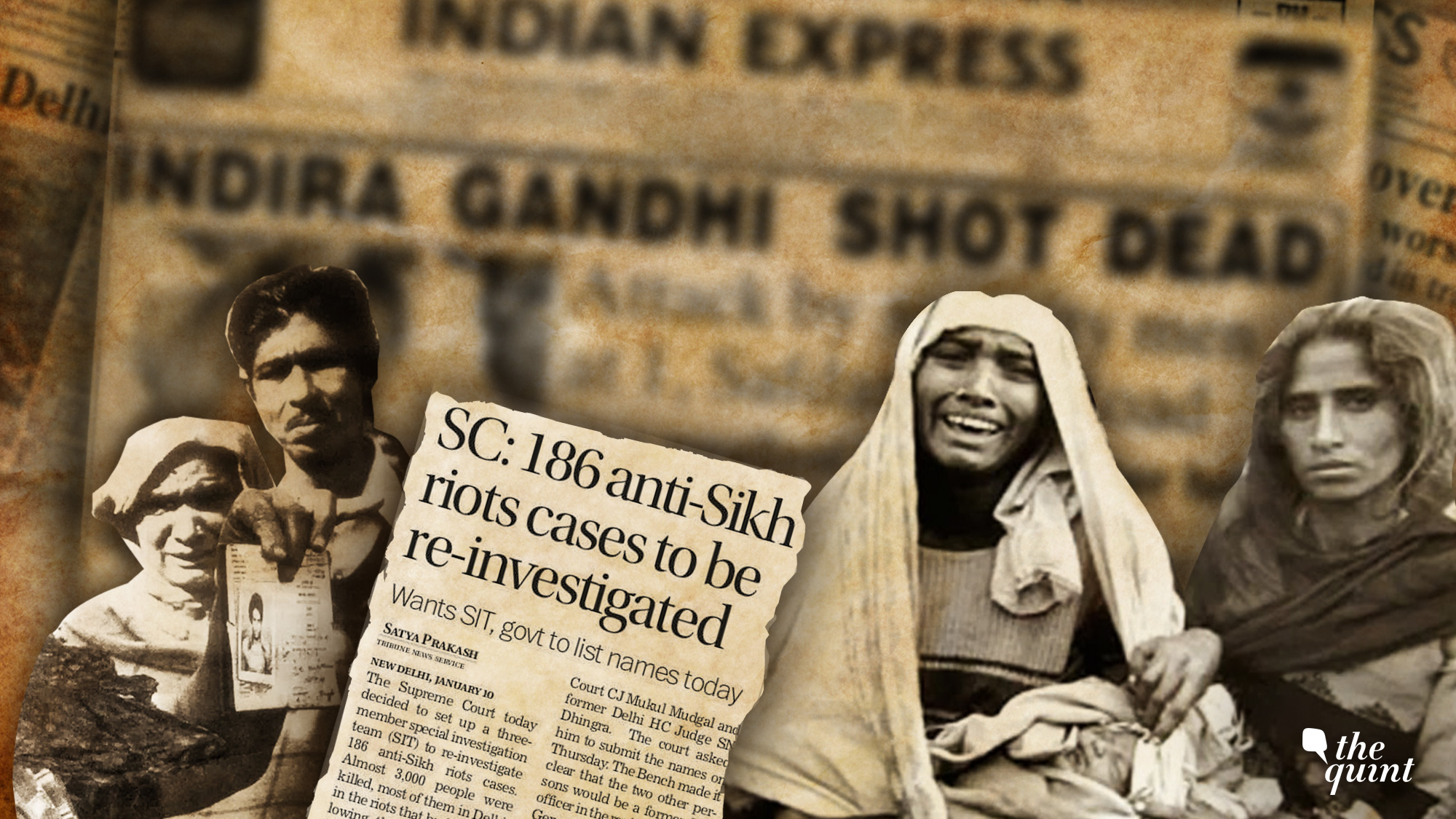 On 31 October 1984, the then Prime Minister of India, Smt. Indira Gandhi was assassinated at her residence in Safdarjung Road, New Delhi. She was killed by her bodyguards, Satwant Singh and Beant Singh who belonged to the Sikh community. The killing was in reaction to Operation Blue Star that was ordered by the Prime Minister and in which Sri Harmandir Sahib, the most sacred shrine of the Sikhs was attacked by government forces to flush out Sikh militants. The badly damaged the shrine and caused terrible hurt to Sikh sentiments, which served as a trigger for the assassination of the prime minister by the Sikh bodyguards.

Pots the assassination, as the nation was struggling to come to terms with the unfortunate tragedy, a catastrophe of unimaginable proportions started building up. The very next day, November, 01, witnessed widespread attacks on members of the Sikh community across the country. The numbers killed have never been clearly recorded or made public, but various estimates put them much above 10,000. According to official records, 2,733 Sikhs were killed in cold blood in Delhi alone, though human rights organisations place the number nearer to 4,000. The numbers in the remainder parts of India continue to defy documentation. This apart, Gurdwaras (Sikh Temples) were damaged; shops and other businesses run by the Sikhs were destroyed, their houses looted and women raped.

The killing was carried out in the most barbaric manner by use of weapons like swords and daggers, beating the victims to death and burning them alive. The most inhumane method used was enclosing the Sikh in a vehicle tyre and then setting it on slow fire. The madness went on for a number of days as the law enforcing machinery refused to intervene.

There have been attempts to pass of the genocide as a spontaneous reaction of the people distraught at the killing of their prime minister. A closer scrutiny however point towards a very well conceived and coordinated plan to “teach the Sikhs a lesson.”

The assassination of the prime minister took place at 0920 hours on October, 31; the sad news was broadcasted by All India Radio at 1100 hours after she was declared dead by the doctors at the All India Institute of Medical Sciences (AIIMS), New Delhi. Rajiv Gandhi, the son of the demised prime minister and later prime minister of the country, arrived at New Delhi at 1600 hours. Till then there was no killing, even as isolated incidents of violent demonstration in the national capital were reported. The first indication of something bigger brewing came when the cavalcade of the Sikh President of the Nation, Giani Zail Singh, was attacked by stone throwers.

On night October 31/November 01, organised and equipped gangs dominated the streets of Delhi and were involved in acts of violence and destruction of property. Sane voices within the city urged the government to intervene but the response was merely cosmetic. The first murder took place the next morning at about 0900 hours and then the floodgates opened. The madness perpetuated in Delhi found resonance in the other parts of the country.  On the face of it, restrictive actions like curfew were announced but they were not implemented on ground.

In this environment of utter depravity the only saving factor was such people who came out to help the Sikhs despite the grave dangers involved. They gave shelter in their houses and later provided assistance in the refugee camps opened for such persons who lost everything in the genocide.

The complicity of the political party in power became more visible when its leader, Rajiv Gandhi, failed to condemn the wanton killing of Sikhs. He, on the other hand, attempted to justify the same.  “We must remember Indiraji. We must remember why she was assassinated. We must remember who could be the people be behind it. When Indiraji was assassinated, some riots took place in our country. We know the hearts of Indians were filled with anger, and for some days, people felt that India was shaking. But when a big tree falls, then the earth does shake a little,” he said in a condolence rally organised in commemoration of his mother, the demised prime minister.

It becomes quite apparent that the plan for attack was carefully laid out by certain perpetrators and meticulously carried out for a specified period of time. It was only when the desired impact was achieved, the “lesson taught” and when international pressure started mounting that it was stopped. Surprisingly, it stopped as quickly as it started which again points towards its micro-management by certain powerful forces.

The sequence of events nullifies the argument of “grave and sudden provocation” which is being used by legal elements to lower the gravity of the criminal and barbaric genocide committed.

No First Information Report (FIR) was filed in the immediate aftermath or cases registered in court, nor did any court call for action as is the trend now. In the last 35 years since perpetration of the genocide, four commissions, nine committees have looked into the carnage. In recent times, since, 2015, two Special Investigation Teams (SITs) have been constituted to carry out investigation.

Going back to 1984, when international pressure became too much, the government constituted a committee under Ved Marwah, Additional Commissioner of Police. It was constituted in November 1984 and dissolved in 1985. The proceedings of the Marwah Committee were handed over to the Misra Commission whose findings were made public in February 1987. The commission stated that its term of reference was to determine “whether the violence had happened”, and not “identify any person” or their role. It further recommended that three more committees be set up, (1) to look into the role of the police, (2) for registration of cases, (3) to determine the total number of killings. This sham enacted over three years was followed by a series of committees

The tryst for justice gained momentum once more in the year, 2000, when the NDA Government, under Prime Minister Atal Bihari Vajpayee, was in power. A unanimous resolution was passed in the Rajya Sabha, resulting in the formation of a new commission under retired Supreme Court Judge G.T. Nanavati. The commission issued notices to HKL Bhagat, Sajjan Kumar and Jagdish Tytler among others, all Congress leaders known to be close to Rajiv Gandhi. It also added the name of Kamal Nath in the list. Shamefully, Kamal Nath is now Congress Chief Minister of Madhya Pradesh.

The report submitted by the Nanavati Commission in May, 2005, was damning in its observations. “The systematic manner in which the Sikhs were thus killed indicate(s) that the attacks on them were organised,” it said.

“Large number of affidavits indicate that local Congress (I) leaders and workers had either incited or helped the mobs in attacking the Sikhs… There is enough material on record to show that at many places the police had taken away their arms or other articles with which they could have defended themselves against the attacks by mobs,” it added.

According to open source media reports (The Print), of the 587 original FIRs registered as per the Nanavati Commission, only 25 of the cases have so far resulted in conviction, of which only 12 are murder cases.

Recent times have witnessed the constitution of the Mathur Committee followed by the Central government SIT in 2015. Presently matters are in the hands of a SIT constituted by the Supreme Court in 2018 that is re-investigating 186 closed cases.

In the last 35 years, justice for the hapless Sikh victims of the genocide has not been forthcoming in the national capital, New Delhi, what to speak of the other states where even the process has not taken off. Every year on November, 01, media shakes out the cases from its files, a few victims whose address is available are approached to give statements. In their hand they hold photographs of their kin who were mercilessly killed and maimed and cry their heart out. This sentimental copy, good for TRP is played out over the day and stories are carried in Op-Ed pages of newspapers. After that, it is back to business as usual.

This year, as the world gears up to celebrate the 550th Birth Anniversary of the first Guru of the Sikh religion, Guru Nanak Dev Ji, it would be only appropriate for the nation, its Government and most importantly Prime Minister Narendra Modi, to ensure dispensation of justice to the faithful followers on the great Guru who have being wronged in the most brutal, sadistic and inhumane manner for no fault of theirs. No bigger tribute than this can be paid to Guru Nanak Dev Ji.

(Jaibans Singh is a reputed journalist associated with Centre for Socio-cultural Study, Punjab)