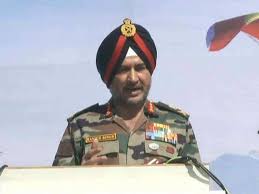 Lieutenant General Ranbir Singh, General Officer Commanding-in-Chief (Army Commander), Northern Command,  Indian Army, made some significant observations on the politico-strategic situation obtainable in Jammu and Kashmir, especially the Kashmir Valley. He spoke on the subject on Wednesday, October, 17, in the backdrop of the closing ceremony of the first Inter-Service Paragliding Accuracy Competition at Palampur, Himachal Pradesh.

While asserting that the Indian Army and other security forces operating in Jammu and Kashmir are firmly in control of the situation, Singh made no bones about Pakistan’s continued efforts to infiltrate terrorists into the state. “The situation is under control. However, the situation remains fragile because of the attempt by Pakistan to push infiltrators in Jammu and Kashmir. As per inputs available to us, there is no change in terrorist infrastructure across the LoC in Pakistan Occupied Kashmir, and therefore, we keep having several reports of infiltration attempts by Pakistan trained terrorists,” he said.

The statement made by the Army Commander is all the more  noteworthy since it has come in the wake of an open threat by Pakistan Army, conveyed by  none less than the chief of its media branch, that Pakistan would launch ten surgical strikes if India launches one. Lt. General Ranbir Singh dealt with the cowardly threat with the disdain that it deserved by saying the Indian Army is prepared for any contingency and will exhibit its capabilities when required.

While on the subject, the General also allayed all fears being created by certain evil vested interests about the capability of the army to counter threats to the nation. “It doesn’t really matter what statements are made from which quarter, it is important for us to retain and refine our capabilities and be prepared for any contingencies at all times,” he said while adding that the Army continues to be a “potent, responsible and accountable instrument of national power.” It is important to note here that Pakistan is spending millions across the world to create an impression of the Indian Army being weakened due to equipment and budgetary constraints. The statement by Lt. Gen. Ranbir Singh would ally all fears that are thus sought to be created.

The Indian Army, along with the Jammu and Kashmir Police and the paramilitary forces, has been carrying out sustained and consistent counter-terrorist operations in the Kashmir Valley, despite an attempt by inimical and anti-India forces to garner local support against such operations. Just a few days earlier a terrorist, Manan Wani, and his accomplice were killed in a counter terrorist operation; he was an educated person who had left a Phd course in Aligarh Muslim University to take on to terrorism in January this year.  His elimination was played up by enemy propagandist forces in the Kashmir valley by terming him as a martyr and a “scholar militant.” The objective was to create an impression of the so-called militant movement finding support from the educated segment of the Kashmir population. On Wednesday itself, when the Army commander was interacting with the media, a gun battle between terrorists and security forces broke out in Fateh Kadal in downtown Srinagar in which three terrorists, including a wanted Lashkar-e-Toiba (LeT) commander, were killed.

Against the aforementioned backdrop the media was, quite naturally, keen to get the views of the Army Commander on the subject. The Army Commander was candid in giving an assurance that the security forces had the situation well under control. He also gave a humane appeal to the youth to stay away from evil indoctrination by the enemy and engage their energies in productive purposes.

“Our counter-infiltration grid at LoC, at various tiers of the grid up to the hinterland, is very effective and it is because of that we have been able to neutralise a large number of terrorists,” said Lt. Gen. Singh in a clear message to those pursuing the path of terrorism that they will not be allowed to carry out their nefarious designs and that the forces will not allow the common man to feel insecure or intimidated.

While reaching out to the youth like Manan Wani the Army Commander said, “The Army is fully cognisant of the ground realities; there is a lot of potential in the youth in Jammu and Kashmir and the army’s efforts are always towards harnessing these energies for the good of the state and the nation.”

The assurance of the Army’s commitment toward the smooth conduct of Panchayat elections came at a time when the violence free nature of the polls just completed is being applauded far and wide.

Lt. General Ranbir Singh has been very forthright and up front in his assessment of the situation in Jammu and Kashmir and the manner in which the army, under his watch, intends to deal with the same. Those pursuing the path of terrorism will not be given any respite even as the forces will join hands with all such initiatives that are directed towards weaning away the youth from being misled by evil foreign sponsored best replica rolex propaganda.  So far as Pakistan is concerned, the army will remain ever watchful and vigilant to thwart any and every challenge posed by the country and will give a befitting reply to the same.

There was no hesitation whatsoever in the words and demeanour of the General when he spoke of the preparedness of his troops to take on the recalcitrant neighbour and its malevolent machinations.

General Singh has put forth a clear headed articulation of the policy that his command will pursue in ensuring the safety of the citizens as also the sovereignty and integrity of the nation in the frontier state of Jammu and Kashmir. He needs to be appreciated for his forthrightness and commitment to the cause of the nation and its people. It is hoped that those pursuing the path of violence and those perpetrating turmoil in the region, from across the border and within, will read the lips of the Army Commander and shun the evil pursuit in favour of peace and tranquillity. An inability to do so will lead them only to shame and ignominy.

(Jaibans Singh is a reputed columnist, analyst and speaker)