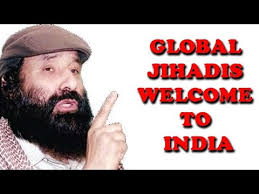 Is it the end of the road for Syed Sallahuddin and his terrorist organisation, the Hizbul Mujahideen (HM), in Jammu and Kashmir? After thirty years of existence he is now fighting a losing battle for survival, clutching at straws to stay afloat in a situation that is fast going out of his hands.

Gone are the days when he could issue diktats to the Government of Pakistan and the people of Jammu and Kashmir. Today, he is desperately holding on to the depleted strength of his cadre in the state while trying hard to hide the fissures in his organisation. It is, by now, common knowledge that breakaway groups of the HM are gaining eminence by the day.

The HM was founded in 1985 by Muhammad Ahsan Dhar, it soon gained notoriety as a terrorist organisation. Syed Sallahuddin, took leadership of the organisation on expulsion of Dhar in 2002. He also became Chairman of the United Jihad Council, a group of Pakistan based terrorist organisations charged with the responsibility of destabilising Jammu and Kashmir.

Till a year back, Syed Sallahuddin had the gumption to threaten the people of the state, especially the Kashmir valley, against participation in the state assembly and parliamentary elections. The HM put up posters on its letter head saying, “beware. If you vote, you will bear the consequences.”

The fact that the polls went off without a hitch and the people came out in large numbers to vote was the first “Chink in the HM Armour.” It became quite apparent that the organisation no longer enjoyed the kind of hold over the people that it had not too long ago.

The HM got a new leash of life due to reports of its cadre strength in Jammu and Kashmir growing even as its sister organisations, especially the Lashkar-e-Toiba (LeT) were depleting. This had, in fact, more to do with the inability of the Pakistan army to infiltrate its trained mercenaries than any reawakened lure for the HM among the Kashmir youth.

Statistics proved that the number of locals getting into the HM fold was drastically less than that obtained in the previous years. Even as the so-called rising fortunes of the HM were played up by its leaders the actual situation pointed towards a drastic fall in cadre strength.

Those joining the ranks presently have neither the training nor the motivation of their predecessors. They are poor, misguided young boys who have been trapped into a no-win situation. They do not realise that the cause that they are being called upon fight for has been lost a long time back and they are simply there to keep their Pakistani masters afloat. In other words, they are cannon fodder, destined to be eliminated sooner than later.

Sallahuddin’s feeling of supremacy was short lived as he faced a bigger crisis in the form of an internal revolt. His oldest aide and most trusted commander on ground in Kashmir, Abdul Quyoom Najar, raised the banner of revolt and created his own outfit, the Lashkar-e-Islam (LeI). It is believed that as many as twenty terrorists of the HM cadre have joined LeI and some foreign terrorists operating in the valley are also ready to give allegiance to the organisation.

The hidden hand of Pakistan’s Inter Services Intelligence (ISI) in engineering this split cannot be ruled out. ISI has been noticing, with concern, the waning clout of Syed Sallahuddin. It is conscious of the fact that what is left of terrorism in Kashmir is a small group which is depleting by the day. A set up of this nature would be better controlled on ground rather than through a remote based in Pakistan. Najar comes across as an apt for the same.

The manner in which Najar terrorised the telecom sector in Kashmir sent shock waves down the spine of Syed Sallahuddin and his all time mentor, Syed Ali Shah Geelani. They were not ready to confront such a strong force all of a sudden. Their immediate reaction was to condemn the intimidation and killings, put the blame of the security forces and deny the existence of a splinter group.

Concerned about the growing strength of the Najar group, Sallahuddin, finally decided to react.  Recently, the HM killed three members of the LeI who, in retaliation, killed one of the HM. This internal bloodletting has caused panic among the people of Kashmir. Earlier, their cheap rolex replica misguided sons were targeted by the security forces, now they have become targets of an internecine gang war and are falling like nine pins.

The security forces have every reason to be happy about the emerging situation. While the terrorists are busy killing each other within the state, infiltration has come to a virtual dead end despite desperate cease fire violations across the line of control. The forces, however, continue to advocate caution on the sensitive issue of troop withdrawal as, “any such move will help forces inimical to peace to take control of things and disrupt peaceful atmosphere in J&K again.”

Syed Sallahuddin is now busy trying to build up a pan-Islamic Jihad image of the HM and the UJC by equating their activities in the Kashmir valley with what is happening in Syria and Iraq. By so doing, he is trying to garner support for his lost cause from the likes of the ISIS, Al-Queda and the Taliban.

It goes without saying that such an alliance would be out of sync with the reality on ground. The people of Kashmir have demonstrated, over and over again, their disinclination to be a part of any such radicalised misadventure. They simply want to carry on with their lives peacefully.

It is very clear that the clout of Syed Sallahuddin and those of his ilk is on the wane more because of rejection of their ideology by the people of Kashmir than any other reason. It would be best for them to

fade into the background.